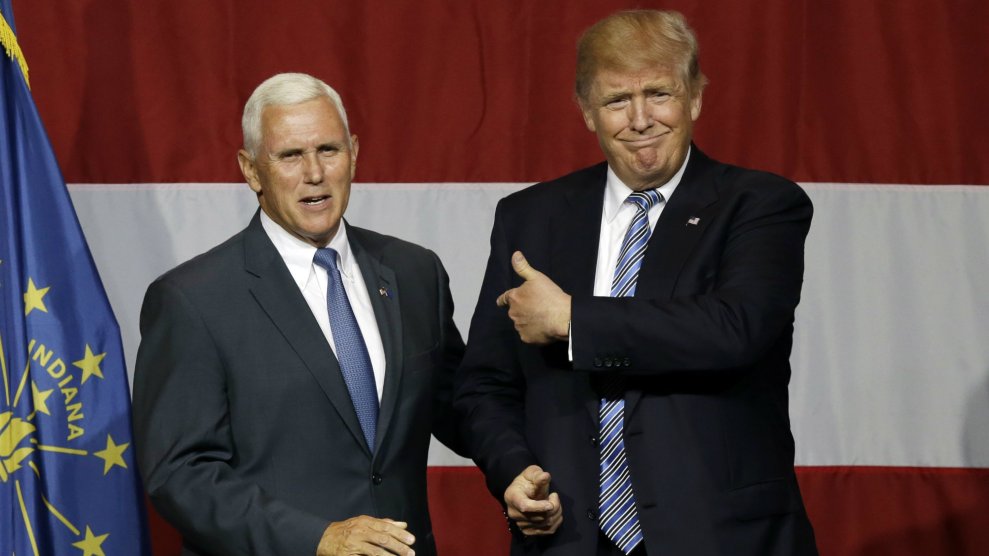 Donald Trump has reportedly narrowed his vice presidential candidates to a short list of five men, plus “two that are unknown to anybody.” The five known candidates’ environmental records are about what you’d expect, considering that their potential boss once referred to climate change as a Chinese hoax. Here they are:

Pence is an Evangelical Christian and creationist who once told Chris Matthews that the science on climate change is “very mixed.” Last year, 22 scientists wrote Pence an open letter offering to help Indiana address its unique challenges due to climate change. Pence did not take them up on it, but he signed Indiana up to help derail President Barack Obama’s Clean Power Plan.

In the middle of his own bid for the presidential nomination, the New Jersey governor referred to Trump as a “carnival barker,” a “13-year-old,” and “thin-skinned.” Then Christie endorsed him. He’s had a similar approach to climate change. Although Christie says there is “no use in denying global warming exists,” he contradicts himself by not wanting to do anything about it.

Gingrich used to think Congress should address climate change—as seen in the bizarre commercial with Nancy Pelosi embedded below. But apparently he changed his mind sometime after 2008. Last year, he criticized the Paris climate summit in the Washington Times, writing, “Nothing that happens there will affect the climate. Wishes don’t power the global economy; fossil fuels do.”

When Gingrich ran for president in 2012, he promised $2.50 gas if the United States approved the Keystone XL pipeline and opened the Gulf of Mexico to unrestricted drilling. Since then, gas prices have come down just fine without President Gingrich.

The 33-year Army veteran who briefly served as the director of the Defense Intelligence Agency in the Obama administration is a registered Democrat—or at least he was before Trump started eyeballing him. After the recent mass shooting in Orlando, Flynn attacked Obama for focusing on little matters like climate change. “And here we have the president of the United States up in Canada talking about climate change,” Flynn said. “I mean, God, we just had the largest attack…on our own soil in Orlando. Why aren’t we talking about that?”

Ranked one of the most conservative members of Congress, Sessions was the first senator to endorse Donald Trump. He’s also hardliner on immigration and shares Trump’s affinity for making racist comments. Sessions has repeatedly insisted there’s been “almost no warming” in the past 25 years, contrary to all the evidence otherwise. But while Sessions may not accept climate change, the good news is he does believe in magic.