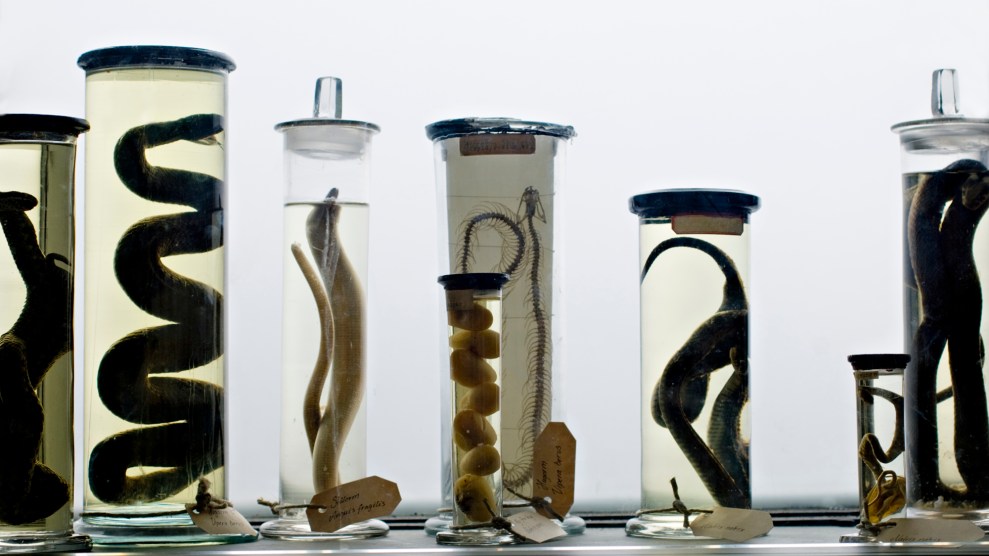 If you’ve ever visited a natural history museum and wandered past towering dinosaur skeletons and wild animals in display cases, you might be surprised to know that you probably saw just a fraction of the treasures held in that facility. Tucked away in the recesses of these familiar buildings, out of sight from the public, are rows and rows of meticulously preserved plants, insects, and animal carcasses. Though rarely seen by the general public, the vast, hidden collections have a life of their own as a hub of scientific research.

Scientists use these troves of curiosities to identify new diseases, map invasive species, and study the effects of climate change. For example, in 1993, researchers used a collection of frozen mice at the Museum of Southwest Biology to identify the origin of a dangerous strain of hantavirus—a mysterious and fatal disease that had emerged in the American Southwest. And in California, a large zoology collection has helped biodiversity experts find evidence of climate change adaptation among local wildlife.

During a recent episode of the Inquiring Minds podcast, Jack Dumbacher, chairman and curator of the California Academy of Science’s Department of Ornithology and Mammalogy, gave host Kishore Hari a glimpse into the hidden world of museum collections. The California Academy of Science contains specimens that are up to 200 years old, and each one is carefully organized and easily accessible to researchers, just like books on a library shelf. Looking for an obscure species of insect? Just pull out a drawer and you can examine one of 10 million specimens held in the museum’s entomology collection.

“I like to think of it as the most complete and tangible and permanent record of life on Earth,” Dumbacher said. You can listen to the full conversation below.

Maintaining an enormous collection of painstakingly preserved specimens is, not surprisingly, pretty expensive. And in recent years, these biological time capsules have been threatened by shrinking budgets and staffing shortages. According to Smithsonian.com, government funding cuts have pressured museums to shift their focus from collections management and scientific research to exhibitions and public entertainment. This March, the National Science Foundation announced that it would pause its funding of collections infrastructure—money that normally goes to the critically important upkeep of these collections. Scientists warn that if these archives fall into disrepair, it would threaten future research.

“It’s not very sexy to pitch it to a donor to be like, ‘Will you buy us more alcohol or more formalin for our specimens?'”

“The sad reality is that it’s not very sexy to pitch it to a donor to be like, ‘Will you buy us more alcohol or more formalin for our specimens?'” said Emily Graslie who runs the YouTube series The Brain Scoop, which showcases the behind-the-scenes work of natural history museums. “What we fail to remember is that a lot of the new advancements that are happening in biology and health have roots back in museums’ collections.”

Museum curators and researchers have decried the funding cuts as “incredibly short-sighted,” arguing that biological collections are “the bedrock of a lot of contemporary science.”

Even recent efforts to digitize these collections cannot account for all the untapped information that each specimen contains. Without maintaining the physical collections, digital catalogs risk leaving out critical information that scientists may not even be aware of yet. Right now, researchers are mapping the DNA of some specimens that were originally collected before scientists even knew what DNA was. If those plants and animals had been preserved only in the form of images and field notes, that DNA wouldn’t be available to us today. After another century of technological and scientific advancement, who knows what kinds of questions these collections will be used to answer?

Graslie points out that catalogs of species such as the Aedes aegypti mosquito exist so that when a new disease like Zika emerges, scientists and public health officials are equipped with the information they need to respond quickly and effectively. But until such an immediate threat materializes, the slow work of building these archives often goes underappreciated.