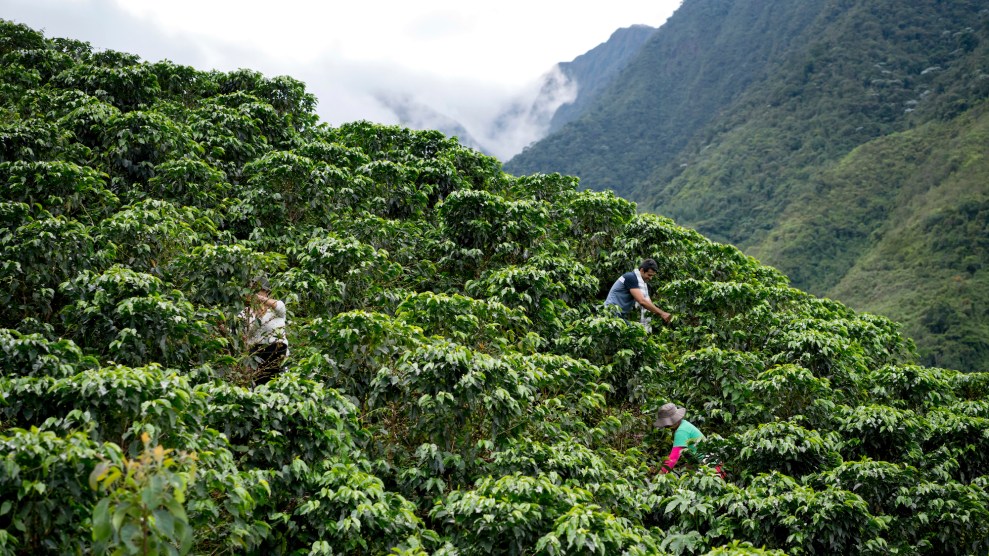 Workers harvest coffee cherries in the Colombian highlands. <a href="http://www.istockphoto.com/photo/group-of-farmers-collecting-coffee-beans-gm538908564-95969441?st=_p_coffeeplantation%20worker">andresr</a>/iStock

“Put that coffee down,” Alec Baldwin growls at an underling in Glengarry Glen Ross. “Coffee’s for closers only.” According to a new report from the Climate Institute—commissioned by Fairtrade Australia & New Zealand—the beloved beverage may soon be an exclusive product indeed.

Researchers predict that land suitable for growing coffee will shrink by half in the next 30 years.

The villain: climate change, which is expected to fall hardest in the very region where coffee thrives, the tropics. Coffea Arabica—which accounts for 70 percent of the coffee grown globally, including your morning joe—requires the cool year-round temperatures and ample rainfall found in tropical highlands. Robusta (Coffea Canephora)—source of the the low-grade joe that supplies the instant market—also requires a tropical climate, but can tolerate warmer, drier conditions.

Both coffee species are already under pressure from climate change, the reports finds, and as the planet warms and weather patterns shift, the globe’s landmass suitable for coffee production is likely to shrink by half within three decades. And a key tool for maintaining coffee on a hotter planet is also under threat: Wild coffee plants, which “could prove vital in the development of new, drought- and disease-tolerant varieties at the very time when coffee farmers need them most,” could be driven to extinction within 70 years, the report warns.

Climate-related strains are already showing. An insect pest called the coffee berry borer, which causes about $500 million worth of damage to crops annually, has spread, “drawn by hotter, wetter conditions in places like Tanzania, Uganda, and Indonesia,” the report finds. Until around 2000, it thrived only at elevations below 5,000 above sea level. Warmer weather has expanded its range by more than 1,000 feet in some places, and the upward creep is expected to continue as temperatures climb. A fungal pathogen called coffee leaf rust has also taken advantage of warmer temperatures to expand its range, pinching coffee harvests in Guatemala and Colombia.

There’s much more at stake than just a morning ritual adored by hundreds of millions of people across the globe, including me—which will inevitably get more expensive as climate-related costs mount, the report notes. “Over 120 million people in more than 70 countries rely on the coffee value chain for their livelihoods,” the report notes. Their struggle to maintain their livelihoods and keep the globe supplied with coffee won’t be pretty. Many lack resources to reestablish plantations at higher altitudes, so they’ll be forced to abandon coffee altogether, essentially becoming climate refugees. And particularly in Asia, the report adds, moving coffee to higher altitudes will trigger deforestation—meaning more greenhouse-gas emissions and thus climate change.

So what can coffee-quaffing northern-hemisphere consumers do? Look for brands that that pay extra to support small coffee growers and help them adapt to climate change, the report suggests. But the authors make clear that averting a coming coffee dystopia will require more than enlightened consumerism: We can’t save coffee or protect the millions of people who produce it without cutting back greenhouse gas emissions worldwide.