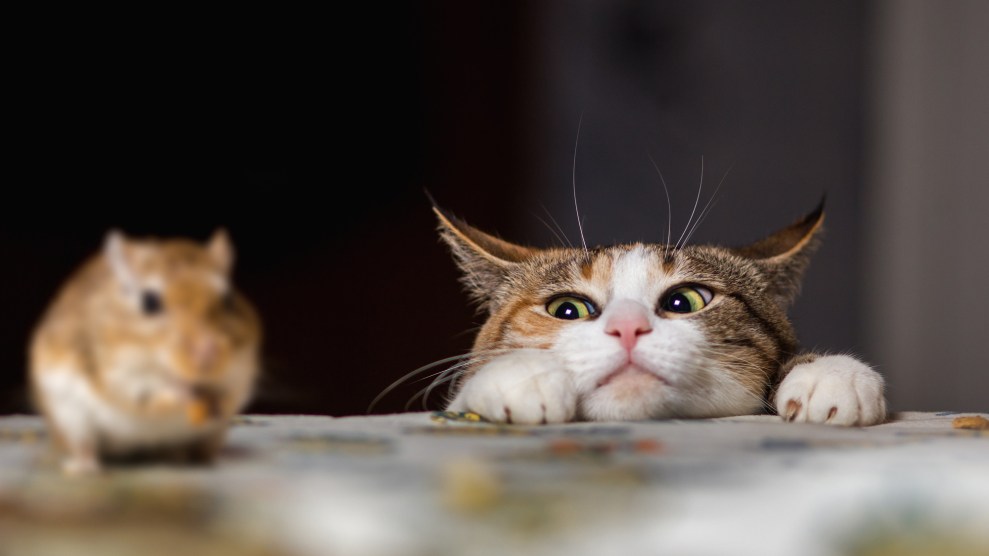 Few creatures are as cute, cunning, or controversial as the common household cat. Despite their taste for blood, enigmatic demands, and unpredictable mood swings, cats have managed to claw their way into homes, hearts, and Youtube channels like no other domestic animal. While these stealthy creatures are much better at stalking than being stalked, it’s believed there could be anywhere from 600 million to 1 billion house cats worldwide. On the most recent episode of the Inquiring Minds podcast, Indre Viskontas sits down with cat enthusiast and science writer Abigail Tucker to discuss her new book, The Lion in the Living Room, and to explore the complicated role cats have in ecological systems across the globe.

Here are 10 of the best cat facts from our interview with Tucker. We’ve mixed in some adorable cat videos, because—let’s not kid ourselves—that’s the whole reason you clicked on this post. You’re welcome.

And they’re really good at it. Unlike their ferocious lioness cousins that hunt in packs to take down prey, domestic cats use a solo stalk-and-ambush style of hunting that requires more brains than brawn for calculated, well-timed pounces. It’s this stealth that makes them so efficient at snagging even the most deft of critters.

4. More house cats are born every day than there are wild lions in the entire world.

If African lions could reproduce at the same rate as their domestic brethren, they’d probably have an easier time getting off the endangered species list. Lions typically only rear 2-3 cubs over a two-year period, but female domestic cats can become pregnant at just four months old and produce an average of 8-12 kittens a year. That’s a lot of kitty litter.

Snug as three kittens in a rug. ??

While it’s common to find cats in alleys where rats are prolific, that’s not actually because the cats want to feast on the rodents. As Tucker explains, what’s actually happening is that cats and rats are feeding on the same resource: trash.

They only meow to us. It’s just one of many ways they bend us to their will.

7. Cats are Native to West Africa and the Near East.

Today, however, they flourish on every continent except Antarctica.

8. Your cat is probably carrying a deadly brain-dwelling, baby-blinding parasite.

Toxoplasmosis is caused by a single-celled parasite called Toxoplasma gondii that’s transmitted through, among other things, cat feces, and can cause seizures and severe eye infections in people with compromised immune systems. Cleaning the litter box, touching anything that’s come in contact with cat feces, or ingesting contaminated soil, fruit, or vegetables (you know your garden is just a giant litter box, right?) are just a few of the ways Toxoplasma can find its way into your system. While complications are rare (pregnant women and infants are at a higher risk), more than 60 million people in the United States may be infected—most don’t experience any symptoms.

9. Cats are classified as an invasive species.

As mysterious, brilliant, and fluffy as they are, cats have developed quite the wrecking-ball reputation. According to the International Union for Conservation of Nature, Felis catus is one of the 100 worst invasive species on Earth. The list includes non-native species that “pose a major threat to biodiversity,” agriculture, and human interest.

10. Love them or hate them, cats have mastered human-animal relations like no other species.

They have us wrapped around their paw and they know it.

To hear more about how Felis catus became what Tucker calls “the most transformative invaders the world has ever seen” (as well as America’s most popular domestic pet), check out the rest of the the Inquiring Minds episode.