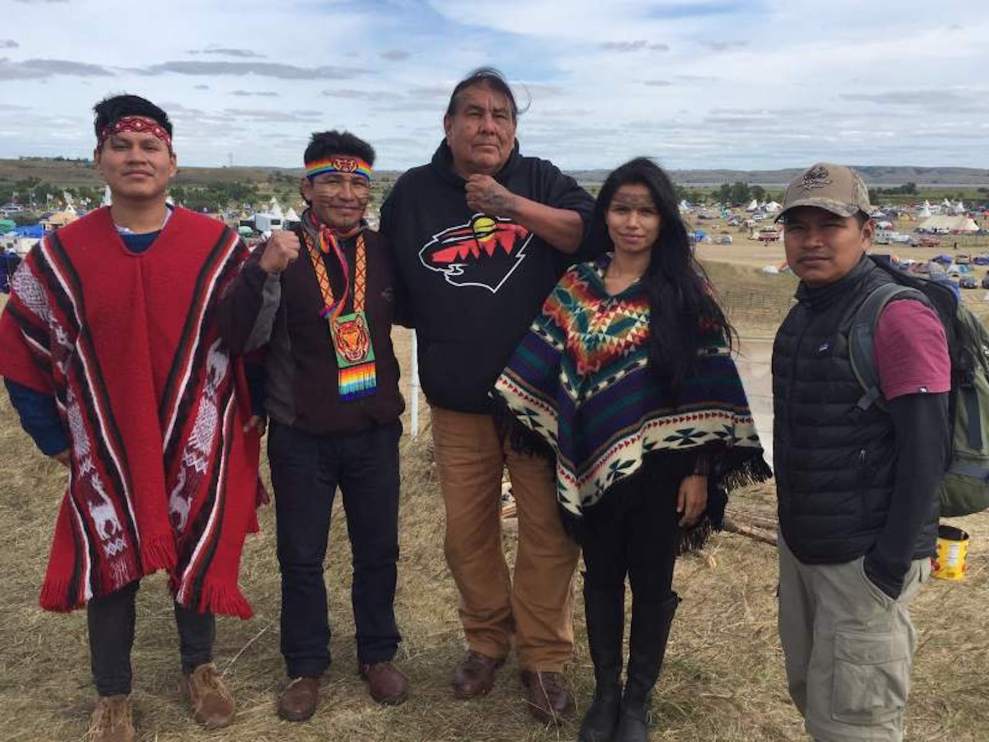 By the time three federal government agencies issued their joint statement halting construction of the Dakota Access pipeline on September 9, there were some 5,000 protesters on site in Cannon Ball, North Dakota challenging the project. The groups spread out over a massive campsite on the Standing Rock Sioux reservation, where the tribe says the proposed construction of the pipeline threatens their water source and sacred lands.

After hearing about the Standing Rock resistance, Native groups from all over the world came to stand in solidarity with the Sioux, traveling from Canada, Mexico, Brazil, and the Ecuadorian Amazon. The thousands of demonstrators represented some 280 different indigenous tribes, by far the largest Native American protest in recent memory and perhaps one of the largest ever recorded. The project’s construction permits are being reconsidered for violation under the National Environmental Policy Act, a process that will run through November 21. But no matter what happens with the pipeline, many of these demonstrators see the events at Standing Rock as a springboard for a larger indigenous solidarity movement.

It’s not simply an issue of indigenous land rights—many groups who showed up at Standing Rock are hoping to mount a larger unified effort to combat climate change. According to Leo Cerda, Ecuador field coordinator of the group Amazon Watch and member of the Kichwa tribe, the plight of indigenous land rights in the face of corporate resource extraction is a global phenomenon. Cerda, who hails from the Ecuadorean Amazon, traveled with a group of four all the way to North Dakota to show solidarity with the Standing Rock Sioux. “The indigenous struggle against governments and corporations is the same all over the world,” Cerda told Mother Jones. “We have been among the only people doing anything to stop climate change,” he added.

In Bolivia and Brazil, non-indigenous lands were deforested at nearly three times the rate of their indigenous counterparts.

A new study by the World Resources Institute, a resource management NGO, lends credence to that claim. Analyzing deforestation rates in Amazonian regions of Bolivia, Brazil, and Colombia over the course of 12 years, the WRI found that legally recognized indigenous forestlands experienced significantly lower rates of forest loss. In Bolivia and Brazil, non-indigenous lands were deforested at nearly three times the rate of their indigenous counterparts; in Colombia, the rate was double.

The study also found that indigenous forestlands in these three countries would provide between $25 and $34 billion in carbon sequestration over the next 20 years. The report urged for indigenously-held forestlands to become a central tenet of climate change mitigation strategies, a course of action conspicuously absent from Bolivia, Brazil, and Colombia’s Nationally Determined Contributions to the UN’s new climate deal.

Still, indigenous land protectors are not waiting around for legislative assistance. Instead, they are putting to use protest methods practiced at Standing Rock. Last Wednesday, CONFENIAE, a regional organization of 1,500 indigenous communities in the Ecuadorian Amazon, was surrounded and forcibly evacuated by 200 police and riot cops in relation to its role in blocking 29 proposed oil plots. According to Cerda, members of Amazon Watch are using police relation tactics learned in North Dakota to hold their ground and establish their rights. “We were surprised that the same sorts of rights violations by police happen in the so-called free world,” he said of his time in North Dakota. Currently, Cerda’s group is creating a camp of its own to protest land expropriation in the name of increased oil extraction in Ecuador.

The six-week governmental review process that will determine the fate of the Dakota Access Pipeline is slated to begin on October 11. Though there have been no early indications as to how that process might turn out, one thing is certain—indigenous groups worldwide will be watching.