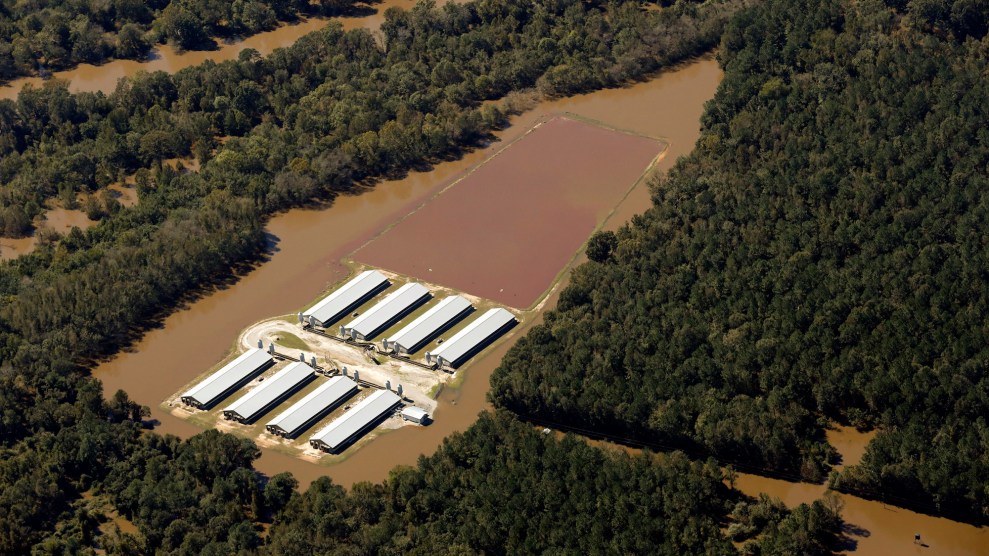 How much pollution leaked out of the flooded lagoon that collects manure from thousands of pigs housed in those barns? That's the crux of a battle between environmentalists, the hog industry, and state regulators in North Carolina. <a href="https://www.flickr.com/photos/waterkeeperalliance/30280172535/in/photostream/">Rick Dove</a>/Waterkeepers Alliance

“You gonna believe me, or your lyin’ eyes?” Versions of that joke have been cracked by comedians from Chico Marx to Richard Pryor; and it has gained a new relevance in North Carolina’s hurricane-ravaged, hog-dense eastern counties.

One expert believes the floodwaters displaced “a good deal” of the fecal fluid and sent it cascading downstream.

Late last week, while rivers were still flooding from Hurricane Matthew’s deluge, a watchdog group called the Waterkeeper Alliance published aerial photos of hog farms depicting a grim scene—massive cesspools, known by the industry as lagoons, leaking into floodwater or just completely subsumed. See my piece, and several of the photos, here.

But according to the North Carolina Pork Council (NPPC), pollution has been minimal. “There have been no reported hog lagoon breaches,” the industry group claims in an October 14 release. “There are 11 hog farms where floodwaters have inundated lagoons, but the majority of the wastewater will remain in the lagoons as flood waters recede.” The group estimates “fewer than 3,000 swine deaths” from the floods.

The NC Department of Environmental Quality gave me a similar report Monday afternoon. “We did an aerial tour over the weekend, and were heartened by what we saw in terms of not having the kind of catastrophic damage we had in 1999 from Hurricane Floyd,” spokeswoman Stephanie Hawco said. That time, leakage from farms contributed to a 350-square-mile dead zone in coastal estuaries. (It should be noted that the NC DEQ is currently under investigation by the US Environmental Protection Agency for not protecting the civil rights of the largely African American communities who live within smelling distance if North Carolina’s factory-scale hog farms.)

However, at least two Waterkeeper images depict what look an awful lot like breaches. Here’s one taken October 12: 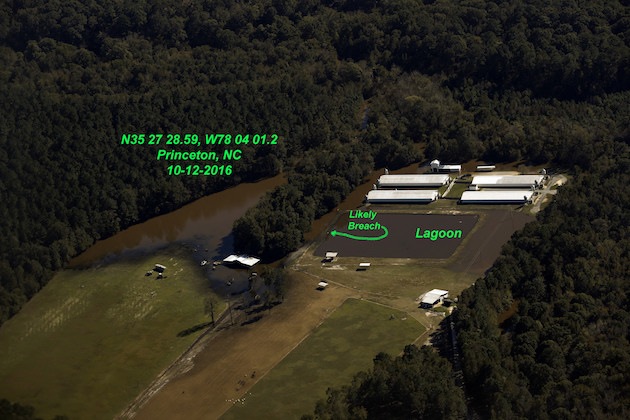 And another from October 10: 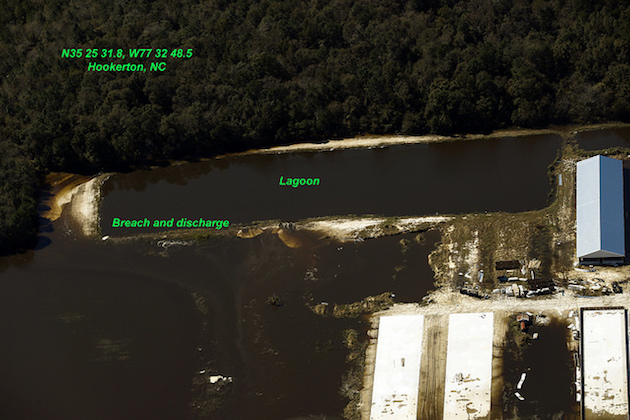 But the main battle here is over lagoons that have been subsumed by floods. According to the industry and the state, Waterkeeper Alliance’s images of inundated lagoons don’t mean much in terms of toxic manure leakages. The NPPC backs up its claim by distinguishing between breaches and inundation. In breaches, the group explains, “lagoon walls give way and can no longer hold back the wastewater—the contents of the lagoon are typically washed away and emptied into the surrounding fields.”

When a lagoon is flooded, by contrast, it remains “intact,” NPPC insists. “The floodwater runs over the lagoon and carries away only a small portion of wastewater that is heavily diluted,” the group claims. “Most of the wastewater remains in the lagoon and the environmental impact is greatly minimized.”

NC DEQ’s Hawco gave me a slightly different take on inundated lagoons. She said that while they don’t likely leak as much as breached ones, they have to be assessed on a case-by-case basis.

He said that normally, hog lagoons have a pink color—the result of microbes breaking down fecal matter. In several lagoons he has recently photographed—including one documented with pre-flood Google Earth imagery in my recent piece—”water is so far over the pits that they cannot be seen from the air,” he added.  And when the waters recede, “the pink is gone and replaced by the color of the floodwaters,” he said—suggesting that floodwaters displaced “a good deal” of the fecal fluid and sent it cascading downstream.

A team of Washington Post journalists reporting from the scene recently echoed Dove’s assessment. They observed a “filthy brown sea, a slurry of mud, debris, chemicals and waste, has overtaken miles of rural counties in North Carolina. Against the drab water, the shiny metal roofs of hog houses are impossible to miss, visible from the air, as are the rectangular and diamond-shaped outlines of massive lagoons constructed just feet away,” and noted “evidence of major environmental risks.”

But then, they were relying on their own eyes and noses, not sanguine reports from the hog industry.