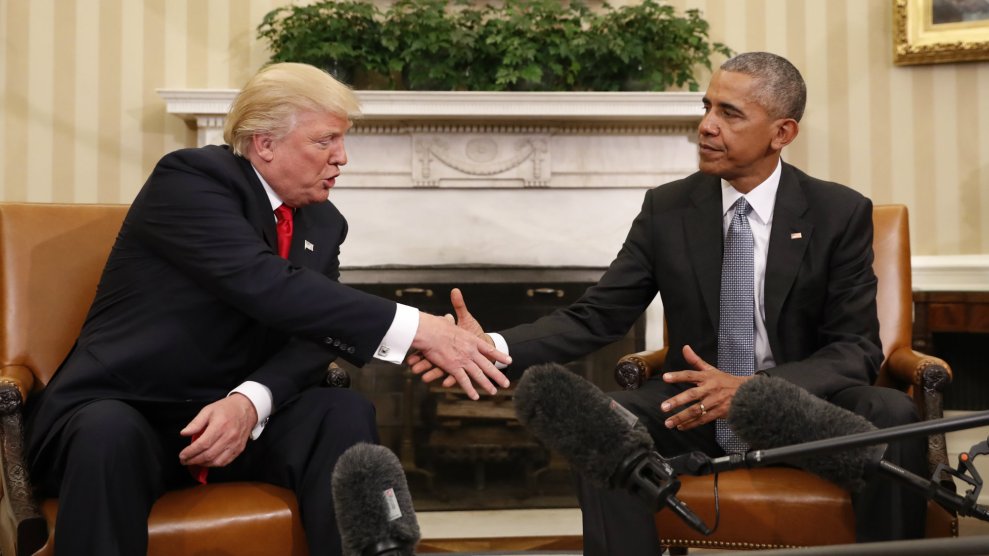 Ever since Donald Trump’s surprise victory in November, climate activists have been scrambling to find ways to safeguard the progress made by President Barack Obama in the fight against global warming. It won’t be easy. The president-elect has pledged to back out of the Paris climate agreement and repeal Obama’s limits on greenhouse gas emissions. But advocates believe they’ve found one final action Obama can take that Trump won’t be able to undo: funding climate action abroad.

In 2010, the United Nations established the Green Climate Fund, a mechanism for wealthy countries to finance efforts by poor countries to reduce their emissions and adapt to climate change. Four years later, Obama pledged $3 billion to the fund. In March this year—despite objections from the GOP-controlled Congress—the administration submitted its first payment of $500 million. The funds came from the Economic Support Fund, $1.9 billion that Congress had already appropriated to the State Department for the promotion of economic and political stability in countries with special conditions.

Climate advocates were hoping that the next president would continue to support the GCF by making contributions over the next several years. But Trump has made it clear that making payments to the fund and combating climate change in poor countries will not be priorities for his administration. In October, the Trump campaign pledged to “cancel billions in payments to UN climate change programs” and instead use the money to “fix America’s water and environmental infrastructure.”

So climate activists are calling on the White House to deliver the rest of the funds before Obama leaves office on January 20. Last week, more than 100 organizations, led by Corporate Accountability International, signed a letter urging the Obama administration to hand over the remaining $2.5 billion to the GCF before Inauguration Day.

The basic idea behind the fund is that developing countries did little to cause the problem but in many cases will be hit with huge climate impacts that they can’t afford to deal with. “It’s set up that way because wealthy countries are predominantly responsible for the crisis of climate change,” says Jesse Bragg, who is Corporate Accountability International’s media director. “The total budget is $100 billion, which is a drop in the bucket compared to what it will cost.”

Developing countries will use the money for renewable energy projects. “It will also be used to assist with projects and programs that will reduce the risks of climate-related disasters,” says Michael Burger, an environmental law expert at Columbia University, who added that many of those disasters can be linked to the United States’ consumption and greenhouse gas emissions.

“The debt for the damage inflicted on the global climate by American carbon will never be fully repaid,” Bill McKibben, the founder of 350.org, said in the Corporate Accountability International press release. “And the Trump administration can be counted on to do nothing for the most vulnerable people on the planet.”

Activists hope that because Obama was able to make the first payment despite a hostile Congress, he can do it again. Republicans made a lot of noise over the transfer but ultimately weren’t able to reverse or cancel the payment. “It’s no small feat to move this amount of money in this amount of time, but we’ve seen the administration take similar action before,” says Bragg.

The clock is ticking. “Any transfer that is made and completed would not be reversible,” says Burger. “But, it will certainly be within the Trump administration and the incoming Congress’ power to withhold future payments.”

“This is Obama’s legacy at the end of the day,” adds Bragg. “Is he going to let everything he’s done on climate be unraveled by Trump?”