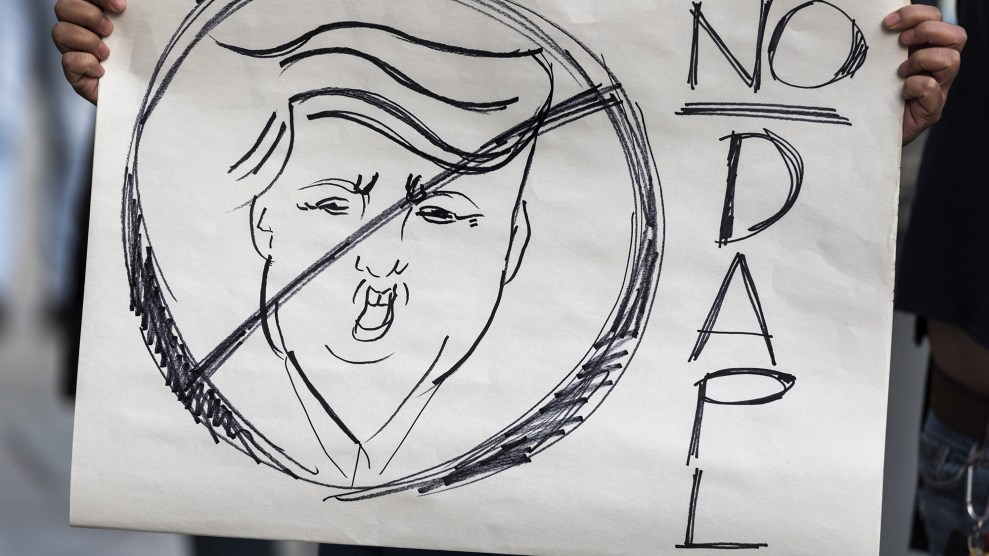 Despite the celebrations taking place at the site of protests against the Dakota Access Pipeline (DAPL), experts say the recent decision to stop the pipeline could be reversed by the Trump administration or the next Congress. “Legally, this is an action that can be overturned easily,” says Sharon Buccino, an attorney and director of the Land and Wildlife program at the National Resources Defense Council.

On Sunday, in a stunning surprise, the Army Corps of Engineers denied Energy Transfer Partners (ETP), the Dallas-based company building DAPL, the easement permit it needs to complete construction under the Missouri River. The Army Corps recommended studying alternate routes that would bypass the Standing Rock Sioux reservation and its water supply.

But according to Deborah Sivas, a professor of environmental law at Stanford University, there are multiple ways the pipeline might still be completed legally in its current location. The Republican-led Congress could vote to clear the way for ETP to drill under the Missouri River by passing an appropriations rider. Then the company would no longer need an easement from the Army Corps to comply with the Clean Water Act, and could thus complete the pipeline. “Trump could sign off on it in week one,” Sivas says. “All it takes is one sentence.”

“Trump could sign off on it in week one. All it takes is one sentence.”

Alternatively, according to Buccino, Congress could exclude public input from the environmental impact statement ordered by the Army Corps, excluding Standing Rock Sioux tribal members from participating and thereby sidestepping complaints that the project desecrates sacred burial sites. Such actions would likely be subject to public criticism, she acknowledges. Buccino also points out that Jo-Ellen Darcy, the Army Corps official who made the announcement, was appointed by President Barack Obama and will leave her position in January. Trump and his administration officials could exert pressure and guidance on the Army Corps’ commanders to reverse their decision.

Trump has expressed his support for the DAPL project. Today a spokesperson for the president-elect issued a statement in support of completing the pipeline despite the Army Corps’ decision. “With regard to the Dakota Access Pipeline, that’s something that we support construction of,” said Jason Miller, “and we’ll review the full situation when we’re in the White House and make the appropriate determination at that time.”

ETP, meanwhile, has promised to fight the Army Corps’ decision. In a statement released Sunday night, the company said it was “fully committed to ensuring that this vital project is brought to completion and fully expect to complete construction of the pipeline without any additional rerouting.” It added, “Nothing this administration has done today changes that in any way.”

“I’m encouraged we will restore law and order next month when we get a president who will not thumb his note at the rule of law.”

North Dakota Rep. Kevin Cramer said he shared ETP’s frustration. “Roads, bridges, transmission lines, pipelines, wind farms and water lines will be very difficult, if not impossible, to build when criminal behavior is rewarded this way,” Cramer said, referring to the anti-pipeline protesters. “I’m encouraged we will restore law and order next month when we get a president who will not thumb his note at the rule of law.”

Jan Hasselman, an attorney for the Standing Rock Sioux tribe, remains confident the Army Corps’ decision signals a “historic victory” and sends a clear message that the “era of trampling over indigenous people’s rights is over.” While he is concerned about a Republican Congress pushing back, he believes that if Trump tried to overrule the Army Corps’ decision with an executive order, such an action would be unpopular and might not stand up in court. “It’s a higher bar than you think,” he says, noting that President George W. Bush’s attempts to roll back Clinton-era environmental policy measures were repeatedly challenged in federal court.

The Army Corps is “dancing a fine line,” Sivas says. She believes its recent announcement is a largely a gesture. “They are basically doing something symbolic for the tribe and kicking the can down the road,” she says. The statement is “meant to make it as hard as possible for new administration to reverse, based on precedent.”

At the Ocheti Sakowin camp, the main protest site near the Standing Rock Sioux Reservation, the number of anti-pipeline protesters has swelled to as many as 15,000, including around 2,000 Armed Forces veterans who have vowed to defend the protesters by forming a “human shield.” As a blizzard set in Sunday night, campers celebrated by setting off fireworks. “This is a huge victory,” said Dallas Goldtooth, an organizer for the Indigenous Environmental Network. Later in the evening he tweeted, “We need to own this shit. This decision by the Army Corps? Yeah….WE made it happen.”

“I haven’t seen my family in two months,” one man at the camp mused tentatively. “I guess I can go home now if I want?”