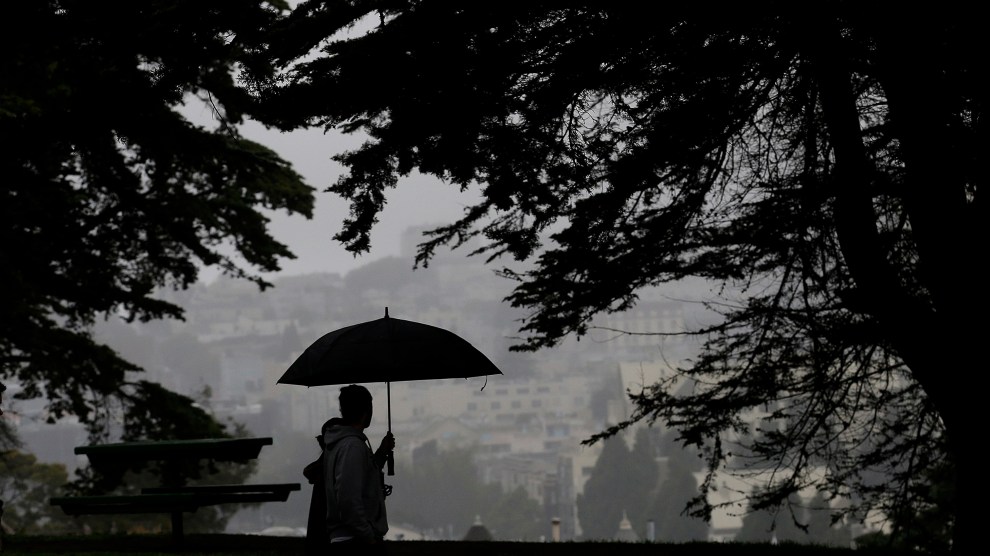 It’s been pouring in rain-starved California for the past few weeks, so is the Golden State’s drought finally over?

The downer answer: Asking if California’s water woes are behind us because it rained is a bit like asking if climate change is over because it’s cold outside—short-term gains don’t mean the long-term problem has gone away.

The slightly more optimistic answer: While we’re not in the clear, the rain has made a huge dent in the short-term.

Before and after: Compare ski resort drought years with 2017 https://t.co/kwgAH1fMMt pic.twitter.com/L7AWch4PMy

After years in the red, California’s reservoirs now have 14 percent more water than their historical averages. That’s key, as they transport water from the Sierra Nevada to California farms and cities, from San Francisco to San Diego. Snowpack in the Sierras is also above average, which—in addition to making the mountains into a veritable winter wonderland—will help feed reservoirs and recharge groundwater supply as it melts throughout the year.

As this Los Angeles Times graphic shows, nearly half of the state is no longer in a state of drought, as defined by the US Drought Monitor.

California’s most severe drought-stricken areas shrank from 43% a year ago to 2% this week. That’s the lowest in years. pic.twitter.com/GYzqV9smMl

But that’s not to say that the drought is over—or will be any time soon. Groundwater, the supply of water in underground aquifers that serves as a savings account of sorts during dry years, is still low and getting lower due to overpumping, says Peter Gleick, chief scientist and president emeritus of the Pacific Institute. Because the rain has been concentrated in the northern half of the state, much of the Central Valley, the farmland that dominates the geographical center of California, is still in the midst of extreme drought. About 1500 wells are still dry in the Valley’s Tulare County, home to produce pickers and packers. And because of the warm weather, snow is melting more quickly than usual, leading it to run off into storm drains rather than seep, slowly and steadily, into the groundwater tables.

Perhaps most concerning, though, is that water system improvements that were gaining momentum during the drought will slow down, Gleick says.

During the drought of the past five years, state lawmakers began to put groundwater management policy in place. Cities encouraged homeowners to get rid of their lawns, which often use more water than the homes themselves. Residents started replacing inefficient toilets and shower fixtures. Farmers implemented more efficient irrigation systems. The state’s Water Resources Control Board recently released report on the feasibility of recycling water, which many environmental groups champion as a more efficient use of taxpayer dollars and energy sources than building desalinization plants, which distil seawater to produce more freshwater.

“Those were all steps in the right direction, but there’s a lot more that needs to be done. There just isn’t enough water for everyone anymore, even in a wet year,” says Gleick. “A couple wet years and the pressure disappears for a while.”