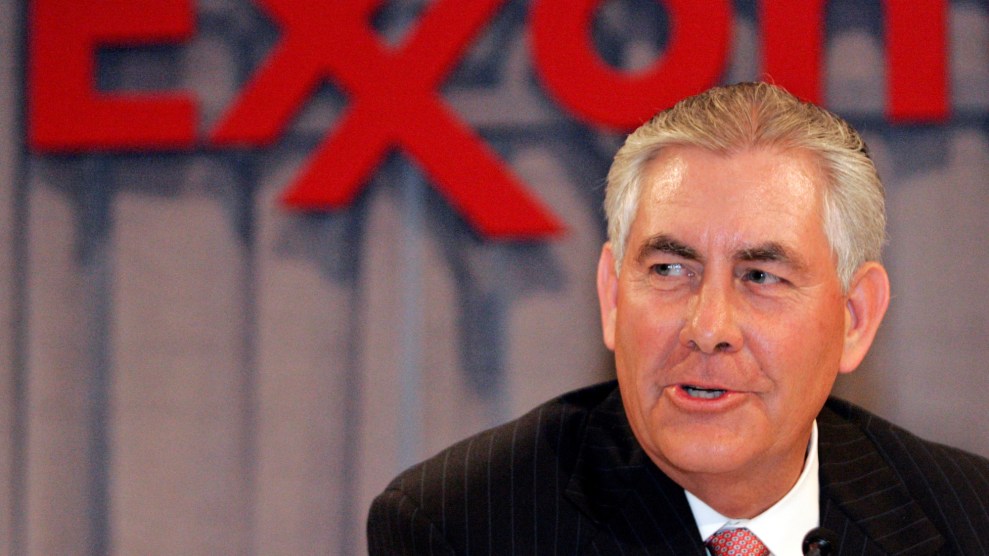 The Senate Foreign Relations Committee votes on Rex Tillerson’s nomination for secretary of state Monday. At his confirmation hearing earlier this month, Tillerson disappointed some senators with his unpreparedness or unwillingness to discuss a range of international issues. But Tillerson did have one line prepped and ready to go.

Whenever he was asked about the United States’ role in global efforts to tackle climate change, the former Exxon Mobil CEO said it was vital to remain involved in global warming negotiations. “I think it’s important that the United States maintain its seat at the table on the conversations around how to address threats of climate change, which do require a global response,” Tillerson said, repeating four different versions of that statement throughout the day. “No one country is going to solve this alone.”

“You can’t have a seat at the table if you put a hand grenade in the agreement.”

On its face, these words suggest good news. During the campaign, Donald Trump went so far as to promise he’d “cancel” the landmark Paris climate agreement, which the Obama administration negotiated with governments around the world. Since the election, Trump’s intentions have been less clear. The agreement officially went into force in early November, days before the election. That makes it more difficult to back out of, though Trump could throw a wrench into the works by insisting on Senate ratification or by beginning the slow process of formal withdrawal. (Or he could take the more drastic step of withdrawing entirely from the United Nation’s climate negotiations framework, which would take just a year).

Environmental groups and foreign leaders are holding out hope that Trump might backtrack on his campaign pledge. China’s special representative for climate change, Xie Zhenhua, told China’s state-owned newspaper that “the international community and US citizens will pressure the Trump administration to continue clean energy policies.” Trump seemed to leave the door open for such a move when he told the New York Times late last year that he had an “open mind” on the issue.

But is staying superficially involved any less destructive than withdrawing the United States entirely? As Vox‘s Brad Plumer notes, “There’s still a whole lot they could do to bog down global climate talks and hinder efforts to address climate change from within.”

Indeed, the unique structure of the Paris deal makes it vulnerable to swings in countries’ internal politics. Some 190 nations put forward domestic goals on climate change for 2025 and 2030, while agreeing to some basic transparency and financial guidelines, as well as to a process to reevaluate individual pledges every few years. This means that the agreement covers nearly all global carbon pollution. The downside is these pledges are voluntary, and even if every country were to fulfill them, the result would not be sufficient to limit warming to 2 degrees Celsius (3.6 degrees Fahrenheit)—the threshold above which many scientists say catastrophic changes would be inevitable. In other words, containing global warming will depend on the big polluters going beyond what they committed to in 2015.

So you can see why the Trump administration, already filled with climate change deniers, presents a significant problem.

Even if Trump signals he won’t actually “cancel” the agreement, there’s a lot of damage he can do from the inside.

“You can’t have a seat at the table if you put a hand grenade in the agreement,” says Jake Schmidt of the Natural Resources Defense Council. “Hopefully [Tillerson] realizes that.”

Trump has more than one hand grenade at his disposal.

For starters, Trump and his administration have expressed no interest in delivering on Obama’s promises to America’s negotiating partners. They have promised to scrap Obama’s signature domestic climate policy: the Environmental Protection Agency’s cap on carbon pollution from power plants. The United States could still conceivably lower its pollution footprint without those regulations, but it will be much harder, if not impossible, to deliver on Obama’s pledge to cut emissions 26 to 28 percent by 2025.

“You can have a seat at table, but what would you bring to it?” says David Waskow, a climate official at the World Resources Institute. Major players in global climate talks need to “lean in,” he added. “Part of leaning in is for the US to, under Paris, not walk away from a national climate plan.”

“For the US to walk away from that process and not fully engage and make sure that transparency works well would undercut our interests there.”

That’s not the only commitment on which the United States could come up short. The United States has so far sent $1 billion of the $3 billion that Obama pledged to the Green Climate Fund, which mobilizes international finance for climate action in poor, vulnerable nations. In the lead-up to Paris, experts described this type of aid as a carrot for persuading developing countries to slow the growth of their own carbon emissions in order to combat a crisis they had little role in creating. Congressional Republicans and Trump have pledged to cut global climate aid.

By not following through on two key pieces of the deal—the carbon cuts and the climate aid—Trump could undermine some of the United States’ long-term aims—namely, getting China to agree to a transparent independent body that reviews countries’ progress.

“There are some things that are in the Paris agreement that are specifically aligned with the objectives of the United States,” Waskow said. “For the US to walk away from that process and not fully engage and make sure that transparency works well would undercut our interests there.”

All this will matter most in 2018, when the next major round of climate negotiations will take place. Negotiators expect to use these talks to hammer out how countries will report their progress transparently. It will also be the site of the first “stocktake”—the mechanism the Obama administration pushed for to encourage countries to periodically reassess and ramp up their ambitions for carbon cuts.

If the United States were to show up empty-handed, other countries could backslide on their own commitments. And if Tillerson turns the State Department into a front for oil diplomacy, he could damage international efforts to switch from oil, gas, and coal to renewables.

In other words, a Trump administration could lower the bar of climate ambition while saving face internationally and remaining within the Paris agreement.

Still, some environmental advocates see this outcome as far better than the alternative. “Are we expecting that he is going to even be 50 percent of Obama’s leadership on this issue? No way, we’re not delusional,” the NRDC’s Schmidt said. “It’s one thing for us to totally walk away, another thing for us to be only half-hearted. Maybe the best thing we can hope for in a Trump administration is to not destroy the progress of eight-plus years and leave us in a position to pick up the pieces when Trump is out of office.”