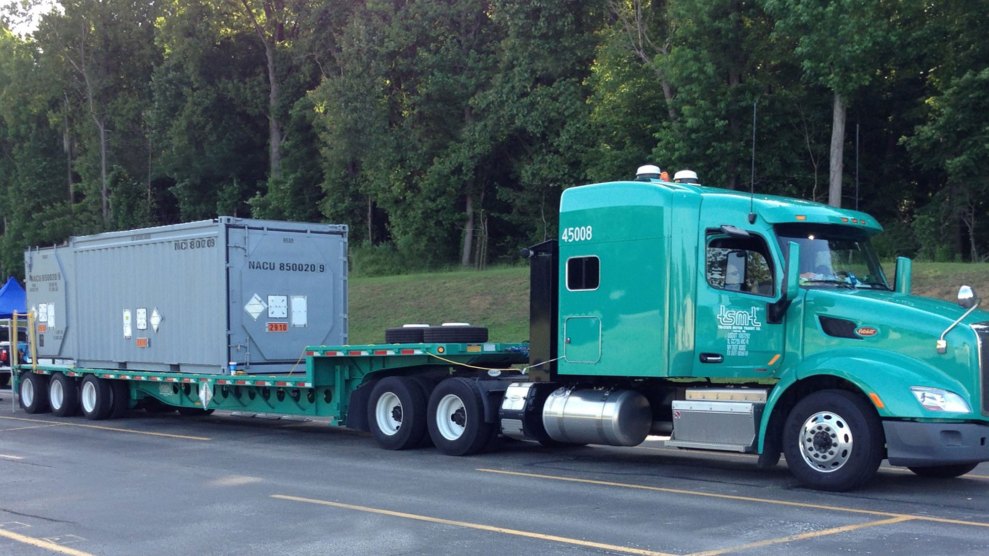 The Department of Energy, to the consternation of environmental groups, is preparing to transport 6,000 gallons of highly toxic liquid nuclear waste over American roadways.

The liquid waste will be transported in at least 100 to 150 truck trips over a three-year period.

The spent nuclear fuel is “target residue material” containing highly enriched uranyl nitrate—which after processing can be used as fuel. The DOE has spent years planning for the transfer of the waste from Canada’s Chalk River Laboratories in Ontario to the Savannah River Site, a reprocessing facility in South Carolina. It will be transported in at least 100 to 150 separate truck shipments over a period of about three years, encased in cannisters normally used to transport solids that have been retrofitted to handle liquids. For security reasons, DOE won’t reveal the exact timing or routes of the shipments. But elected officials in states it is likely to pass through are concerned about safety.

Until earlier this month, the transfer was held up by a lawsuit from environmental and nuclear safety groups, including the Sierra Club and Beyond Nuclear. The groups demanded an environmental impact statement, a step typically required in such cases, but a DC district court judge ruled that the plan had received sufficient DOE review and so an EIS was unnecessary. The shipments are now expected to begin this spring.

A spokesman for the Savannah River Site says the DOE will receive $60 million to cover the cost of moving and processing the material, although that figure may have changed. The deal was initiated in 2008 by Atomic Energy of Canada Limited, which oversees that country’s nuclear waste, because Chalk River doesn’t have the means to convert the liquid waste into a solid. The United States originally gave the highly enriched uranium, then in solid form, to the Canadian facility for research and to produce medical isotopes. “Repatriation will reduce proliferation risks by consolidating highly enriched uranium inventories in fewer locations around the world,” an AECL spokeswoman said in an email.

Solid nuclear waste is already transported on US roads, as are nuclear weapons, raising concerns about security. But the fact that this material is in liquid form is what makes these shipments particularly worrisome. Despite assurances from the DOE that the liquid is no more dangerous to ship than solid waste, the scientists behind the lawsuit beg to differ. If solid waste material “fell into a reservoir of drinking water or a river, lake, or stream, it could perhaps be retrieved with a minimum degree of contamination,” Gordon Edwards, co-founder of the Canadian Coalition for Nuclear Responsibility, noted in a legal brief. “The situation is very different when the radioactive material is in liquid form. It would be essentially irretrievable.”

“People have to really worry…Knowing that accidents do happen, we have to be careful.”

Edwards, a mathematician, told me he thinks a leak is unlikely, but the consequences could be dire. By his analysis, less than two ounces of the radioactive uranium liquid could destroy a city’s water supply—he used the Georgetown reservoir for his calculations. And since potential shipment routes go over bridges and come close to critical waterways, he and the others are Edwards are pushing for every precaution. “People have to really worry,” he said. “Knowing that accidents do happen, we have to be careful.”

A bill introduced in the House by Martha McSally (R-Ariz.) would require a risk analysis by the Department of Homeland Security prior to the transfer of any nuclear materials. New York Democratic Rep. Brian Higgins helped craft the bill. He’s worried about nuclear materials crossing the Peace Bridge, a likely entry point into the United States, crossing the Niagara River into Buffalo, New York, from Fort Erie, Ontario.

After clearing the House earlier this month, the bill is now with the Senate Committee on Homeland Security and Government Affairs. “While the Department of Energy may not believe a full environmental review is mandated, it is certainly the right thing to do,” Higgins wrote in a statement. “Hazardous materials, never-before-transported, are scheduled to move through our backyard and the communities impacted have every right to demand a full and adequate assessment before that happens.”