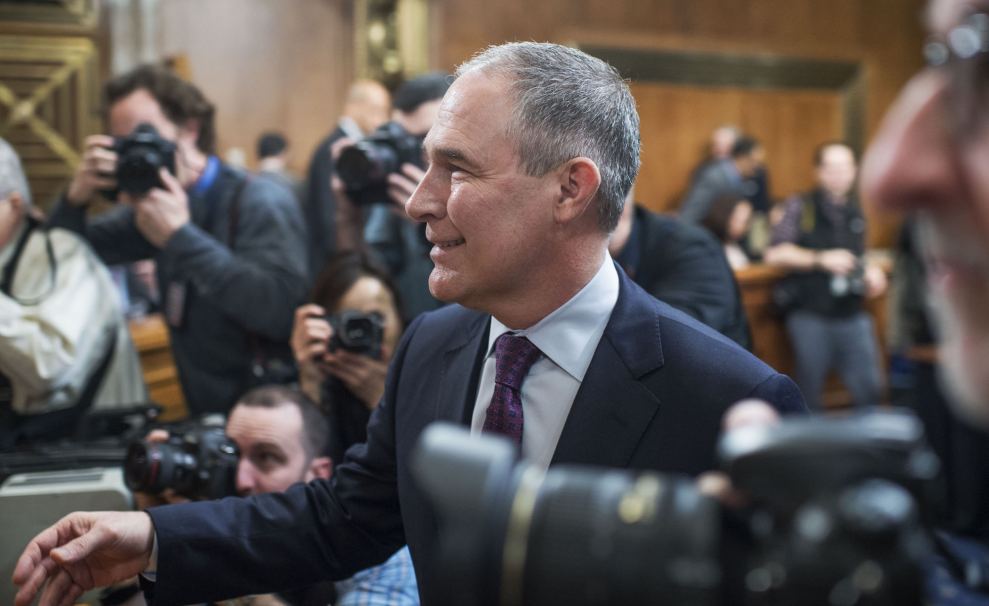 Scott Pruitt was confirmed Friday as the nation’s 14th administrator of the Environmental Protection Agency, despite the fact that a trove of emails between Pruitt’s office and fossil fuel interests have still not been made public. Democrats and environmental activists have strongly criticized Pruitt’s record as attorney general of Oklahoma—a record that included a number of lawsuits aimed at blocking Obama-era EPA regulations concerning pollution and climate change.

Pruitt will be sworn in before the public can review his emails from his tenure as attorney general.

Pruitt was approved 52-46 on a largely party-line vote. Two Democrats, Joe Manchin (W.Va.) and Heidi Heitkamp (N.D.), voted to confirm Pruitt. Both represent deep-red states that are heavily dependent on fossil fuel extraction, and both are facing tough reelection battles in 2018. Sen. Susan Collins of Maine was the only Republican to vote against Pruitt.

That means Pruitt will be sworn in before the Center for Media and Democracy and the American Civil Liberties Union of Oklahoma get their hands on his emails from his tenure as attorney general. The groups initially requested the release of email communications between Pruitt’s office and fossil fuel interests more than two years ago, but Pruitt staffers didn’t fulfill the request. Last week, following a lawsuit and a number of requests for additional emails, Pruitt’s office released 411 of the more than 3,000 relevant emails.

On Thursday, an Oklahoma judge ruled in CMD and the ACLU’s favor, ordering Pruitt’s office to turn over the rest of the 2,500 emails—by next Tuesday. But with Pruitt’s vote scheduled for today, that ruling provided little help for Democrats and green groups who hoped to use the information as part of the confirmation battle.

While it’s unlikely there are any smoking guns in the emails that would have been enough to change Republicans’ minds on Pruitt, Democratic senators called for another 248 hours of debate, which would have in effect delayed the confirmation vote until February 27, after the deadline for making the emails public. The Democrats’ motion failed by a majority vote that fell strictly along party lines. In a twist, both Heitkamp and Manchin voted in favor of extending debate, though they ultimately ended up supporting Pruitt’s confirmation. Collins, meanwhile, voted against extending the debate and then proceeded to vote against confirmation.

Manchin will vote to extend debate. Said he wants to see what’s in Pruitt emails.

At a press conference Friday, Senate Majority Leader Mitch McConnell (R-Ky.) was asked why he didn’t postpone the vote until after Pruitt’s emails became available. “Because I choose not to,” he responded.

Once Pruitt is sworn in, the administration’s efforts to shrink the EPA’s staff, cripple its work on climate change, and undo Obama-era regulations will begin in earnest. With Pruitt at his side, President Donald Trump is expected to sign between two and five executive orders targeting the EPA next week.