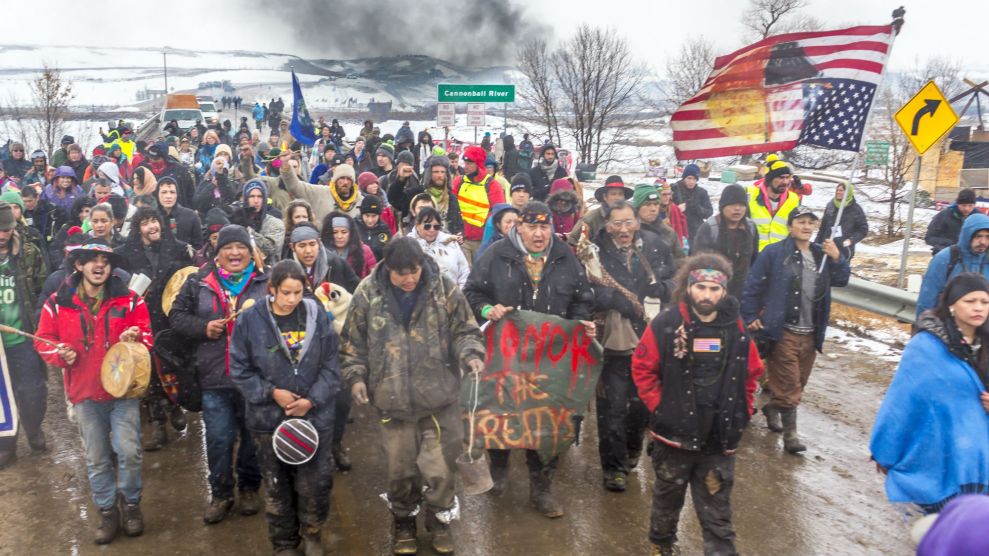 NoDAPL water protectors faced-off with law enforcement agencies on the day the camp was slated to be raided on February 22, 2017.Michael Nigro/ZUMA

As of this week, Bakken oil is expected to flow through the Dakota Access Pipeline under Lake Oahe near the Standing Rock Sioux Reservation. This development comes as court proceedings continue over the high-profile battle over the pipeline that drew thousands of protestors to North Dakota last year. As law enforcement officers and Indigenous activists faced off near the construction site, the conflict played out in real time on social media, capturing international attention.

A District of Columbia court has yet to rule on the Standing Rock Sioux and Cheyenne River Sioux tribes’ claims that the Army Corps of Engineers violated environmental, historic-preservation and religious-freedom laws in its approval of the pipeline. A ruling is likely still several weeks away. The tribes have tried for temporary restraining orders to stop the flow of oil until the case is decided, but judges have rejected those as well. Dakota Access, LLC, is required to update the court weekly on whether the pipeline operations have begun; on March 20, the company said they expected oil to flow this week.

On March 20, the Dakota Access, LLC said they expected oil to flow this week.

The fact that the pipeline’s backers, Energy Transfer Partners, appears to be prevailing is not surprising. Although the Obama administration had put DAPL on hold in December and called for further environmental review, then-President-elect Donald Trump vowed to push the project through once he took office. But national attention the protests brought to the flaws of the current consultation process—the federal government’s responsibilities to consult with tribes before approving major infrastructure projects that affect tribal lands—may still bear fruit on future disputes. And recent legal proceedings remind us how difficult it is for tribes to argue for religious freedom in court.

Following Trump’s late-January executive order to allow the pipeline to be finished, the Cheyenne River Sioux, located just south of the Standing Rock Reservation, filed a motion for a restraining order against the pipeline. Unlike the Standing Rock Sioux complaint based more around environmental and historic preservation violations, Cheyenne River’s argument claims the government violated the Religious Freedom Reformation Act (RFRA). “The Lakota people believe that the mere existence of a crude oil pipeline under the waters of Lake Oahe will desecrate those waters and render them unsuitable for use in their religious sacraments,” court documents say.

RFRA has an unreliable track record for tribes in court. Congress created the law in 1993 in part as a response to two cases in which courts sided with the government. In 1988 Lyng vs. Northwest Indian Cemetery Protective Association allowed the Forest Service to construct a logging road in California that would have disrupted an area sacred to several tribes. In 1990 Employment Division vs. Smith allowed two Native Americans in Oregon to be fired for failing a drug test because they had used peyote as an element of religious ceremony. But experts say RFRA’s original intention, to protect tribes from similar infringements, isn’t really bearing out in court. The most recent major failure was the case of the Snowbowl ski resort in Arizona in which reclaimed wastewater was being used to make snow on mountains sacred to several tribes. The tribes argued a violation of RFRA and ultimately lost.

RFRA has an unreliable track record for tribes in court.

RFRA has, however, worked for corporations such as Hobby Lobby. In 2014, the Supreme Court ruled family-owned corporations should not be required to cover employees’ contraception because doing so may infringe on a company’s religious beliefs. Part of the challenge for tribes, says University of Colorado law professor Charles Wilkinson, is one of translation. “Most Americans are not used to the nature of tribal religions, of having ceremonies on particular land areas as being significant to their religion,” Wilkinson says. Court documents show Cheyenne River’s attorneys explaining how the tribe views the pipeline:

“Although there can be no way of knowing when this prophesy emerged into the Lakota worldview, Lakota religious adherents now in their 50s and 60s were warned of the Black Snake by their elders as children. The Black Snake prophecy is a source of terror and existential threat in the Lakota worldview…. Lakota adherents believe that the Black Snake poses an existential threat because it will cause critical imbalance in an essential resource of the Cheyenne River Sioux Tribe: the natural, ritually pure waters of Lake Oahe.”

“You can kind of get that sense, there’s some question raised in opposing parties arguments of ‘Do they really believe this,'” says Monte Mills, a University of Montana law professor. In court in February, Judge James Boasberg reportedly questioned how a pipeline would desecrate the Missouri River if the oil itself never touched the water.

Obama administration Interior Solicitor Hilary Tompkins notes that a draft Environmental Assessment for DAPL “failed to even identify the reservation on its maps.”

The most lasting impact of the Dakota Access battle might be greater federal attention to the process through which the U.S. government is supposed to consult tribal governments about proposed infrastructure projects that might impact those nations, says Wilkinson. “(Tribes) see consultation as almost a four-letter word,” Wilkinson says. “It’s so often just checking a box.” A 38-page memo from former Obama administration Interior Solicitor Hilary Tompkins in December described in detail the ways in which the government failed to consult tribes that may be affected by the pipeline. At one point, Tompkins notes that a draft Environmental Assessment for DAPL “failed to even identify the reservation on its maps and incorrectly said the Standing Rock Sioux Tribe had no issue with the project.” (The Trump administration suspended the memo and removed it from the Interior website in February.)

Similarly, a 73-page report released in January by the Corps of Engineers, the Department of Justice and the Department of Interior about consultation—not limited to DAPL—highlighted flaws in the process, after seeking comment from 59 tribes across the country. The report includes problems with the way the federal government “tends to look at (infrastructure) projects in a segmented way…For example, in the Dakota Access Pipeline review, four different states, three separate districts of the Army Corps of Engineers, and the Fish and Wildlife Service each looked at different parts of the project, but did not coordinate the impacts to Tribes.” That report requested further action from several federal agencies by April 2017, in establishing better consultation processes.

“Many federal statutes require consultations with states, counties and tribes,” Wilkinson says. “Maybe one way or another Standing Rock could be valuable as raising that issue.”