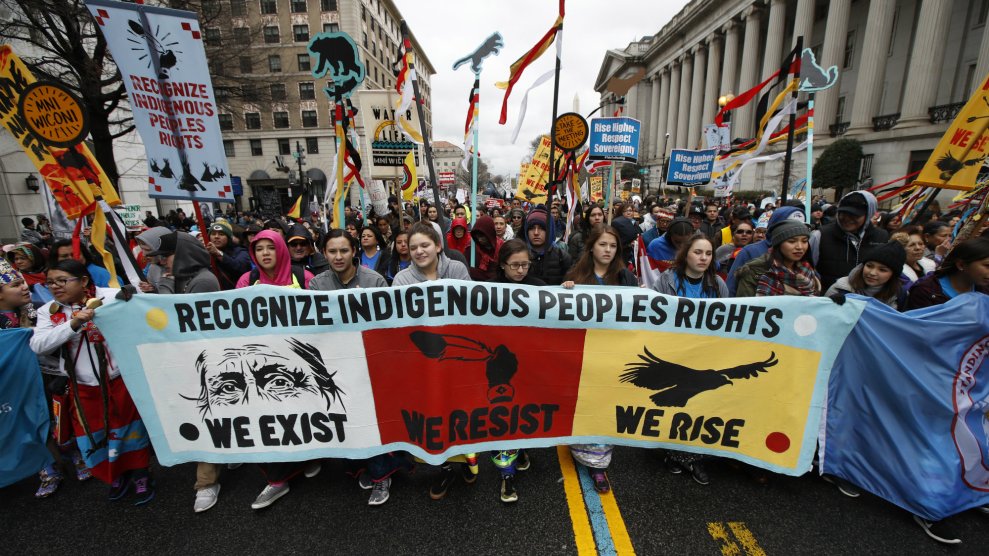 On Friday morning, thousands of indigenous nations and environmental activists descended on Washington, D.C. for what they called the Native Nations Rise march and rally. The 1.5 mile march from the US Army Corps of Engineers headquarters to the White House was the culmination of a week-long event that included cultural workshops and panels. Protesters wore traditional garb and danced, while speakers in the adjacent park rallied the audience by leading marchers in “We stand with Standing Rock” chants.

Their primary cause? Fighting against the construction of the Dakota Access Pipeline, a controversial 1,172 mile-long pipeline that will eventually carry crude oil through North Dakota to Southern Illinois. The route will cross through Standing Rock Sioux tribe’s land multiple times, threatening their water source and despoiling sacred land. Indigenous activists and their allies began fighting the pipeline in 2015, but their most serious set back took place immediately after the inauguration when President Trump signed executive orders to advance approval of the pipeline. This week, a federal judge signed an order refusing to halt the construction.

Megan, who is 19-years-old and Navajo, traveled to Washington, D.C. from Arizona to help spread the word about the concerns of indigenous peoples. “I came out here because all across the US different tribes face the same issues,” she told Mother Jones. “It’s good that different tribes can come together and unite and use our voices.” Anna, who is 18 from the Tohono O’odham tribe, had similar feelings. “My school is predominantly Mormon,” she said, and many of her classmates didn’t understand what transpired during the protests in North Dakota—only the high-profile arrests made at Standing Rock before the camp was shut down publicized the issue.

The crowd of approximately 2,000 at Native Nations Rise was diverse and in high spirits despite the blustering wind and intermittent rain. Rachel, 19-years-old, drove to the rally from Columbus, Ohio. “Fast-tracking the pipeline was the final nail in the coffin for me,” she says. Cody, who is 21 and drove east with Rachel, is still a Bernie Sanders supporter because “he was the only one who came out,” in solidarity with the Standing Rock Sioux tribe.

A reminder that the original pipeline route was through Bismarck, ND #NativeNationsRise #NoDAPL pic.twitter.com/6P5iuGv4Ux

“This is their water supply we’re talking about,” she says passionately. “The Native Americans are the original Americans, we took over their land, we have been so unfair…and that’s an understatement.”

Signs declaring, “Water is Life” and “People Over Pipelines” peppered the crowd. It is unclear what will happen next and if the tribes have any more legal avenues to stop the construction of the Dakota Access Pipeline. As indigenous people sang tribal songs and chanted in their languages in front of the Trump White House, one visual message was clear: In the middle of the park where demonstrators gathered was a large, red, “Make America Great Again” hat—with an arrow through the middle.