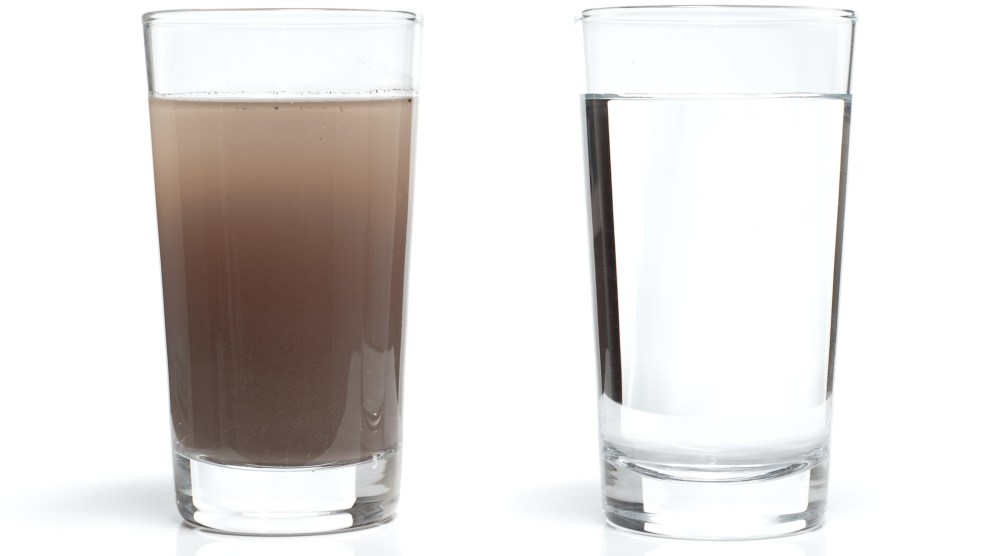 On a weekend morning in the summer of 2014, the 400,000 residents of Toledo, Ohio, woke up to a stark warning: Don’t drink the tap water, and don’t wash dishes or bathe kids in it. The problem: An enormous algae bloom had floated over the city’s municipal water intake in Lake Erie, fouling the city’s water with a toxin that “causes cells to shrink, which causes blood to spill into the liver and can quickly lead to death,” according to the Environmental Protection Agency.

Lake Erie’s algae bloom was hardly a natural phenomenon—it was driven by the millions of acres of farmland that drain fertilizer-laced runoff into the lake, which in turn feed the annual poison-spewing blooms, which in turn force Toledo and other cities clustered around Lake Erie to spend millions of dollars per year in filtration efforts—which, as happened in 2014, sometimes fail.

On the chopping block: a lab that helps city water officials figure out when a toxic bloom is headed to the parts of Lake Erie where they draw water.

Toxic algae blooms are a nationwide problem. In August 2016, no fewer than 19 states had to issue public health advisories because of them, according to the EPA. Annually, the damage they cause—everything from increased filtration costs to declines in fish populations—costs the US economy about $2 billion. Lake Erie, which provides water to 11 million people, is a particularly stark example of their ravages.

Marine scientist Jeff Reutter was at the center of a fierce effort by local, state, and federal officials to stem the 2014 crisis, which ended after three days without any illnesses. And now Reutter, then the director of Ohio Sea Grant, part of a network of programs in coastal and Great Lakes states, run by the National Oceanic and Atmospheric Administration (NOAA), is worried that the constellation of federal projects that protect people in places like Toledo from toxic algae blooms will be dismantled by coming federal budget cuts signaled by President Donald Trump—even as annual agriculture-driven algal blooms continue to threaten the cities clustered around Lake Erie.

Here are some crucial programs in this effort now languishing under threat of Trump’s budget ax:

• NOAA’s National Sea Grant College Program. Launched in 1966 to serve as an aquatic version of the land grant initiative founded by Abraham Lincoln about a century before, the Sea Grant program funds university centers in every coastal and Great Lakes state, designed to use publicly funded research and communication efforts to maintain vibrant coastal ecosystems. According to a US Office of Management and Budget memo obtained by the Washington Post, Trump’s budget proposal would eliminate the Sea Grant completely, for a total savings of $73 million annually.

While Sea Grant’s funding level amounts to “decimal dust” compared with the multitrillion-dollar federal budget, Reutter says, the impact on the Lake Erie region will be serious. Ohio’s Sea Grant program, housed at Ohio State, runs an island-based lab in the middle of Erie, where it took up the task of monitoring water quality after EPA funding for the task dried up in the 1990s. (Grist has more on what the Sea Grant program does nationally.) The lab’s monitoring helps water officials in cities ranging from Toledo to Cleveland—a population of more than 3 million people—figure out when a toxic bloom is headed to the parts of Lake Erie where they draw water.

If Trump and the Congress decide to make these cuts, it will “greatly reduce our ability” to prevent Toledo’s 2014 disaster from happening again, one scientist says.

In addition, Ohio Sea Grant also works with another arm of NOAA, the National Environmental Satellite, Data and Information Service, to go out to coordinates pinpointed by satellite images to test water for algae levels and toxicity, so that accurate algae bloom maps can be constricted for city water officials as well as researchers. Which brings us to…

• NOAA’s satellite program. Of course, the very satellite images required for such efforts are under threat, Reutter says. According to the Washington Post, NOAA’s satellite program “would be hardest hit” by Trump’s proposed cuts to the agency—it would see its budget slashed by $513 million annually, more than a fifth of its funding. In partnership with NOAA’s satellite program, Ohio Sea Grant predicts the size and location of the blooms before the peak, giving cities time to plan filtration efforts. In 2015, for example, Toledo was able to avoid a repeat of the 2014 crisis despite a near-record bloom that year, largely because of early warning.

• The EPA’s Great Lakes Restoration Initiative. Getting at the root of the problem—fertilizer pollution from farms—is maddeningly complex, Reutter says, because five states and one Canadian province all have farmland that drain into Erie. The EPA’s Great Lakes Restoration Initiative is critical because it brings the players from all these jurisdictions together, Reutter says. According to documents obtained by OregonLive revealing plans to slash the EPA’s budget, the administration plans to cut the program’s funding by 97 percent, from $300 million to $10 million. In addition to helping coordinate a response to the crisis among the states, the Great Lakes Restoration Initiative also funds specific projects, like one in 2015 to “retire 270 acres of cropland, restore six miles of streams, stabilize 1,000 feet of eroding stream banks and restore 70 acres of wetlands at eight locations in the Maumee River watershed to prevent phosphorus from entering Lake Erie,” according to the EPA.

Taken together, if Trump and Congress decide to make these cuts, it will “greatly reduce our ability” to prevent Toledo’s 2014 disaster from happening again, Reutter says—hindering efforts to filter toxins at the municipal level when big algae blooms occur, and also long-term efforts to prevent them.