On New Year’s Day in 1970, President Richard Nixon appeared in San Clemente, California, for the momentous signing of the National Environmental Policy Act—the congressional statute that formally recast the government’s role from conserving the wilderness to protecting the health of the environment and the general public. In the previous decade, rising unrest over the link between pollution and poor health—spurred forward by Rachel Carson’s groundbreaking 1962 exposé Silent Spring and Lady Bird Johnson’s beautification campaign—gave birth to a burgeoning environmental movement demanding strong and urgent action from the federal government. Nixon, who was largely indifferent to environmental issues but sensitive about his own popularity, succumbed to the public pressure.

There was no evidence of any indifference in San Clemente that day when he laid out his new vision for the decade: “The 1970s absolutely must be the years when America pays its debt to the past by reclaiming the purity of its air, its waters, and our living environment,” he said. “It is literally now or never.” 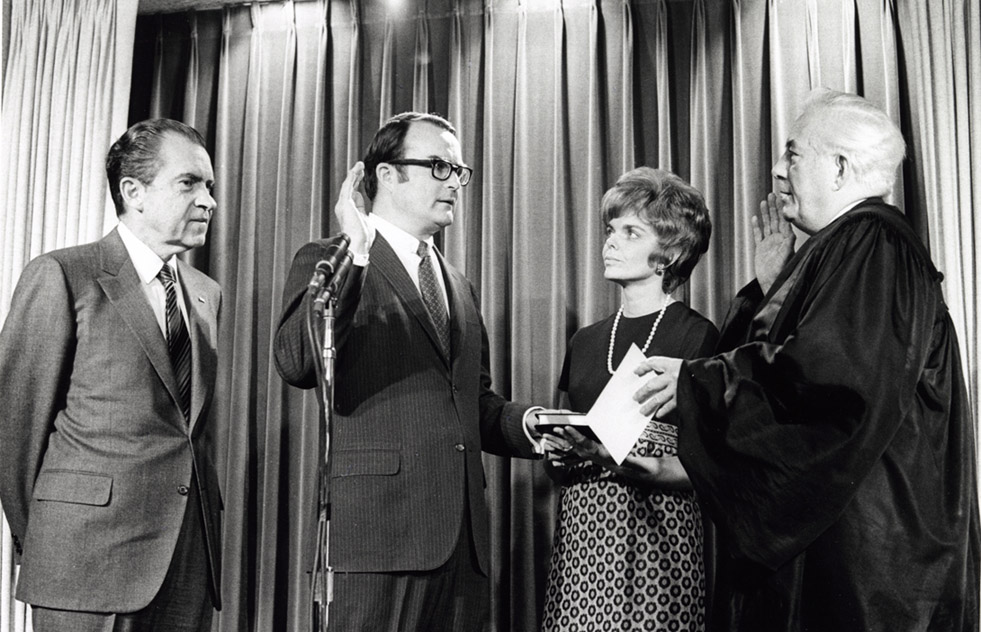 In the following months, the president moved quickly to fulfill his promise. In February, he rolled out an unprecedented 37-point plan on the environment; by April, he approved suggestions from the Advisory Council on Executive Organization to form an independent agency dedicated to enforcing environmental regulation. Whereas such enforcement responsibilities had previously been scattered across 15 other federal organizations—water pollution under the Department of Interior, air pollution and solid waste under the Department of Health, Education and Welfare, and pesticides under the Department of Agriculture, to name a few—the Environmental Protection Agency would consolidate the authority over specific areas under one umbrella. After a summer of congressional hearings, the EPA became a government agency with its own member of the Cabinet. Part of its initial budget came from the other 15 agencies; a formal separate budget wasn’t established until January of the following year. Nixon appointed William D. Ruckelshaus, a 38-year-old moderate Republican and assistant attorney general plucked from the Department of Justice, to head the agency, which opened its doors on December 2.

As the Trump administration concludes its first 100 days in office against a backdrop of aggressive efforts to dismantle the EPA, it may seem difficult to imagine a golden era of environmental legislation, ushered in by a conservative Republican president with strong bipartisan and public support. Yet 47 years ago, within the first 100 days of the EPA, Ruckelshaus successfully established a sweeping anti-pollution vision and laid the groundwork for a sophisticated and effective regulatory framework. Looking back on the EPA’s origins and early successes is a reminder of how much the agency was able to achieve with an engaged and supportive administration, Congress, and public.

“What defined EPA in its earliest days was less the need to define a regulatory agenda than a need to convey a sense of mission and purpose to the public, the states, and the regulated community,” Ruckelshaus recalled in a March 1988 EPA Journal article.

The 5,800-employee fledgling agency posed challenges in both internal cohesion and public credibility. To address the former, Ruckelshaus delegated the internal organization of the staff to his deputy and focused on clarifying exactly what the agency’s mission would be. After consulting his own staff and looking at two other agencies—NASA, which had a very narrowly defined goal (“let’s get to the moon in ten years”), and the Office of Equal Opportunity, which had a broad and amorphous goal (“let’s do something about poverty”)—he decided the EPA would be focused on pollution abatement, which was, in his words, “identifiable enough, understandable enough to let us know what we were doing.” 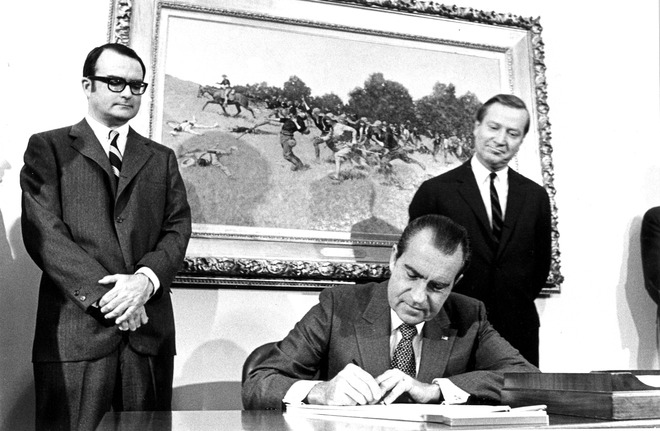 Having defined a sense of mission, Ruckelshaus then set about communicating it to the American people and other stakeholders. What he saw as the EPA’s “most important imperative” was to demonstrate its willingness “to respond to the legitimate demands of the people.” The public was predisposed to be distrustful of government-driven environmental regulation. Prior to the EPA, conflicts of interest riddled the regulatory process. The Department of Agriculture, for example, had been in charge of regulating pesticide use while also being required to promote agricultural production. Days after the EPA’s founding, a New York Times investigation revealed that the majority of the state air and water pollution control boards were staffed by industry representatives engaged in pollution activities.

“The 1970s absolutely must be the years when America pays its debt to the past by reclaiming the purity of its air, its waters, and our living environment.”

In response to this atmosphere of mistrust, Ruckelshaus did not shy away from enforcement. A week after his confirmation, he filed suit against Atlanta, Detroit, and Cleveland for polluting their rivers in violation of water quality standards. (Similar suits against major industry players, including Armco Steel Company and Jones and Laughlin Steel Company, soon followed.) Less than a week after that, he established 10 regional EPA offices across the US to engage more deeply in local environmental issues. “Those actions established EPA foresquare in front of the American people as an Agency committed to doing its job,” wrote Ruckelshaus in the EPA Journal.

The EPA also engaged in an aggressive regulatory agenda, according to a comprehensive review of the Federal Registers (the government’s official daily publication for rules, proposed rules, notices, and presidential documents) during its first 100 days. With a budget of $2.5 billion at the start of 1971, the agency was tasked with researching, standard-setting, monitoring and enforcing five environmental hazards: air and water pollution, solid waste disposal, radiation, and pesticides.

Leading up to its 100th day, the focus was primarily on administering and enforcing the Clean Air Act of 1970, which was enacted on December 31 to strengthen government crackdown of air pollution from industry and motor vehicles. To do so, the agency began systematically delineating air quality control regions in each state in consultation with local authorities. They also set thresholds for six air pollutants, including sulfur oxides, particulate matter, and carbon monoxide, based on available scientific and medical data, and used them to develop fuel additive and emissions standards. Detailed diagrams and formulas accompanied each rule to demonstrate the methods for measuring ambient pollutant concentrations.

Aside from air quality regulation, the agency also set new standards for pesticides and food additives, initiated the process to ban DDT, and began rudimentary regulation of water pollution. Though the Clean Water Act wasn’t enacted until 1972, in 1970 the staff creatively repurposed the 1899 Refuse Act. The act was originally passed to prevent the industry from dumping debris into navigable waters but was revived to implement a permit program for restricting all forms of industrial water pollution.

“Public opinion remains absolutely essential for anything to be done on behalf of the environment. Absent that, nothing will happen.”

Finally, the EPA engaged in an intensive public education campaign to build awareness of and rally support for the agency. Ruckelshaus traveled to each regional office in his second two months in office to listen to the concerns of local policymakers and constituents and to talk with the press. He understood what constituted his agency’s lifeblood: The EPA “never would have been established had it not been for public demand,” he reflected in a 1993 oral history interview for the EPA’s archives. “Public opinion remains absolutely essential for anything to be done on behalf of the environment. Absent that, nothing will happen.”

The legacy of Ruckelshaus’ first 100 days laid the foundation for the agency’s growth and the subsequent passage of pivotal environmental legislation over the following years. During his tenure, he saw the enactment of the Clean Water Act and the Great Lakes Water Quality Agreement, as well as the reauthorization of the Federal Insecticide, Fungicide, and Rodenticide Act. Following his departure in 1973, the momentum continued with the passage of the Safe Drinking Water Act in 1974, the Toxic Substances Control Act in 1976, and the Resource Conservation and Recovery Act in 1976, among others.

A decade after stepping down, Ruckelshaus was asked by President Ronald Reagan to return. The first 28 months of the Reagan administration had proved disastrous for the EPA. Under Administrator Anne Gorsuch, the mother of recently confirmed Supreme Court Justice Neil Gorsuch, the agency suffered deep budget and staff cuts, scandals, investigations, and even a key official’s imprisonment—all of which triggered increasing public outrage. Ruckelshaus took over and revived the flagging organization.

While the specifics clearly differ, the antipathy of the Trump administration to the EPA uncannily mirrors the attitudes that nearly brought the agency to its knees during Reagan administration. “The E.P.A.’s new administrator, Scott Pruitt, comes to his job with this historical backdrop,” Ruckelshaus wrote in a New York Times op-ed this March, after describing the agency’s disarray at the start of his second term.

“The public will tolerate changes that allow the agency to meet its mandated goals more efficiently and effectively. They will not tolerate changes that threaten their health or the precious environment,” he cautioned. “These are the lessons President Reagan learned in 1983. We would all do well to heed them.”