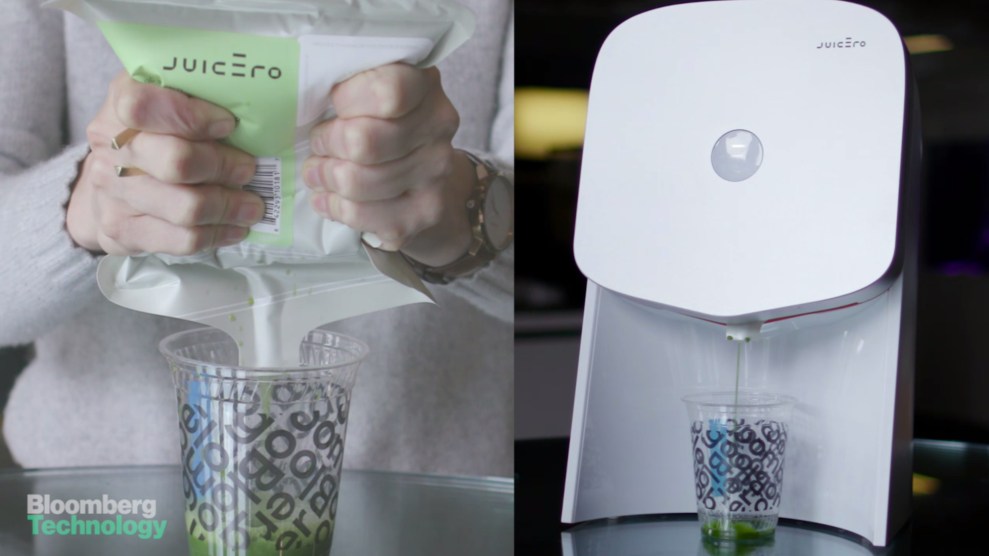 Engorged with $120 million in cash from top-shelf Silicon Valley venture-capital firms and declared the “coolest invention of 2016” by Goop, Juicero debuted last year, peddling pricey subscription bags of pre-chopped produce and a $700 contraption to crush them into juice.

What a difference a year makes. The company has slashed the price of its contraption to $400. Juicero founder Doug Evans—who once vowed to do for juicing what Steve Jobs did for personal computing—has been replaced as CEO by a former Coca-Cola exec. And that fancy juicer? Turns out to be a bit extraneous. Bloomberg reporters Ellen Huet and Olivia Zaleski found that just squeezing the Juicero bag with one’s bare hands works nearly as well as popping it into the proprietary contraption—and is actually faster. (Their video is a must-watch):

In Bloomberg’s squeeze tests, hands did the job quicker, but the device was slightly more thorough. Reporters were able to wring 7.5 ounces of juice in a minute and a half. The machine yielded 8 ounces in about two minutes.

Now, unlike human hands, Juicero’s juice machine connects to the internet and “reads a QR code printed on the back of each produce pack and checks the source against an online database to ensure the contents haven’t expired or been recalled,” the reporters note. But “the expiration date is also printed on the pack.” So…

On Thursday, that former Coke CEO, Juicero honcho Jeff Dunn, leapt to the defense of the company and its gadget in a Medium post. He announced that the “value of Juicero is more than a glass of cold-pressed juice. Much more.” Indeed, he revealed, it’s the vehicle that has “let me connect my work to my personal mission and passion: solving some of our nation’s nutrition and obesity challenges.” Apparently, overcoming those challenges requires everyone to shell out $400 for a machine that saves the trouble of squeezing a bag for 90 seconds.

Last year, I cast a skeptical eye on Juicero and cheekily suggested the unlikely scenario that it would emerge as the Uber of $7-per-pop home juices. The Bloomberg reporters write that investors were thinking more along the lines of Nespresso and Dollar Shave Club: “businesses that combine the one-time sale of hardware that ends up leading to repeat purchases of consumable packages.”

But their story suggests a different direction. Doug Evans has apparently revolutionized juicing after all, by unwittingly inventing a highly effective way of doing it by hand, without the need for an elaborate mechanical device: probably more artisanal and less lucrative than what his Silicon Valley funders had in mind.