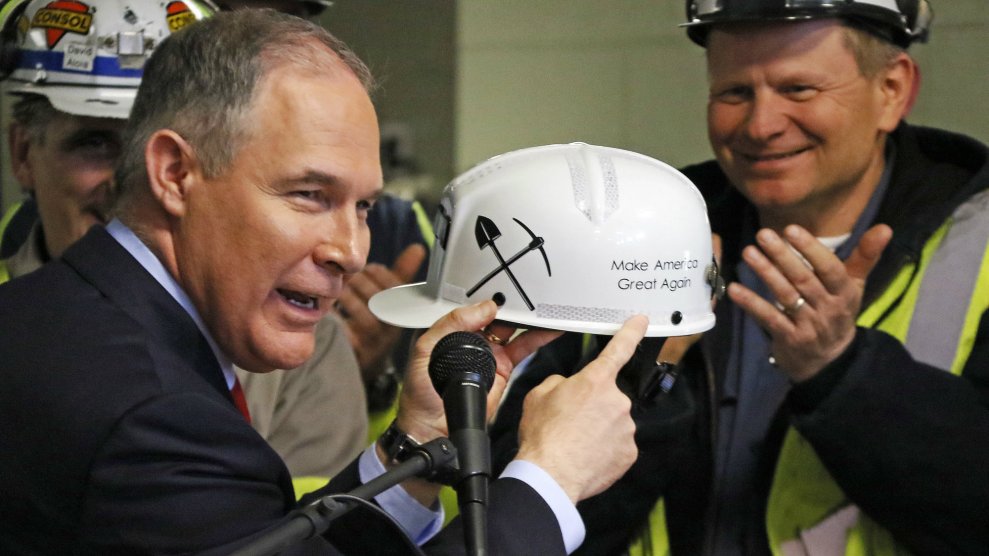 Update, April 20, 2017: Scott Pruitt’s trip to East Chicago drew ire from residents after he kept the visit short and spent no time talking to residents or taking questions, opting only to talk to local politicians. A Periscope video recorded by local reporter Michael Puente of WBEZ-Chicago also showed Pruitt speaking for less than two minutes at the press conference.

The NAACP’s Indiana Environmental Climate Justice group invited Pruitt to their meeting. They tweeted that he did not show up.

The Environmental Protection Agency’s administrator has found a slogan for his embattled agency’s new direction. Last week, Scott Pruitt announced a #Back2Basics campaign that proposes returning the EPA to its supposed roots: protecting the environment, spurring job growth, and not burdening industry with rules and regulations. Pruitt might see firsthand the problems with this vision on Wednesday when he visits East Chicago, Indiana, a mostly black and Latino city of 29,000 that is home to a Superfund site and a host of other environmental problems.

Local officials, including Indiana’s Republican governor, Eric Holcomb, urged Pruitt to visit the site and address the issues surrounding the cleanup process, which has been lagging for several years. The site is known as USS Lead, referring to the smelting facility that operated there between 1906 and 1985, turning refined copper and lead into batteries and other products and, in the process, contaminating the soil in the area with lead and arsenic. The site was added to the National Priorities list in 2009, which means it’s one of the most polluted sites in the country.

The EPA began conducting soil tests at the site in late 2009 and finally reached a consent decree with the liable companies in 2014. The White House has proposed a cut to funding for the Superfund program, but Pruitt told the U.S. Conference of Mayors in March that he believes it’s vital. But his #Back2Basics plans for the EPA, which includes rolling back regulations for companies, would lead to additional problems in East Chicago. Abigail Dillen of Earthjustice.org said the plan is simply getting rid of “the health and environmental protections we all rely on—protections only the government can provide.”

The plan is simply getting rid of “the health and environmental protections we all rely on—protections only the government can provide.”

The pollution from the Superfund site is not the only issue facing the city. In March, the residents of East Chicago signed a petition, urging the agency to address an urgent crisis of lead in the water supply. The EPA sent officials to the city to test the water of the homes near the Superfund site and found that not only were there high levels of lead in the tested homes, but that the contamination was likely city-wide problem; lead pipes and water that had been improperly treated for decades were the culprits. The EPA expressed concern about corrosion control chemicals in the city’s drinking water. During the water tests, the agency asked city officials which chemicals they were using for water treatment and sent emails to city officials with links to a report about why the chemical the city was using was insufficient to protect the water.

“There are a lot of issues,” says Anjali Waikar, an attorney at the Natural Resources Defense Council, “but we’re also hoping for clear affirmative action from the EPA with respect to the drinking water.”

Marc Edwards, one of the Virginia Tech scientists who researched the water system in Flint, Michigan, said the corrosion control chemical the city began using in 1992 was not effective for preventing lead leaching. He also said the chemical the city began using in 2015 could be worse than having no corrosion control at all. East Chicago Utilities Director Greg Crowley told the Times of Northwest Indiana that it would have been “helpful if [the EPA] had been more hands-on” in helping the city make the switch to different chemicals.

But federal oversight is not on the EPA’s new agenda. Pruitt criticized the Chesapeake Bay cleanup plan as “federal overreach” during his Senate confirmation hearing. In his many lawsuits filed against the EPA when he served as attorney general of Oklahoma, he alleged that the EPA “had acted in excess of the authority granted to it by Congress.”

One of the specific priorities in #Back2Basics is “clearing the backlog of new chemicals” waiting approval from the agency so companies can “innovate and create jobs.” After the White House solicited policy advice from industry leaders on which regulations were impeding their businesses and which should get the ax, nearly half of the 168 submitted comments targeted the EPA. A typical example is from a chemical manufacturing company in Newark, New Jersey, which claims it is being hamstrung by the EPA’s Superfund program. Forty-eight of those comments related to the Clean Air Act and 29 to the Clean Water Act. Before environmental laws, no legal avenue existed to stop companies from polluting the land and water.

Then there are concerns about administration plans to shrink the agency. According to Politico, budget director Mick Mulvaney wanted the EPA to identify two regional offices for closure on June 15. This week, the Chicago Sun-Times reported that one of those could be EPA Region 5, which has been plagued with problems, but is the office responsible for flagging improper water treatment in East Chicago.

“[Pruitt] wants to take the EPA out of the mix and put power back into state and city regulators’ hands,” says Waikar. “But East Chicago is a clear example of how that’s not working.”