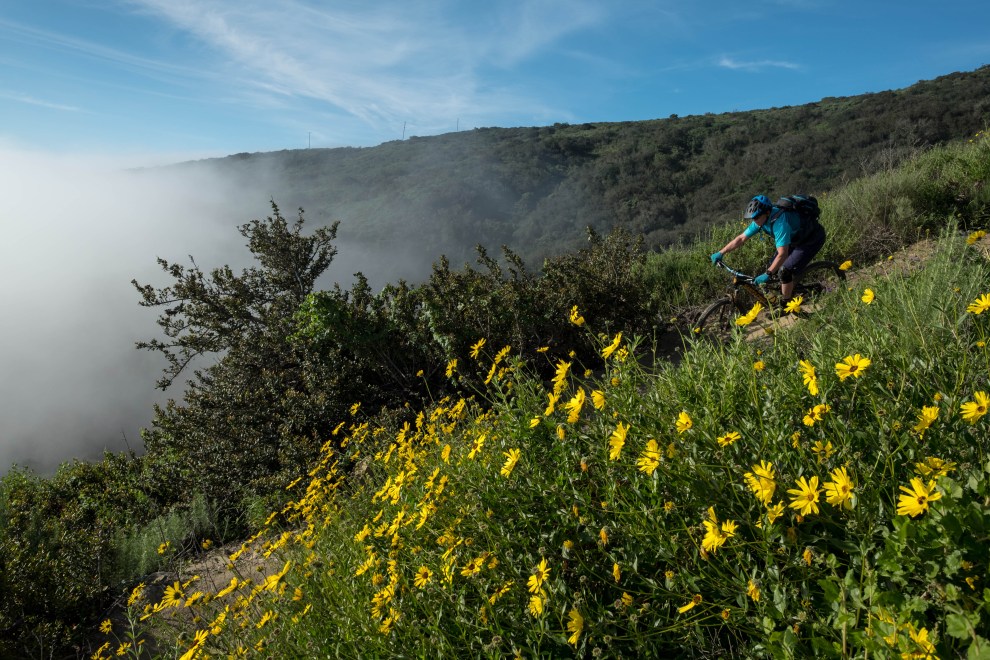 Fat flakes of snow tumbled from the sky and collected on Frank Gehrke’s shoulders as he stood high in the Sierra Nevada on March 30, measuring the winter’s frozen bounty. Gehrke, head snow surveyor at the California Department of Water Resources, plunged a hollow metal pole into the snow, then weighed its contents. His measurements showed that the snow was nearly 8 feet deep at Phillips Station, south of Lake Tahoe, and the amount of water held within it was 183 percent of the long-term average for this time of year. Overall, the Sierra snowpack was 164 percent of the historical average. That’s a stark contrast to the record low April 1 reading two years ago, when the statewide snowpack was just 5 percent of average. “This is an extremely good year from the snowpack standpoint,” Gehrke said in a statement. This year’s abundant snow, he added, is providing “great reservoir recovery.”

By the end of February, reservoirs in about 80 percent of California’s river basins were above historical average capacity.

Following a years-long drought—which California Gov. Jerry Brown declared over on April 7—this winter’s record-breaking wet weather has recharged surface water supplies across California: By the end of February, reservoirs in about 80 percent of the state’s river basins were above historical average capacity. Reservoir levels are also above average in most Western states, including Nevada and Wyoming, which each experienced their wettest winter on record. This year’s plentiful precipitation is pushing water-forecasting models to their limits as analysts predict summer water supply based on winter rain and snowfall amounts outside historical norms. While variable winter weather isn’t new in the West—wild swings in precipitation from year to year are a fact of life here, experts say—climate change may be intensifying those fluctuations. The lessons forecasters and reservoir managers are learning this year could help them deal with the uncertain future ahead.

Several states across the West received substantial snow this winter, says Jolyne Lea, a hydrologist with the National Water and Climate Center in Portland, Oregon. “From the Sierra through Utah and into Colorado, there was a swath of very heavy snow,” Lea says, while other areas experienced more typical precipitation. Montana’s statewide snowpack, for example, was 92 percent of the historical average by the beginning of April. The National Water and Climate Center, part of the Natural Resources Conservation Service, creates forecasts of spring and summer runoff using models that take into account historical data on snow, rain, stream flow and other factors. Municipalities, irrigation districts, reservoir managers, farmers, ranchers, fish and wildlife managers, recreational rafters and even bankers eyeing agricultural loans use the forecasts, Lea says.

Yet those predictions become more uncertain when the precipitation numbers they’re based on have little historical precedent. “When we see more extremes, it becomes very difficult to try and use the past to predict the future,” Lea says. “My concern is, how accurate can I be out in an area that the model might not be used to handling?” Continuously gathering new information and adding it to the model can help fix the problem. Tracking this year’s voluminous Sierra snowpack, for example, and the amount and timing of runoff it generates, will make it easier to predict runoff during future high snow years. “If we keep our models updated with current information, we can kind of stay on top of the changes we’re seeing,” Lea says.

The late March or early April California snowpack reading is crucial for the managers that allocate water to irrigation districts and customers downstream of Trinity Lake, the third largest reservoir in the state, says Donald Bader, manager of the Northern California Area Office of the Bureau of Reclamation, which manages about a dozen California reservoirs. That’s because Trinity—which was 92 percent full on April 9—gets about 80 percent of its water from snow, while rain provides the rest. California’s largest reservoir, Lake Shasta, is the opposite: Shasta receives only about 10 percent of its water from snow.

The amount of water flowing into Lake Shasta this year is on track to be the second highest in the reservoir’s history.

And while Mother Nature pelted the Sierra Nevada with snow this year, she didn’t forget about rain: the amount of water flowing into Shasta this year is on track to be the second highest in the reservoir’s history, Bader says. Several rainstorms in quick succession early in the season forced dam managers to unleash water releases matching the biggest on record for the reservoir, up to 79,000 cubic feet per second. Coming on the heels of the crumbling spillway at the Oroville Dam, where fears of a massive flood triggered an evacuation order affecting nearly 200,000 people, “there was a lot of high interest in what we were doing,” Bader says, including daily meetings with emergency personnel from nearby communities. Forecasting and early flood control releases are crucial tools to avoid even higher outflows and potentially disastrous downstream consequences, like collapsing levies on the Sacramento River, Bader says.

Colorado has also been experiencing a wet winter, says Erik Knight, a hydrologist with the Bureau of Reclamation in Grand Junction, Colorado. But for reservoir managers, the season’s most unusual feature so far is not the amount of snow, but the timing of when it began to melt. Following above average temperatures in March, high flows—similar to what one might expect to see in early May—arrived two months early, Knight says. Blue Mesa, for example, the largest reservoir in Colorado, was at 69 percent capacity by the end of March; that’s 126 percent of the historical average for that time of year. While lower elevations probably won’t see much more snow, winter isn’t necessarily over higher up, Knight says. “Do (high water levels in March) mean that runoff is coming in early and that it won’t be there later on in the year? Or is this additional water and we’re still going to be seeing a big runoff?” Knight asks. “We don’t really know yet.”

Though this year’s winter precipitation has set some records, rain and snow are inherently variable from year to year in the West, says Jay Lund, director of the Center for Watershed Sciences at the University of California Davis. When Gehrke tried to measure the snowpack at Phillips Station on April 1, 2015, for example, the area was completely bare. He posed for photographs with a snow-measuring pole in his hands, his feet firmly planted on last year’s faded grass. This winter, he wore snowshoes. The last few years have clearly revealed the need for dams, reservoirs, spillways and other water infrastructure that can cope with a wide range of snowfall and rain, Lund says—a need that will likely grow as climate change pushes extreme storms beyond the bounds of historical conditions. From drought to deluge, he says, recent years have been “a reminder of how variable the weather is in the West.”