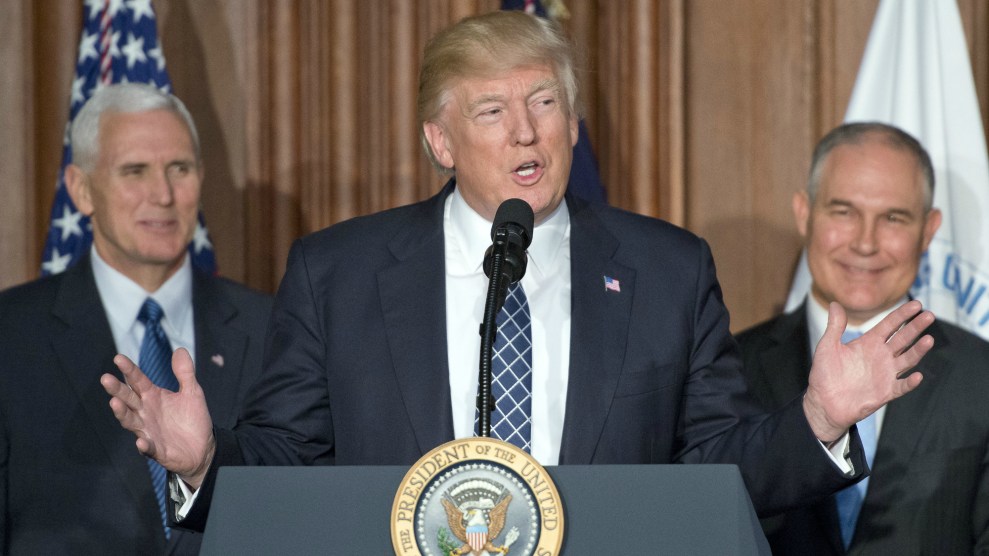 During the campaign, Donald Trump promised to “get rid of” the Environmental Protection Agency “in almost every form” and leave it in “little tidbits.” He’s begun to make good on that pledge during his first few months in office by putting climate change deniers in charge, bringing Obama-era regulations to a standstill and asking Congress to slash the agency’s budget by a third. But Trump’s attack on environmental policy hasn’t been limited to changing rules—he’s also undermined the workplace culture at the EPA. That lowered morale is evident in a report released this week filled with warnings from the people who know the EPA best—its longtime staffers.

The Environmental Data & Governance Initiative is a watchdog group that formed after the election to monitor and archive federal data that many feared might be at risk in the Trump administration. On Monday, a team of EDGI researchers published a report, titled “The EPA Under Siege,” based on interviews with 48 current and former staffers. Because these accounts are anonymous, there is no way of knowing how reliable the specific accusations are and what any given interviewee’s current status at the agency is. But the report offers a snapshot of the confusion and fear that have dominated agency life in the first half-year of Trump’s presidency.

The interviews excerpted in the 90-page report are filled with anxiety over the future of the agency and reveal a clear lack of trust between EPA boss Scott Pruitt’s appointed political staff and the career employees at the agency. Several staffers or ex-staffers warn that the Trump administration’s ultimate goal is to gut the agency—which is exactly what Trump said he wanted to do during the campaign, though he hasn’t repeated it recently.

As one person puts it in EDGI’s report: “I think the plan is to get rid of EPA, and I think that doesn’t even cross people’s minds. I think this is just phase one.”

These dire predictions are coming from seasoned veterans: Christopher Sellers, a Stony Brook University historian who is on the steering committee of EDGI, told me that the report focused on interviews with longtime staff and alumni in order to put the EPA’s current state into a historical context.

EDGI’s interviews (and my own reporting) suggest that Pruitt and Trump’s team set a hostile tone early on. Trump’s appointees left career staffers out of the loop and planned photo-ops in a way that would antagonize staff, inviting coal baron Robert Murray and other agency foes to attend Trump’s and Pruitt’s events.

Typically, when presidents or vice presidents visit EPA headquarters to give a speech, they’ve used the opportunity to highlight the work the EPA does, not to reprimand employees. Trump’s visit to sign an executive order in March was different. Few if any staffers were invited to attend the speech where Trump, surrounded by coal miners, declared the agency’s supposed war on coal to be over. “Nobody was invited to [Trump’s visit to EPA HQ] which was as in your face, insulting thing as I’ve experienced in my time here,” one person says in the report.

In another excerpt, a staffer describes the surreal atmosphere that’s turning regulators into yes-men: “I mean every day, every single day there’s one more surreal thing, and everybody is afraid. Everybody’s afraid so no one pushes back, nobody says anything. They kind of hem and haw [around Pruitt].”

One EPA employee noted that he or she’s seen more self-policing from colleagues, while others noted a new level of resistance to the agency’s leadership. “I have worked under six Administrations with political appointees leading EPA from both parties,” one says. “This is the first time I remember staff openly dismissing and mocking the environmental policies of an Administration and by extension [Pruitt].”

Morale is low right now, and EDGI suggests it may be at its lowest in agency history, including during the Reagan administration. But morale isn’t permanent damage; reorganization and layoffs would be the bigger problem for the future of the EPA. Reducing the EPA’s workforce by about 25 percent—as Trump has proposed—would mean fewer workers with expertise and historical knowledge of the agency’s workings. One interviewee notes: “To get those [staffing budget] numbers down, they’re probably going to have to try to get rid of a lot of the institutional knowledge too, the old-timers.” Meanwhile, Pruitt is moving ahead with a plan to buy out 1,200 employees at the agency this summer, with Trump’s budget proposal calling for an eventual workforce reduction of more than 3,000.

Those reductions will compound the problems created by six years of budget cuts and attacks from a Republican majority in Congress, which have already left the EPA with about 1,650 fewer staffers than in 2009. That’s left the career staff stretched thin with more work than ever, even as they face significant new tasks, such as implementing the toxic chemicals law Congress passed last year. Meanwhile, Pruitt has been making promises that could be impossible to keep if Trump manages to get most of his budget cuts: At a House budget hearing last week, he told concerned Republicans that despite the proposed funding cuts, he’d still fulfill the agency’s responsibilities for hazardous waste cleanup, Great Lakes restoration, and other work.

Over the course of its 47-year-history, EPA staff have faced off with other hostile presidents and survived. But from how the veterans tell it, Trump’s assault is unlike anything they’ve seen before.

“I think there’s a general consensus among the career people,” one person says, “that at bottom they’re basically trying to destroy the place.”