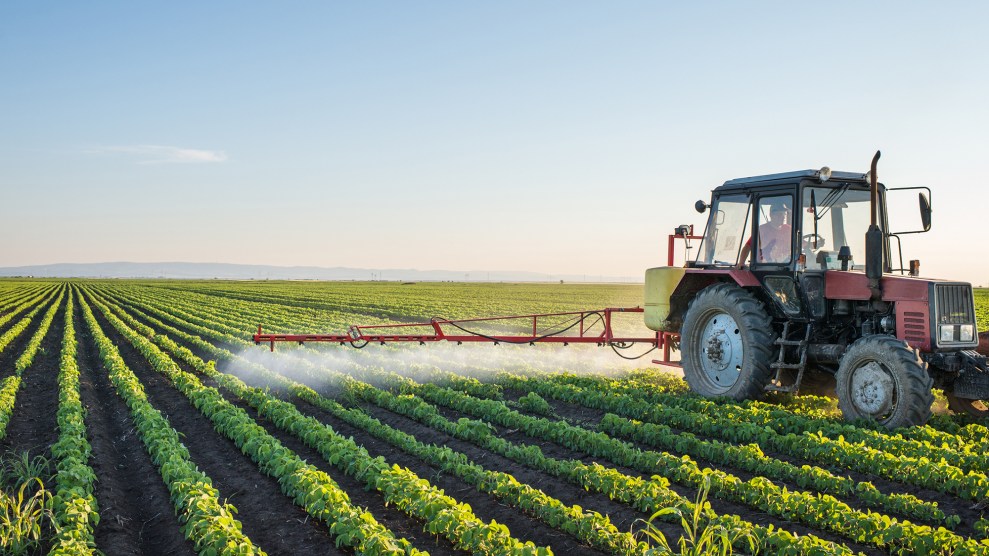 Does a common herbicide cause cancer? Over the past several years, that question has stirred up no shortage of controversy, with international health agencies offering conflicting information. The weedkiller, a chemical called glyphosate, is commonly sold by the agribiz giant Monsanto under the brand name RoundUp. Introduced in the mid-1970s, it’s now the world’s most widely used pesticide, with some 250 million pounds sprayed on US crops annually.

“This is a board of people whose job it is to assess evidence, so they should be able to do that before it’s published.”

RoundUp has long been considered a benign alternative to harsher weedkillers. After extensive reviews, most regulatory agencies—the US Environmental Protection Agency, the European Food Safety Authority, and those of many other nations—have come to the conclusion that it does not cause cancer. So when the International Agency for Research on Cancer (IARC), a division of the UN’s World Health Organization, declared RoundUp a probable carcinogen in 2015, there was an international outcry. Shortly after, 184 plaintiffs in California filed a legal case against Monsanto, saying that the company failed to warn them about the risks of its product. Since then, in a separate suit, hundreds more plaintiffs have claimed that RoundUp caused their cancers, citing the IARC’s findings as evidence.

About that evidence: According to a new Reuters investigation, Aaron Blair, the scientist who led the IARC’s review panel on glyphosate, had access to data from a large study that strongly suggested that Roundup did not cause cancer after all—but he withheld that data from the RoundUp review panel. Weirder still: Blair himself was a senior researcher on that study. From the Reuters report:

Previously unreported court documents reviewed by Reuters from an ongoing US legal case against Monsanto show that Blair knew the unpublished research found no evidence of a link between glyphosate and cancer. In a sworn deposition given in March this year in connection with the case, Blair also said the data would have altered IARC’s analysis. He said it would have made it less likely that glyphosate would meet the agency’s criteria for being classed as “probably carcinogenic.”

So why on Earth would a scientist fail to mention his own work—and blithely let a powerful agency come to a conclusion that his own data suggested was wrong? IARC told Reuters it’s because Blair’s data wasn’t published yet, and the agency has a policy against taking unpublished data into consideration. For his part, Blair told Reuters that the data wasn’t published in advance of the IARC’s decision because there was too much of it to fit in one paper. (Reuters asked two outside experts to weigh in, and neither could understand the decision not to publish the data.)

And how about the rule against taking unpublished data into consideration? I called Michael Eisen, a professor of genetics, genomics, and development at the University of California-Berkeley. Eisen is the founder of the Public Library of Science and an outspoken advocate of transparency in science. He told me that in this particular case, he found IARC’s rule “silly.”

“This is a board of people whose job it is to assess evidence, so they should be able to do that before it’s published,” he said. “The broader issue is that they seem eager to have reached the conclusion that they reached.” He pointed out that in this case, peer review seems a little unnecessary—the review panel itself was made up of experts, so they would have had no trouble evaluating the quality of the data.

Ivan Oransky, co-founder of the scientific integrity watchdog journal Retraction Watch, echoed that sentiment. “It’s not unusual for researchers and policymakers to privilege peer-reviewed findings and publications over those that aren’t yet peer-reviewed,” he told me. But this panel was, “of course, the kinds of people who would eventually do the peer review anyway.”

As of yet, there are no signs of IARC backing off its conclusion that RoundUp causes cancer. “Despite the existence of fresh data about glyphosate,” reported Reuters, the agency is “sticking with its findings.”

But the cat is out of the bag. During an EPA budget hearing Thursday, Rep. Tom Cole (R-Okla.) asked EPA Administrator Scott Pruitt to look into the withheld evidence on RoundUp. Eisen, meanwhile, worries that IARC’s handling of this case will damage public perception of the group. “This is going to end up undermining people’s confidence in this agency’s ability to do this well,” he said. “They don’t seem interested in getting to the bottom of these things. These decisions seem based in politics.”