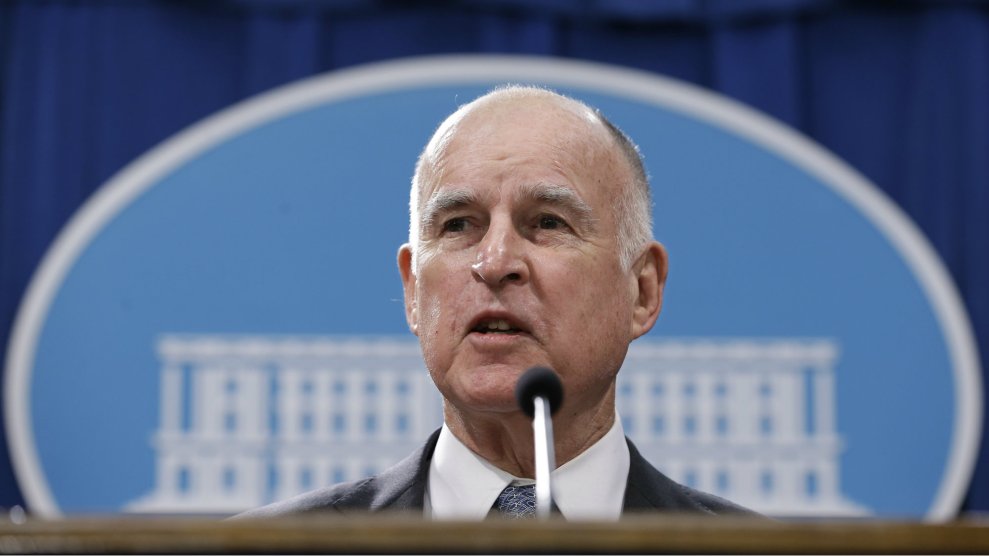 California legislators have voted to extend a centerpiece program to cut greenhouse gas emissions, burnishing the state’s reputation as a bulwark against Donald Trump’s demolition of climate change measures.

In a rare show of bipartisan agreement on climate change, eight Republicans joined with Democrats in California’s two legislative houses to extend the cap-and-trade emissions system a further 10 years until 2030.

The emissions-lowering scheme, the second-largest of its kind in the world, aims to help the state reach its target of cutting planet-warming gases 40% by 2030, compared to 1990 levels.

“Tonight, California stood tall and once again, boldly confronted the existential threat of our time,” said Jerry Brown, California’s governor. “Republicans and Democrats set aside their differences, came together and took courageous action. That’s what good government looks like.”

The cap-and-trade program, established in 2006 under then governor Arnold Schwarzenegger, sets a limit on emissions and requires polluters to either reduce their output or purchase permits from those who have. As the limit steadily becomes stricter, it nudges businesses to take the more financially attractive option of cutting their pollution.

California, the sixth-largest economy in the world, is in stark opposition to Trump’s administration. The president has said he will withdraw the US from the Paris climate agreement and has set about dismantling federal policies that lower emissions.

Brown has positioned himself as a countervailing force to Trump, visiting China to talk to its leaders about climate change and promising to build and launch weather-monitoring satellites should federal budget cuts endanger programs handled by Nasa and the National Oceanic and Atmospheric Administration (NOOA).

Many Californian Republicans remain opposed to the cap-and-trade system, warning it will pose a “crushing” blow to small businesses. But the bill ended up gaining an unusual level of Republican support, with the extension also supported by key conservative constituencies, including the California Chamber of Commerce and associations representing manufacturers and agriculture interests.

Concessions to get some Republican support, such as the limiting of separate regulations on refineries, risked alienating more liberal Democrats. Some environmental groups, including the Sierra Club, attacked the bill for allowing polluters to continue emitting greenhouse gases if they offset them with green projects, including those outside California.

But other climate activists declared themselves pleased with the outcome, pointing out that it showed that action to reduce emissions is bipartisan and popular.

“California is once again showing Washington DC and the rest of the world that fighting climate and air pollution is the right thing for our health, economy and future,” said Fred Krupp, president of the Environmental Defense Fund.

Marin and San Mateo counties, along with the City of Imperial Beach, filed a lawsuit in the California superior court to complain that 37 oil, gas and coal companies knew burning their products would increase carbon pollution and cause sea levels rise.

“Defendants have known for nearly 50 years that greenhouse gas pollution from their fossil fuel products has a significant impact on the Earth’s climate and sea levels,” the complaint states.

The municipalities are claiming damages from the fossil fuel firms, echoing a strategy used against the tobacco industry in the 1990s that resulted in multibillion dollar payouts.

The companies targeted in the lawsuit include Shell, Exxon Mobile, Chevron and BP. According to the municipalities, these businesses have caused around 20% of all industrial carbon dioxide and methane pollution since the 1960s.