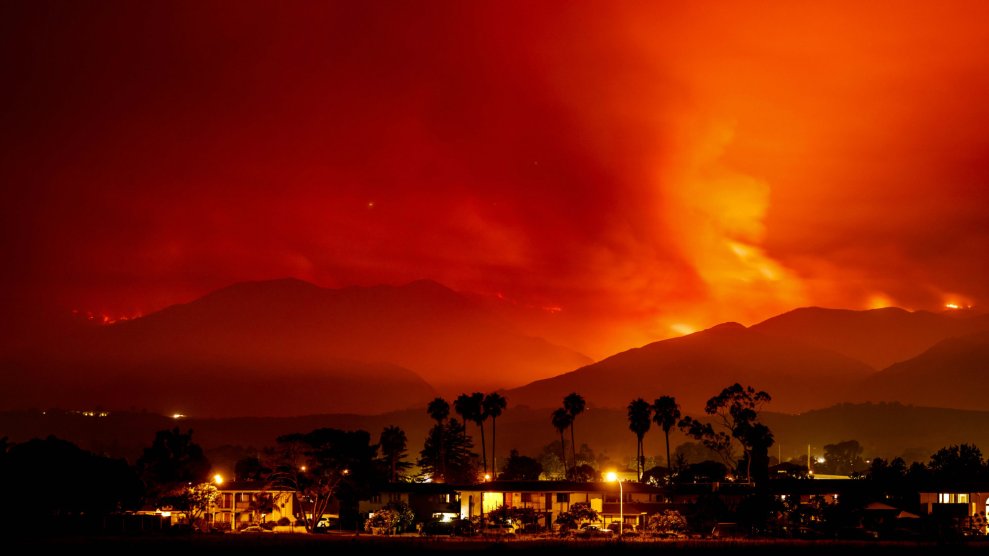 It’s wildfire season out west, and after a record-hot June dried out many areas, the prognosis is slightly worse than average for certain areas, especially California. But luckily there is relief in sight for the Four Corners region of Utah, Colorado, New Mexico and Arizona. Meanwhile, a number of fires have sprouted up in the Pacific Northwest.

The most concerning of the seven large wildfires in California is the Detwiler fire, which has driven thousands from their homes and is threatening the town of Mariposa outside Yosemite National Park. The blaze, which has reached 48,000 acres in size, according to the National Interagency Fire Center, is only 7 percent contained. More than 3,000 firefighters are battling it. In total, fires are spread throughout more than 217,000 acres in California, an area about 10 percent larger than New York City.

Jeff Weber, a scientist with the University Corporation for Atmospheric Research in Boulder, Colorado, says there isn’t likely to be any near-term relief for California. As with other Southwestern states, like Arizona and Nevada, California had an “anomalously hot” June, with many towns reporting record high temperatures for the month. (Arizona reported the hottest June on the books.)

It’s the dry season for Cali, he notes, with significant rainfall not expected until the winter. The only hope for significant rains would be if some tropical storm systems from the eastern Pacific made their way north, which is possible but isn’t in the cards in the near future.

“There have been a number of systems, but they’re far south,” Weber says. “Other than that, there’s not much hope for California to get much rain, and…probably we’ll continue to see wildfires get worse.”

He adds, “We had a persistent ridge of high pressure,” which some have called a “ridge of death,” that “persisted for an unusually long time over the Southwest.” It parked itself there for most of the month and “really dried things out,” making conditions ripe for fires. It has since moved eastward over Texas and Kansas, which are now expecting record highs over the next five days or so, he added.

For what it’s worth, such persistent heat ridges are expected to be more common in a “climate change scenario,” although one can’t point to a single weather event and say it’s due to global warming, Weber says.

On the bright side, the Golden State had an unusually wet winter, with about 2.5 times the normal amount of precipitation, so that’s helped prevent the fires from being even worse, Weber notes.

The good news is that this persistent high pressure system set the stage for a powerful monsoon season. The North American monsoon is a weather system that draws moisture from the Gulf of Mexico and California into the Southwest, and it has already begun, bringing much-needed rain to the Four Corners states. June’s high pressure system, which has now moved east, is joined by a low pressure system in southwest Arizona. (High pressure systems, in this case, involve warm air descending, and low pressures involve hot air rising from the surface.) The former system pulls air masses in a clockwise direction, while the former does the opposite, and together they act like “cogs in a wheel” to siphon moisture north into the Southwest.

As the moist air rises over the mountains of the Sierra Madre and the spine of the Rockies, it loses its ability to hold on to it, causing deluges of rain. These storms are helpful for wildfires but can also be deadly; flash flooding in Arizona killed at least nine people earlier this week. The monsoon has already brought moisture to these four states and some areas to the north, and will likely to continue to do so until September.

Elsewhere, large fires are multiplying. On July 20, 13 new large fires were reported: one each in California, Idaho, Oregon, Utah and Wyoming; two in Washington; and six in Montana, according to the fire center. Year to date, there have been more than 35,000 wildfires covering more than 4,500,000 acres, making 2017 the third-worst year in the past decade in terms of fire coverage.

But there’s some good news for the Northwest. “Mid-latitude [storm] systems should give Oregon, Wyoming and Montana some relief in the coming weeks, but these seem to miss California,” Weber says.