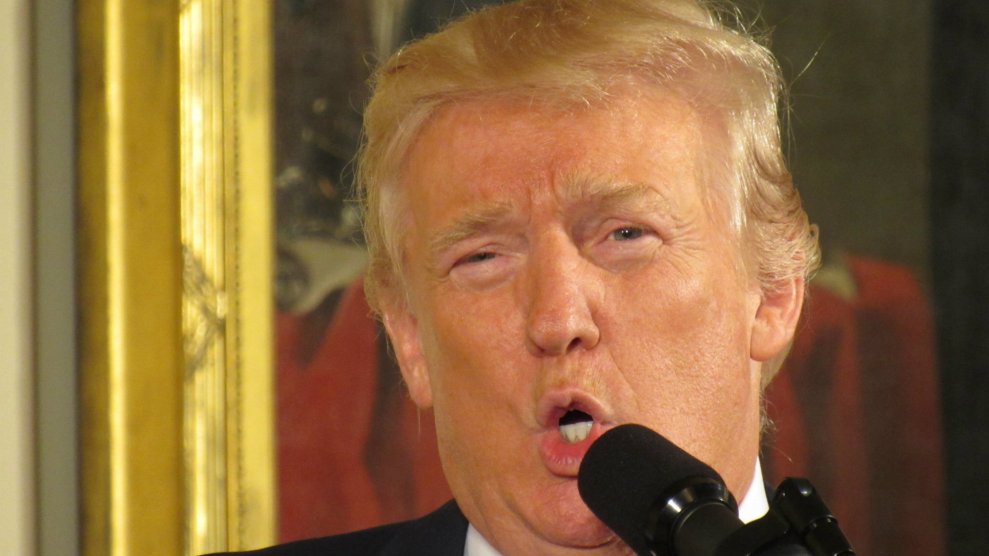 Government scientists agree that, contrary to President Donald Trump and his team’s repeated claims, climate change is already having a dramatic effect in the U.S., according to a new report.

The New York Times published an unreleased draft of the report Monday. The 543-page report was written by scientists from 13 federal agencies, including the Environmental Protection Agency and the National Oceanic and Atmospheric Administration. It concludes that temperatures in the U.S. have risen sharply, by 1.6 degrees Fahrenheit, over the last 150 years and that it is “extremely likely that most of the global mean temperature increase since 1951 was caused by human influence on climate.”

“Evidence for a changing climate abounds, from the top of the atmosphere to the depths of the oceans,” the report states. “Thousands of studies conducted by tens of thousands of scientists around the world have documented changes in surface, atmospheric, and oceanic temperatures; melting glaciers; disappearing snow cover; shrinking sea ice; rising sea level; and an increase in atmospheric water vapor. Many lines of evidence demonstrate that human activities, especially emissions of greenhouse (heat-trapping) gases, are primarily responsible for recent observed climate changes.”

“Thousands of studies conducted by tens of thousands of scientists around the world have documented changes in surface, atmospheric, and oceanic temperatures; melting glaciers; disappearing snow cover; shrinking sea ice; rising sea level; and an increase in atmospheric water vapor. “

The report, completed this year and part of the National Climate Assessment, has already been approved by the National Academy of Sciences, according to the Times. Its release hinges on the Trump administration’s approval, and one scientist who worked on the report told the Times that he and others feared the president would withhold it.

The report also finds that the average annual temperature will continue to rise throughout the century. Even if humans ceased burning fossil fuels altogether, global temperatures would climb another half a degree Fahrenheit (0.30 degrees Celsius) over this century.

With “very high confidence,” the scientists concluded that “the magnitude of climate change beyond the next few decades depends primarily on the additional amount of greenhouse gases emitted globally.”

Also, the frequency of extreme weather events, including heavy rain and heat waves, has increased and is very likely to continue to do so. And since 1880, global sea levels have risen 8 to 9 inches — roughly 3 of those inches since 1990 — with human activity playing a substantial role, according to the report.

In a post to Twitter, Gavin Schmidt, a climate scientist and director of the NASA Goddard Institute for Space Studies, said that nothing in the report is surprising for people working in the field but that it may be “shocking to those that think [climate change] is just a future problem.”

There's nothing in it surprising to anyone working in the field tho possibly shocking to those that think clm chg is just a future problem.

The report delivers a strikingly different message than the one being pushed by Trump and his Cabinet members, who continue to downplay the urgency of the threat as they work toward “energy dominance.” Since taking office, Trump — who famously called climate change “bullshit” and a Chinese “hoax” — has moved quickly to derail America’s actions to combat climate change, including rolling back President Barack Obama’s Clean Power Plan, a policy limiting greenhouse gas emissions from power plants. Trump has pegged himself as a savior of America’s dying coal industry and has vowed to increase oil and gas production, opening now-protected areas of the Arctic and Atlantic oceans to drilling.

In June he announced plans to pull the U.S. out of the historic Paris Agreement on climate change ― the international accord in which nearly 200 countries committed to slashing carbon emissions in an effort to prevent global temperatures from increasing 2 degrees Celsius above pre-industrial levels, the line scientists say the world must stay below to stave off the very worst effects of climate change.

Meanwhile, his Cabinet members have refused to say whether Trump believes climate change is real and continue to question how much the scientific community understands about the threat and the role humans play in observed changes.

In March, Environmental Protection Agency head Scott Pruitt told CNBC, “No, I would not agree that [carbon dioxide is] a primary contributor to the global warming that we see.” And in June, Energy Secretary Rick Perry echoed Pruitt’s comments, saying “no” when asked by CNBC whether he believes carbon dioxide “is the primary control knob for the temperature of the Earth and for climate.”

Perry went on to defend his and others’ denial of near-universally accepted climate science, suggesting that those who question the scientific community’s findings are more intelligent.

“Most likely the primary control knob is the ocean waters and this environment that we live in,” Perry said. “I mean, the fact is, this shouldn’t be a debate about, ‘Is the climate changing? Is man having an effect on it?’ Yeah, we are. The question should be, you know, just how much, and what are the policy changes that we need to make to affect that?”

Perry went on to defend his and others’ denial of near-universally accepted climate science, suggesting that those who question the scientific community’s findings are more intelligent.

Also in June, Interior Secretary Ryan Zinke said glaciers in Montana’s Glacier National Park started melting “right after the end of the Ice Age” and that it has “been a consistent melt.” He also dismissed the notion that government scientists can predict with certainty how much warming will occur by 2100 under a business-as-usual scenario.

How the Trump administration decides to handle the report remains to be seen. The EPA and 12 other agencies have until Aug. 18 to approve the report, the Times reported.

During George W. Bush’s presidency, federal scientists were discouraged from talking about climate change and even had climate change research altered.