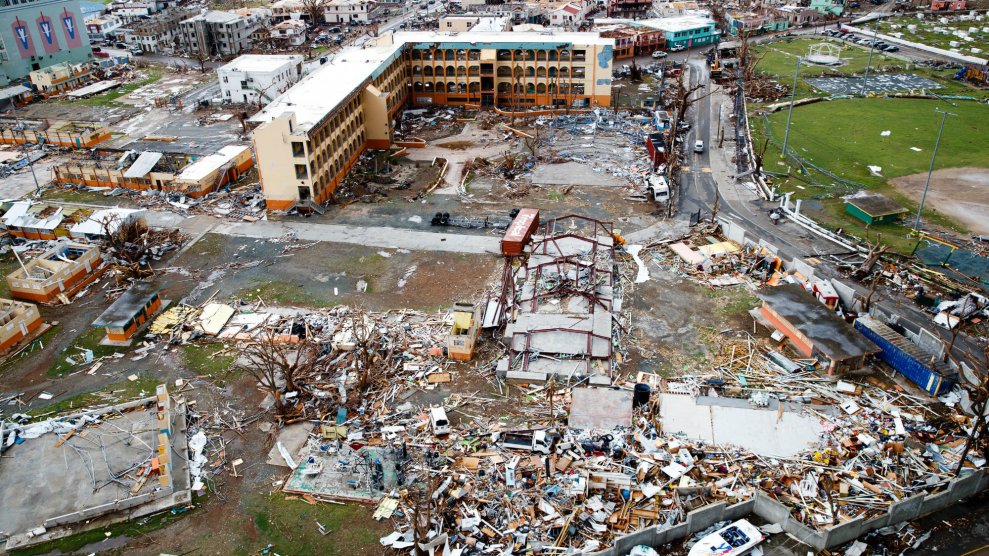 Destruction on the British Virgin Islands after a direct hit from Hurricane Irma.ames Breeden/Mirrorpix/Newscom via Zuma

After multiple intense hurricane landfalls this month, the scenes from the Caribbean have been horrific—trees stripped bare, houses flattened, million-dollar yachts strewn like toys.

Category 5 hurricanes, like Irma and Maria, are the pinnacle of nature’s fury. There is simply no weather event on Earth that can cause so much destruction so quickly. They are worst-case scenarios.

On Wednesday morning, Maria became one of the most intense Atlantic hurricanes ever recorded to make landfall, striking southeastern Puerto Rico with winds of up to 155 mph. Puerto Rican residents rationed basic supplies and hunkered down in fragile infrastructure in anticipation of the storm, which wiped out 100 percent of the island’s power. Recovery could take years.

“We have not experienced an event of this magnitude in our modern history,” Puerto Rico Governor Ricardo Rosselló said in an island-wide address Tuesday night.

There is evidence that we are emerging from an era of messy meteorological data, where we were blind to warming seas strengthening hurricanes because the really damaging ones were rare. If that’s true, weather historians may look to this year as the beginning of a frightening new phase of superstorms.

About 85 percent of all damage done by hurricanes is attributable to “major” storms—those stronger than Category 3, so roughly one-quarter of all storms. While relatively infrequent, they are by far the most destructive—a Category-5 cyclone has 500 times the power of a Category 1. Globally, major hurricanes have become slightly more common in recent decades, even as overall numbers have held steady.

Further, there’s nothing in recorded history that resembles what Irma and Maria have inflicted on Caribbean islands in recent days. Since Sept. 6, the two hurricanes have made six separate landfalls at Category-5 strength. Before this month, just 18 such landfalls had happened in the previous 165 years (and never more than three in a single year). Clearly there’s something happening here—and there’s a developing consensus among scientists about what factors are responsible.

There have been only 33 Category 5 storms in the Atlantic since hurricane records began in 1851. Twenty-three of them have formed since 1961; 11 in only the last 14 years. Part of that uptick comes from better weather monitoring equipment, like satellites that help us spot hurricanes before they make landfall. But even since we developed satellite technology, there’s been a measurable increase in major storms.

The strongest hurricanes require an exceptionally warm ocean to intensify, and with water temperatures currently near record highs in the Caribbean, it’s providing conditions ripe for Category 5s. According to the Intergovernmental Panel on Climate Change, since 1970, the oceans have retained more than 90 percent of the excess energy generated from global warming. That’s a lot of extra fuel for stronger storms.

Rising ocean temperatures have given researchers the confidence to ask the question that’s been on all our minds this month: Are we due for more Irmas and Marias in the years to come?

“The consensus among those who study the relationship between climate and hurricanes is that the incidence of intense storms—like Harvey, Irma, and Maria—should go up as the climate warms,” Kerry Emanuel, a hurricane specialist at the Massachusetts Institute of Technology, tells Grist.

In fact, just this week, a team of researchers in Japan provided fresh evidence that tropical cyclones should generally grow stronger, larger, and rainier in the future. The reasons for this are relatively straightforward: Hurricanes are built to convert heat energy into wind energy, and seawater’s available energy rises exponentially as it warms. That raises cyclones’ theoretical upper speed limit—something Emanuel tracks closely—making it more likely that any given storm will reach the level of “major.”

In an op-ed in Tuesday’s Washington Post, Emanuel argues that this year’s surge in hurricane activity shouldn’t be labeled as “natural” disasters because that designation ignores humans’ role in seeding stronger storms, as well as our long-running, worldwide coastal building boom.

A prescient study he published in March found that nightmare hurricanes that rapidly intensify just prior to landfall—like Harvey as it entered Texas and Maria this week in Dominica—should occur more regularly in a warmer atmosphere. Previous research suggests it’s normal for strong hurricanes to rapidly intensify. But Emanuel argues that a storm that revs up from Category 1 to Category 5 in fewer than 24 hours, as Maria did—making it one of the fastest strengthening storms ever measured—could eventually become 10 to 20 times more frequent of an occurrence.

For now, it’s difficult to tell from the noisy data we have, but Emanuel thinks we might soon detect a signal that hurricanes are already getting stronger faster—and this month’s storms could help make that case. And that would bring a whole new set of challenges: Bigger hurricanes that intensify more quickly would, improbably, make the worst-case scenario even worse.