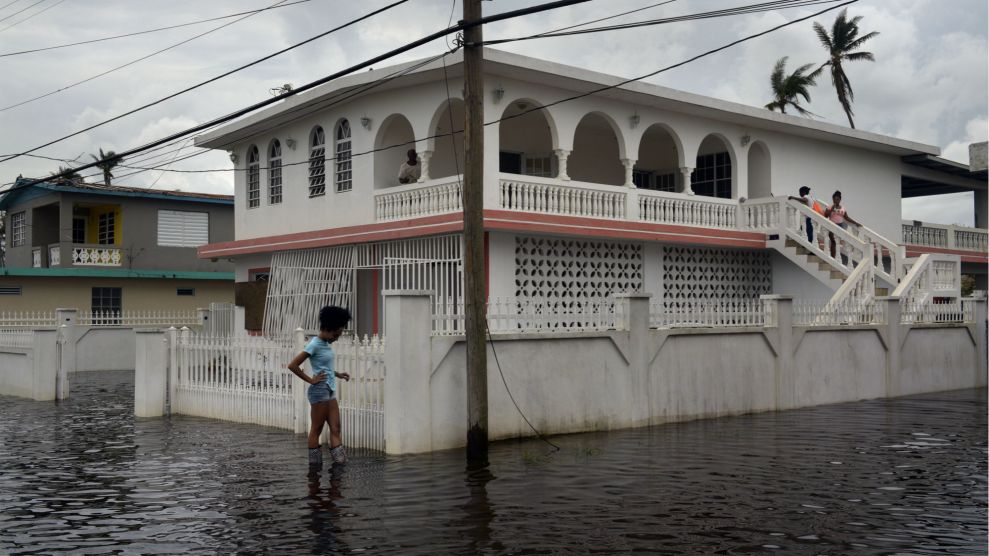 Millions of people in the Caribbean are getting a glimpse of a future that more and more people around the world will soon experience. This month’s hurricanes are the storms scientists have warned us about for decades. They have arrived — causing heartbreak and agony, wrecking homes and destroying lives.

For the millions more friends and family members watching and waiting on the U.S. mainland and elsewhere, word from their loved ones can’t come soon enough. One week after Hurricane Maria made landfall, Puerto Rico remains in a state of disarray, and communication is still largely cut off to most of the island.

Food and clean drinking water have been slow to arrive. And until recently, what had arrived was stuck in port — hampered by a combination of infrastructure failures and distracted leadership in Washington. It has all the makings of what could easily turn out to be a disaster nearly without parallel in modern American history.

Over the past 36 hours, I’ve communicated with more than a dozen people inside Puerto Rico, as well as those who have family there. The conversations have taken place via phone, email, and social media.

Here is what they told me about what life is like on the island right now for themselves or for their loved ones. These are the words of people on the front lines of climate change. (These interviews have been edited and condensed for clarity.)

I am a biology student at the University of Puerto Rico, Río Piedras Campus. I just got cell service since it went down from María. It’s the first time I saw pictures, and it’s absolutely horrifying. For the past week, our only way of learning what was happening around us was through the radio. They kept mentioning the word “disaster,” and your mind would create scenarios. But in no way does it compare to the absolutely heartbreaking reality.

There was a lot of optimism right after the hurricane. I drove around the metropolitan area near home and saw the destruction and thought: We will get through this. But seeing the actual pictures now, after the cell service has been restored, it’s really difficult to stay hopeful. It’s as if being blind to all the destruction because of the communication blackout was what was keeping us hopeful because we didn’t fully comprehend what a horrible reality we had ahead of us.

We knew it was bad, but never this bad. I’ve been a week without cellphone reception, water, or electricity, and after seeing those pictures I’ve never felt so blessed in my life.

We just got cell service today (very limited). My wife and daughter worked in hotels; they now have no job. I’m disabled temporarily due to knee operation, and we have small children to attend to. We don’t see ANY of the help they’re talking about, etc. And we have to stand on daily lines UNDER THE PUNISHING SUN just to get two bags of ice. The lines for gas are more critical and dangerous.

A.I don’t really know how to even answer that question. There’s a lot of shock and confusion.

My home is on the beach, it’s fine. But my office has five feet of sewage in it, and I have a smashed car. I want to get my family out of here. We heard gunshots an hour ago. We got to lock up tighter than we ever have before. A week from now, I hope my wife and 4-and-a-half-year-old child will be in Miami.

We’re going to be feeling this for a really long time, long after the lights come back on and the streets get cleared. There isn’t a tree that isn’t damaged. After a block of walking around, you just think “this shit is everywhere.”

How do you rebuild a whole island? I don’t even know what that means.

People sleep in gas stations for days waiting for the gas truck to arrive. Out of 1,600 cell towers only 300, approximately, work; 99.7 percent [of people] are still with no power, and still no plans on how to get the grid back online.

“Seeing the actual pictures now, after the cell service has been restored, it’s really difficult to stay hopeful.”

I am a business owner. I run a small digital and social media shop on the island, and I have lost contact with all my clients do to the failure of comms. Yesterday I bought a one-way ticket to Miami, and I don’t know when I’m coming back. I have to provide for my family. We don’t want a bailout — we just want to be treated equally. We deserve it!!

Aida’s sister Ana is a pharmacist in Guayama, a city in southeast Puerto Rico, near where Maria made landfall. Ana has a satellite phone and is in daily contact with Aida.

Q.What’s happening right now for you and your family?

A. It’s been the hardest week ever. I was one of the few people to hear from my sister within 36 hours [of Maria’s landfall], but there’s still families waiting to hear from their loved ones.

She managed to get her pharmacy open, but I’m worried for her safety. As a backup plan, she had a satellite phone just in case for her patients, people being able to get their prescriptions. People are scared, they’re running out of food.

We were told, growing up, that to prepare for a hurricane, you need five days of food and water. After that you expect the grocery stores to open or help to arrive. It’s been five days. It’s hell right now. There’s just no words to describe it. People are starting to get desperate. They’re realizing this is long term. They don’t have cash. They don’t have anywhere to buy goods. It’s a humanitarian crisis. They need help, like yesterday.

As days continue passing, we continue to see images and horror stories. No way I can sleep or feel good seeing the disaster my island is going through. It’s a very desperate feeling not knowing how your family is. You are seeing the stories going around of people with no power, no gas. People in the island right now are like crazy, wondering if their family is OK.

“I want to get my family out of here. We heard gunshots an hour ago. We got to lock up tighter than we ever have before.”

One thing that’s happening is people are saying: “If you have a phone and you have a signal, just take a picture of people and say, ‘PR, we are O.K.’ Just post it on social media, and hopefully it will arrive to whoever knows that person.”

A former member of President Obama’s White House Task Force on Puerto Rico, Negron says the group has reorganized on an ad-hoc basis in the wake of Maria. She has yet to make contact with her family and friends on the island.

We talk daily to the governor’s office in Puerto Rico. We really are just trying to avoid a Caribbean version of Katrina right now.

Basic food, water, medicine, supplies are not reaching the people equitably. There are people on the island who have run out of food and water. I’m livid. The only thing that keeps me going is working, but time is just not on our side.

If we can do this as volunteers from the outside, what the heck is taking our administration so long? We need all hands on deck, and we don’t have them right now. That, to me, feels criminal.

If folks stop talking about it, we’re going to be in big trouble. More climate disasters are on the way. We need to start preparing now.

My grandma is 89, and we’re hoping she gets out of Puerto Rico tomorrow at 3:30 p.m. She never regained power from Hurricane Irma. This needs more awareness and attention. The anxiety and stress sitting here with no communication keeps my family and I up at night.

My family is there. I’m in grad school in London and am the only link they have to outside world via my dad’s barely functioning WhatsApp. There are hundreds of nursing homes currently without power or running water or communications.

“People are starting to get desperate. They’re realizing this is long term. They don’t have cash. They don’t have anywhere to buy goods. It’s a humanitarian crisis. They need help, like yesterday.”

We’ve been desperately trying to find a flight out for my grandmother with Alzheimer’s, who’s in a nursing home in precarious conditions. I fortunately managed to get a flight for [my grandmother] this Friday to my aunt’s house in the U.S., only to find that airlines keep canceling pre-sold flights because airplanes would have to fly over empty, and no one knows when the airport will actually open to commercial airlines. They keep pushing the date, and official info is scarce. Millions of vulnerable people are stranded.

I have a 90-year-old great aunt and a cousin that survived the storm in Aguadilla, Puerto Rico. Last night after several tries, we were finally able to make contact with them. They told us they feel that they are living on the forgotten island.

It’s been heartbreaking waiting this long. As far as I know, they’ve been going to a local hotel just to stay in air conditioning. With my great aunt’s age, she can’t stay in the heat for too long. They don’t have too much access to media coverage or information. As far as they know, the power is going to come on tomorrow. My aunt wants to stay in the house because she’s afraid otherwise looters or squatters might try to break in. They live right next to an old army base, I’m hoping that eventually they’ll be able to get supplies through there.

I was living in Long Island when Sandy hit, and for two weeks I didn’t have power either, so I have an idea of what they might be going through. But we weren’t in the Caribbean, so there was no 100-degree temperatures with humid air. I’m no climate expert, but I don’t think it’s a coincidence there’s been so many bad hurricanes all at once.