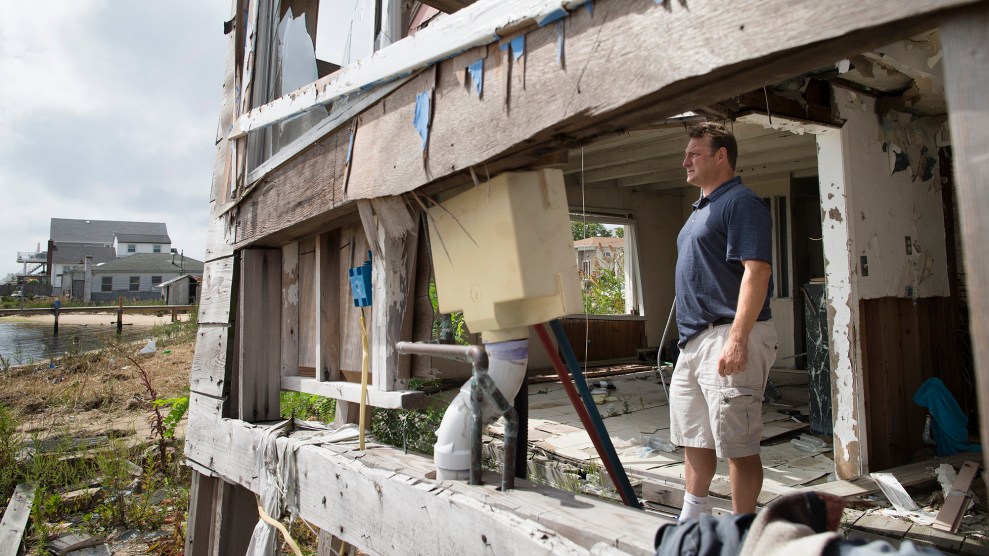 Gary Silberman stands for a picture as he guides reporters on a tour of his parent's home that was destroyed by Superstorm Sandy, Friday, Sept. 5, 2014, in Lindenhurst. After Silberman received nearly $17,000 in assistance from FEMA, the agency is demanding a return on the funds. John Minchillo/AP

This post was originally published by HuffPo and appears here as part of the ClimateDesk collaboration.

Nearly five years after Superstorm Sandy destroyed their house, Sophia Vailakis-DeVirgilio and her family are still waiting to rebuild and return to their property. It’s a nightmare she fears many in Texas, Florida and the Caribbean have only just begun.

“God help them,” Vailakis-DeVirgilio told HuffPost, adding that when it comes to securing insurance money from the Federal Emergency Management Agency she expects those hurt by the back-to-back, record-breaking hurricanes will “get raked over the coals.”

Vailakis-DeVirgilio and her husband had been paying into the National Flood Insurance Program for nearly a decade when the storm surge from Sandy inundated their home in Broad Channel, New York. The damage was extensive. The walls of their newly renovated seaside cottage were blown out, and the water “rocked and twisted” the house, knocking it from its foundation, she said.

The couple did what it was supposed to: They filed a flood claim with FEMA, which oversees the federal flood insurance program—established by Congress in 1968 to provide low-cost insurance to people living in flood-prone areas. As they would soon find out, being an NFIP policyholder doesn’t necessarily mean that rebuilding in the wake of a natural disaster will happen quickly.

A few months after filing their claim, the family was cut a “lowball” check for $69,000, Vailakis-DeVirgilio said. Unsatisfied, the family hired an attorney. It would be more than 2½ years of fighting FEMA and the insurance company—while her husband Lenny was undergoing treatment for liver cancer and hepatitis C—before they received an offer they found acceptable. That settlement remains confidential.

Since receiving the money they were owed, the couple has dealt with numerous other issues that have prevented them from rebuilding, including a contractor who defrauded them of more than $40,000 and numerous issues with permits, she told HuffPost. Vailakis-DeVirgilio, her husband and their 15-year-old daughter have moved four times since the Sandy disaster and are currently living in a rental home three doors away from their vacant property.

Vailakis-DeVirgilio’s husband, a former New York City schoolteacher, has drained his retirement account. And had it not been for her job, working a condensed three-day workweek on a computer help desk, she says she would never have been able to wage such a battle.

Vailakis-DeVirgilio was among a number of Superstorm Sandy victims who traveled to Washington this week to warn the victims of hurricanes Harvey and Irma that their problems have only just begun and to urge them to be vigilant as they fight to recover.

“The storm is the easy part,” George Kasimos, founder of Stop FEMA Now, a citizen advocacy group fighting to reform NFIP, said during a news conference Wednesday at the Longworth House Office Building on Capitol Hill.

The NFIP, which is now almost $25 billion in debt, was set to expire Sept. 30. But with national attention on the struggling program and little time for constructive reform, Congress passed legislation extending it until Dec. 8. The punt was tucked into an agreement struck by President Donald Trump and Senate Democrats to provide billions of dollars in disaster aid for Hurricane Harvey, raise the debt ceiling and keep the government from shutting down.

Stop FEMA Now is among a number of groups calling for an overhaul of NFIP. Its members say it’s time that the program protected homeowners from outrageous premiums, pushed money to storm victims rather than insurance companies and government contractors, and held insurers and engineers accountable for fraud.

Augie Matteis Jr.’s law firm represents more than 1,200 clients in New York and New Jersey who opted to reopen insurance claims in the wake of Superstorm Sandy. Nearly five years after the disaster, 900 of those clients are still waiting for a reimbursement, he said, adding that Irma and Harvey victims need look no further for a glimpse of what they’re up against.

“When is this mess going to end?” Matteis asked. “This is the proverbial swamp of Washington that people talk about. Somebody needs to stand up now and make FEMA pay these claims fairly—not next year, not next month, but right now.”

“This is the proverbial swamp of Washington that people talk about. Somebody needs to stand up now and make FEMA pay these claims fairly—not next year, not next month, but right now.”

What was once a self-sustaining program has been walloped in recent years by an increasing number of claims following costly natural disasters, including Sandy and Hurricane Katrina in 2005. In fact, 1 percent of the roughly 5 million policyholders account for 25 to 30 percent of all claims, according to Scientific American. The Government Accountability Office has labeled the program as “high risk,” citing “structural weaknesses in how it’s funded.” And in a report published Sept. 1, the Congressional Budget Office found that the program is operating at a $1.4 billion annual shortfall.

In a call with reporters before the Stop FEMA Now news conference, Roy Wright, FEMA’s deputy associate administrator for insurance and mitigation, said the agency had taken steps in recent years to refocus the program on policyholders, to be more transparent and to make the appeals process more fair. He said he was committed to ensuring policyholders are paid “every dollar” that they are owed.

Losses from Hurricane Harvey alone are expected to cost NFIP $11 billion. So far, 84,000 Harvey victims have filed claims with FEMA, and the flood insurance program has divvied out $177 million in advanced payments—a figure Wright said he expected to “rapidly” climb.

Then there’s Hurricane Irma, which pummeled islands in the Caribbean before moving on to the Florida Keys and the U.S. Southeast. Although still early, Irma will only further stress a program that, as The Naples Daily News in Florida reported, has just $1.5 billion on hand and $5.8 billion in borrowing authority.

Among those who shared their personal horror stories Wednesday was Diane Mazzacca, whose 1,400-square-foot home in Beach Haven West, New Jersey, was flooded with 4 feet of water during Sandy. She said she’s been fighting an initial payout offer of $27,000 and has yet to receive a full reimbursement. Her advice for anyone affected by Harvey or Irma: “Put on your big girl pants, because it’s going to be a long, bumpy ride.”

“My heart breaks for everybody that has been hit with these floods,” Mazzacca said, holding back tears. “I know that their task at hand is going to be beyond stressful.”

Phil Nufrio, a professor of public policy, administration and emergency management at Metropolitan College of New York whose Seaside Park, New Jersey, home was damaged by Sandy, said people will be “undercut” and “shorted” by the agency.

“Take pictures. Tons of pictures,” Nufrio said. “Keep your receipts, organize your receipts, because you are going to go through a quagmire of government bureaucracy.”

Rep. Tom MacArthur (R-N.J.) joined the group of Sandy survivors in calling for a reform of the NFIP. He said the program is “essential” for America’s coastal communities and has been successful in driving safer building standards. Instead of vilifying it, it’s time to fix it, he said.

“We cannot let the program lapse,” he said. “It will be a disaster for the American people.”

MacArthur also stressed that while all eyes are on Texas and Florida right now, FEMA’s job “is far from being done” in New Jersey and New York.

Like others who spoke Wednesday, Vailakis-DeVirgilio said she’s all for reforming NFIP to make it more sustainable and holding insurance companies accountable. But she sees a bigger issue that can’t be ignored: climate change.

“It’s not just ‘let’s just move people.’ We have to do more than one thing,” she said of fixing NFIP. “I’m a registered Republican. Climate change is real. I’m a climate refugee, my whole family is. We can either take the bull by the horns and be at the forefront of technology and the economy of climate change and how we can correct it, or we can let the rest of the world—like China—do it.”

Vailakis-DeVirgilio also fought back tears when asked about the people whose lives and homes have been devastated by Harvey and Irma.

“If I could go down there and help every single one of them I would,” she said. “Right now I have to focus on getting [my family] home.”

Willa Frej contributed to this report.