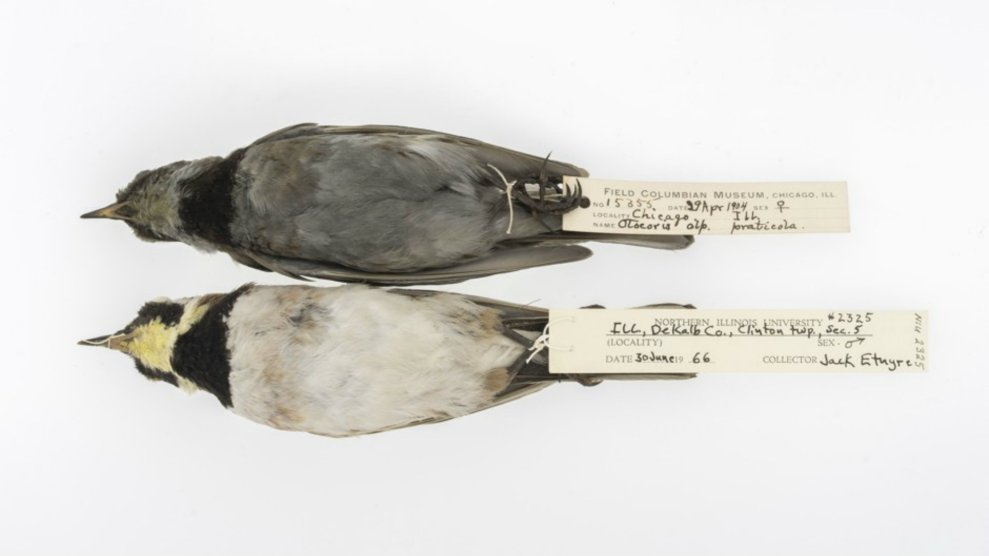 In March 2016, a flock of pigeons took to London’s skies with petite vests strapped to their backs. The tech firm Plume Labs had conscripted the winged denizens as a corps of citizen scientists with a unique vantage point on the city. As the birds swooped around the metro, a sensor in their vests would capture air quality readings. The stunt was an effort to raise awareness about the pollution cloaking the capital—a serious issue all too easy to overlook, the project’s developer told CityLab, because “it’s an invisible, essentially intangible problem.”

In this case, researchers deployed the birds deliberately, as a gimmick to raise awareness and assemble measurements. But across the Atlantic, birds had been collecting air quality data a century earlier, and no one was the wiser.

When someone finally decoded the measurements they harvested, it was because the pollution problem wasn’t invisible at all: It was inscribed on the birds’ bodies, in the form of feathers darkened by fouled air. The soot-smudged plumage was hiding in plain sight, on deceased and preserved specimens housed in the collections of natural history museums.

Some birds had become incidental proxies for pollution. The proof was in their slate-hued chests. By analyzing the black carbon particles that still clung to the feathers of 1,347 birds stowed away in museums across the U.S. industrial belt, Carl Fuldner and Shane DuBay, graduate students at the University of Chicago, were able to piece together a portrait of the pollutants that hung in the air across states including Pennsylvania, Illinois, and Michigan between 1880 and 2015. The researchers plumbed the collections of Chicago’s Field Museum, as well as the University of Michigan Museum of Natural History in Ann Arbor, and Pittsburgh’s Carnegie Museum of Natural History, and compiled their findings in a paper published this month in the Proceedings of the National Academy of Sciences.

Contemporary air-quality research leans on real-time sensors, often mounted on backpacks, lampposts, or fleets of roving garbage trucks. By perceiving pollution at a block-by-block level, these methods allow researchers to ascertain the geographic component of pollution. Most records of historical pollution, on the other hand, have taken a zoomed-out view. The birds offer a new degree of specificity. Since birds molt each year, their feathers are a reliable time capsule—and because the institutions’ tags include information about where the species were collected, it’s possible to glean precise spatial information, too. Fuldner says the researchers can place a specimen within a specific state, county, or city—and sometimes even to a specific cranny of a metro area, “down almost to the street corner.” One of the sootiest birds was collected in Joliet, Illinois, home to a massive steel refinery that coughed black plumes into the sky.

“A lot of what we know about pollution in the early part of the century, piecing together the environmental history comes from anecdotal accounts,” Fuldner says. The degree of specificity the researchers derived from the feathers affirmed anecdotal chronicles, and allowed them to track the effects of policies that curbed emissions and reformed urban air. Despite the deep trove of written dispatches about slogging through Chicago’s once-fetid streets, Fuldner says it’s easy for for modern-day readers to assume that the speakers took some creative license with embellishments. Many of the chronicles do reach for the poetic: In July 1890, one reporter for the Chicago Tribune wrangled metaphors to make sense of the soot that rained down on buildings and pedestrians, soiling everything in its path:

“The smoke nuisance in the region west of Wells and south of Pearson streets is of large proportions and of athletic build. It has daily encounters with two fellow-giants—dust and stench—and not being able to settle the question of superiority, they join forces and make war on mankind.”

The researchers’ data affirms that the tales aren’t apocryphal: The birds’ relative filthiness or cleanliness tracks with broader changes in air quality. The researchers found that carbon deposits on the feathers peaked in the early 20th century, and remained fairly high until they tumbled during the Great Depression, when overall coal consumption was low. Black carbon then inched back up during World War II, and then sootiness plummeted as cities transitioned away from coal and sought alternative fuel sources, such as natural gas and petroleum. The authors cite city-specific regulations to reshape the clogged skies: In the ’40s, Pittsburgh and St. Louis subsidized harder coal that didn’t leave trails of soot; by the ‘50s, the Air Pollution Control Act funneled funds to monitor air quality. The Clean Air Act followed a decade later.

The project started a few years ago, when Fuldner and DuBay began talking about visual documentation of the natural world. Fuldner, an art historian, was curating an exhibition of wildlife photographs at a science library; he enlisted DuBay’s expertise as an evolutionary biologist to see whether the images of birds “might have any sort of interest outside of being historical curiosities.” Images captured in the field depicted birds in their natural habitats—which, over the course of the 19th and 20th centuries, were rapidly and dramatically altered by humans and industry.

That same period of breakneck industrialization coincided with a blossoming of natural history collections in American museums. Specimens preserved in museum drawers were many steps removed from their former habits, but Fuldner and DuBay wondered if there was a way to collapse that distance. They hatched a plan to mine museum collections, to shed light on what birds’ discolored feathers reveal about the history of pollution and environmental policy.

Over the years, a few curators had attempted to freshen up some of the dingier birds, rinsing off the oil slick that clung to the feathers; some annotated their efforts. “Fortunately for us, the curators were unsuccessful in trying to wash them,” Fuldner says. The sticky record stayed intact.

Fuldner says future work could also attempt to drill down with increasing precision to look for spikes and dips that map on to particular spans of time, such as catastrophic fog events, or large coal miners’ strikes. And since black carbon worms its way deep into the alveoli in the lungs, Fuldner says that studying pickled lung samples—also tucked away in museums—might offer clues about historical respiratory distress.

Meanwhile, air has gotten cleaner, but it’s not free from pollution. “The fact that the more recent birds are cleaner doesn’t mean we’re in the clear,” DuBay said in a news release. In an effort to meet emissions-reduction targets and to lighten the load of pollution in the air, cities from London to Paris are pledging, for instance, to remove cars from streets. The current pollution culprits, such as PM2.5, might not leave such conspicuous traces on birds’ feathers, but there will no doubt be future repositories to plumb. Museums are still collecting specimens, Fuldner notes (often birds that crash into buildings, or perish during migrations). Years from now, those bodies—and their labels, which often contain GPS coordinates—might yield even more secrets about the natural world, and our long-term, anything-but-natural manipulation of it.