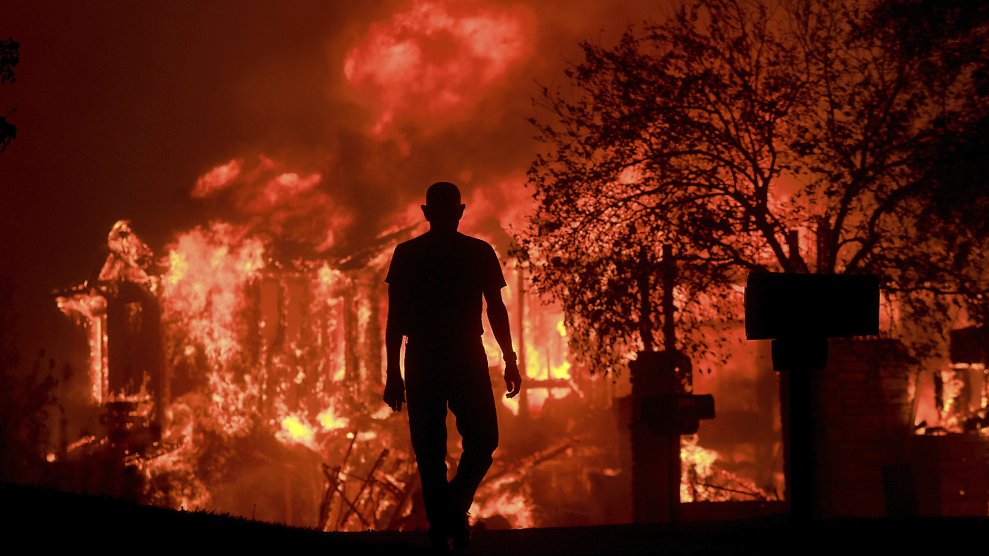 In Sonoma County, California, where wildfires have entered urban areas and burned neighborhoods to the ground in recent days, American Red Cross volunteers have created makeshift evacuation centers in local buildings, including a veterans’ hall, churches and schools. Early Monday morning, people whose homes had burned or were at risk began arriving at the centers, including Grace Pavilion at Sonoma County Fairgrounds in Santa Rosa; that night, 700 people slept on cots in the pavilion. On Tuesday afternoon volunteers expected hundreds would stay there again.

By Wednesday midday, the death toll in the seven-county region north of San Francisco had risen to 23. Government officials say that number could rise; residents continue to evacuate from a series of blazes that firefighters have yet to contain. In Sonoma County, hundreds of individuals are apparently reported as missing. Across several counties, over 100,000 acres had burned and at least 3,500 structures had been destroyed. More than 25,000 people have fled the area. President Donald Trump approved emergency disaster relief funds at the request of California Governor Jerry Brown on Tuesday. The cause of the fires is not yet known.

At the fairgrounds pavilion on Tuesday, members of the National Guard directed a steady stream of cars coming in and out of the parking lot, amidst a smoky haze from nearby fires. Many of the evacuees eating lunch, receiving medical care, or relaxing on cots inside were senior citizens from two local retirement communities. Volunteers had set up an ad-hoc medical clinic, a phone-charging station, a kids’ play area and a dining area where the Salvation Army was providing food. Donations poured in from businesses and private individuals—everything from bottled water and pillows to tampons and toothbrushes. That afternoon a volunteer wandered up and down rows of green cots with a box of cheap reading glasses, handing them out to anyone who needed them.

One evacuee, Toni Anderson, 56, lives in an assisted housing unit for residents with mental illness, in Santa Rosa. She evacuated at 4 a.m. Monday morning, after her case worker told her she had five minutes to gather her things. Anderson brought a bag with a couple of changes of clothes, medication, her laptop and purse. “They were worried the ammunition store nearby was going to blow,” she said. Like many evacuees, Anderson didn’t yet know whether her building was still standing. She heard the Kmart nearby was caught in the blaze, along with other local businesses. “I’m not in a hurry to get back,” she said.

Red Cross shelter site manager Roy Pitts said that all evacuated neighborhoods were still off limits as of Tuesday afternoon. Authorities have instructed residents whose houses were in the path of the fire not to return home until the area is deemed safe.

Christina Littlefield, 39, also slept at the fairgrounds Monday night. She evacuated from a woman’s shelter at 3 a.m Monday morning. The fire was just her latest trouble: Before finding a long-awaited spot at the shelter, she was homeless. Last week she underwent surgery related to recently diagnosed breast cancer, and she will run out of her pain medication this Friday. Now Littlefield doesn’t know where she’ll end up if the women’s shelter burns. When I met her on Tuesday, she was trying to reach her doctor by phone, though it was unclear whether the office was closed because of the fire.

An elderly couple arrived on Monday. Pitts showed the woman to a cot in the female dormitory, and her husband to the men’s space. The man began crying. He told Pitts, “We’ve been married 40 years and never been apart.”

A ten-minute drive northwest, at the Finley Community Center, volunteers fed an estimated 700 people breakfast on Monday. Pitts, a Point Reyes Station, California, resident, estimated about 250 people were there on Tuesday. “The people that we have are more vulnerable populations,” Pitts said. Managers had set up rooms for different groups: single men, single women, families, people with dogs, with cats, and special medical needs.

The atmosphere at Finley on Tuesday afternoon was busy as evacuees tried to connect with loved ones, some waiting desperately to hear whether the fires had spared their homes. Pitts described the arrival of an elderly couple on Monday. Pitts showed the woman to a cot in the female dormitory, and her husband to the men’s space. The man began crying. He told Pitts, “We’ve been married 40 years and never been apart.” The Red Cross volunteer changed course, retrieving the man’s wife and placing the couple, together, in the special medical needs dormitory.

City and county staffers in Santa Rosa train in disaster response; many of them were supporting Red Cross workers at the evacuation centers. Jodi Alton, who normally works as an administrative assistant at the Finley Community Center for the city of Santa Rosa, has been helping run the evacuation facility since Monday morning. Her own home sits on the edge of an evacuation zone. “Yesterday morning I could see flames from my house and could hear propane tanks (at people’s houses) blowing up,” she said. “It sounded like a war zone.” Like many others, she’d been closely following the fires’ movements and regularly checking the website and smartphone app Nixle, which sends periodic updates about neighborhoods in danger. Her sister-in-law, a deputy sheriff, had been called to patrol evacuated neighborhoods to deter looting.

As evacuees find other places to stay, either returning home or moving on to the next best option, Red Cross will begin consolidating the centers and closing those no longer needed. Pitts anticipated at least some facilities will house evacuees through the end of the week. “The number one question for people,” he told me on Tuesday, “is ‘When do I get to go home?’”