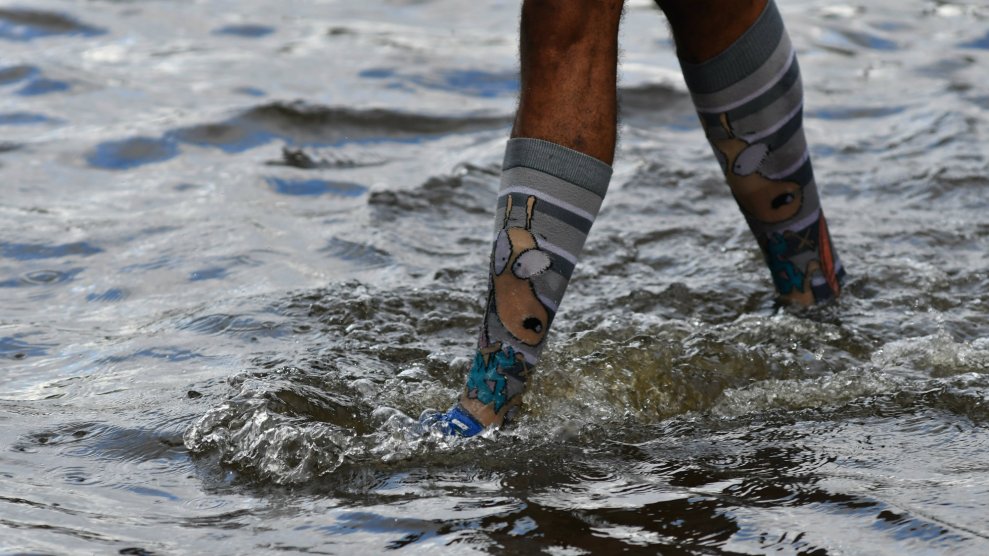 Jacksonville’s Northside region was covered with swampland before the 1950s. The floodplain was home to some bait and tackle shops, commercial fisheries, and luxury waterfront homes, but all that changed as the fledgling city grew.

Builders constructed middle-class white suburbs in Northside, at first out of the way of major tributaries that were known to regularly spill over and flood—and then, to keep up with demand, eventually right near the waterways. Home prices in the Northside area began to drop in the ‘70s, as newer suburbs eventually went up in the city’s Southside area. Many lower-income black residents who had been longtime renters jumped at the opportunity to become homeowners in the city’s neighborhoods near the Ribault River. “Like the show, ‘The Jeffersons,’ they were moving on up,” said Lloyd Washington, Grand Park Community Association president.

What these buyers didn’t know—or what they chose to risk—was that these neighborhoods were cheaper because the homes were built in a flood zone without underground drainage or nearby retention ponds, which state law didn’t require until the early ‘80s.

Hurricane Irma smashed into Jacksonville this fall, and the storm’s impact highlighted one of the worst-kept secrets in urban real estate: Floodplains in U.S. cities with residential properties are almost always occupied by the poorest residents of those areas, said Mechele Dickerson, a University of Texas, Austin, bankruptcy law professor and an expert in real estate equity issues.

Nationally, areas with known flooding—which, like the Northside homes, were usually built half a century ago—are going to be valued much lower than areas with proper drainage and flood protection. Residents who settle there “don’t have other options,” Dickerson said. This cheap property comes back to bite residents when a storm comes knocking. “There’s a lot of people on the Northside who need a lot of help,” Washington said. “A lot of these people just did not know they were in flood plains. A lot of them didn’t have flood insurance because they just did not know.”

While wealthier communities are still facing extensive repairs after Irma, which dumped about 20 inches of rain on the city, compounded by a strong high tide that overflowed the banks of the St. Johns River, much of those areas drained within hours. But some neighborhoods near Jacksonville’s Ribault River held water for days, and residents now face the task of gutting their moldy homes.

Jacksonville has long faced a problem with flood control in the Northside area. A 1969 report from the U.S. Army Corps of Engineers stated anything north of major St. Johns River tributaries, such as the Ribault River and Trout River, would likely flood in a strong storm. At the time, only 200 homes were in danger. Today, neighborhoods, businesses, and even college buildings span every direction from those tributaries.

Experts often cite Hurricane Dora, which struck in 1964, as the clearest parallel to Irma. A 1975 U.S. Geological Survey report about the storm recalled “record flood stages on various streams in the [tributary] area,” exacerbated by a strong high tide. By that time, development had already picked up, and the report estimated 3,500 homes and a naval station were at risk in Jacksonville’s Northside area from a severe flood.

When many people bought homes in Washington’s neighborhood of Grand Park, they didn’t know it would regularly flood several feet during the rainy months, Washington said. “When it rained, we passed out boats,” he said. “That was it. It didn’t take much to put Grand Park under water.”

He said his neighborhood got together in the 1980s and lobbied the city council to install proper drain pipes, retention ponds, and other stormwater systems. The work concluded in the early 2000s. “Forty-nine million dollars later, 20 years later, the problem has finally been addressed,” he said. During Hurricane Irma, only one street in Grand Park flooded, Washington said—and it drained in less than an hour.

When a new neighborhood is built in Florida, the owner of a subdivision is required to install underground drainage, stormwater pipes, retention ponds, and a host of other items like phone lines before a permit can be issued to build the first home, said the former Jacksonville City Councilman Warren Jones, who represented Northside during the fight to get drainage in Grand Park. But with old neighborhoods, that burden falls in a legal grey area. “Some of those neighborhoods, if that was virgin land, developers couldn’t have built those homes today,” Jones said.

“Some of those neighborhoods, if that was virgin land, developers couldn’t have built those homes today.”

Through the years, Jacksonville’s Northside neighborhoods have inevitably flooded during hurricanes and large summer storms. Jones said he sometimes sees teenagers walking to school in the middle of the road in one inland Northside neighborhood because the sidewalks turn to unintentional retention ponds after rain. Some neighborhoods have benefited from sporadic efforts to improve drainage over the past decades, and some now have storm drains at intersections, but Northside advocates say much more work is needed.

Jacksonville Mayor Lenny Curry and several city commissioners did not respond to multiple emails and phonecalls to speak with CityLab for this article.

Some neighborhoods, like Grand Park, got complete drainage revamps and some areas have found relief in smaller, incremental projects over the course of decades, said the former Jacksonville Mayor John Delaney, adding that his administration allocated “hundreds of millions of dollars” for drainage. But a Tampa Bay Times investigation found that half of all flood control projects that were active in 2015 didn’t have any funding source. The investigation found that some of those projects’ funding was deferred due to the after-effects of the 2008 recession, and some flood protection efforts fell through amid political squabbles.

Delaney said the city government didn’t tackle all of the drainage issues that came up during his tenure from 1995 to 2003 because the budget couldn’t stretch that far, but the city stepped in and worked to clear Grand Park of persistent flooding because water was regularly getting into residents’ homes whenever a large summer storm blew through. “If, with some regularity, [water is] getting into homes, it’s up to the local government” to fix it, he said.

Dickerson said Jacksonville’s situation is similar to other large metropolitan areas with old neighborhoods in floodplains. When Hurricane Harvey hit Houston this summer, large swaths of low-income neighborhoods flooded. Seventy-five percent of the land that flooded during the hurricane wasn’t marked as a flood zone in FEMA’s most recent flood maps, according to a study from Rice University and University of Texas-Galveston.

These areas often fall between the municipal cracks. “We are OK with those areas being a danger and a disaster waiting to happen. We don’t go back and tell the owners, ‘You have to fix this up to code.’ We don’t say, ‘City, you have to put money into the infrastructure here.’ We allow it to be as it is,” Dickerson said.

The University of North Florida ocean engineering professor Don Resio said it can be difficult to determine who is responsible for paying for flood protection projects in Florida. Homeowners often can’t pay for massive infrastructure projects on their own. Typically, the city or the state works with the U.S. Army Corps of Engineers for projects like dredging the local port, but Resio said it can be difficult to convince any one agency to make preventative action a priority in low-income areas. Meanwhile, a city council might deprioritize neighborhoods whose residents don’t hold much political sway, and fears of gentrification sometimes keep residents from advocating for change, Dickerson said. “It’s politics and politics of wealth,” Resio said. “Money speaks and people with very expensive places speak louder than many, many people with no money.”

One solution that has been somewhat effective in Jacksonville’s Northside is the use of swales—large open-air dirt ditches where rainwater can drain, ideally to a retention pond, Delaney said. Delaney stated the swales can move more water than standard underground residential stormwater pipes. The solution is a cheap, quick fix in the area that can be kept up with just a weedwacker.

But Jacksonville’s longterm future is going to require addressing flooding’s multiple causes, including sea level rise due to climate change, Resio said. “Sea level rise is inevitable and the response to it needs to be better thought out,” he said.

Although Northside residents are digging their belongings out of moldy homes and spending their meager savings on hotel rooms, the impact on these communities could have been much worse if Hurricane Irma had come through as a Category 4 or Category 5, Resio said. If the water had been two feet higher, he said, currents could have destroyed roads and bridges and gotten into areas that store toxic waste.

To safeguard its future, Jacksonville needs to invest in water pumping systems to remove water from low-lying areas and work on rebuilding natural flood barriers, Resio said. But, he added, it can be difficult to convince city or state officials to pay millions of dollars for a preventative project, even if it can ultimately shrink the cost of another major disaster down the line.

There also needs to be more of a priority on protecting Jacksonville’s most vulnerable residents from a well-documented threat, Jones said. Warming Atlantic waters are expected to ferry stronger hurricanes to Florida’s shores, and sea-level rise will likely exacerbate high-tide floods like the city saw during Dora and Irma. Hurricane Irma will not be the last time Jacksonville floods, Resio warned, and next time could be far worse.

That’s a tall order, Jones said. “Unless you live in a neighborhood that floods, it’s not a priority to you.”