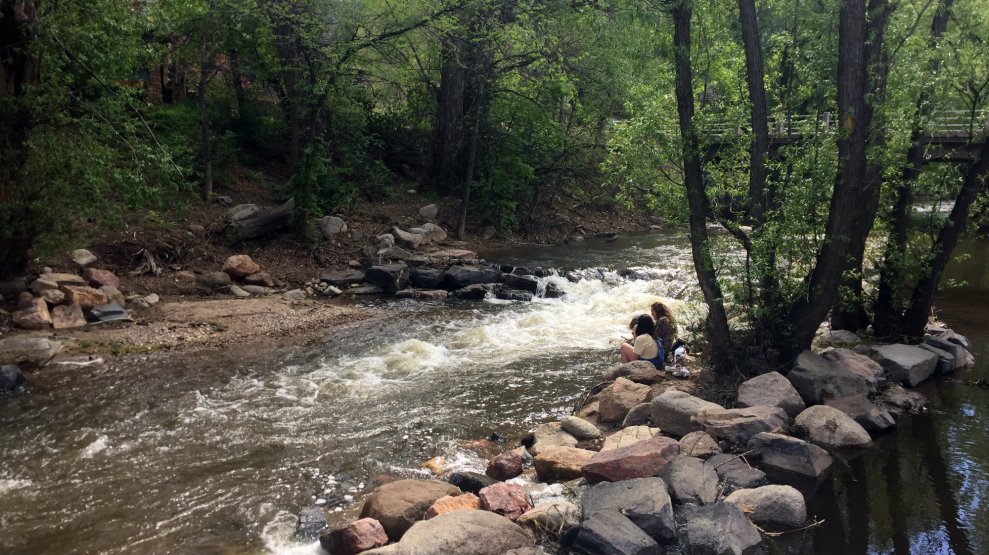 The Fourmile Canyon Fire, sparked by a backyard burn west of Boulder, Colorado, in 2010, caused $220 million in damage and destroyed 168 homes. It also scorched nearly a quarter of a watershed that supplies water to the nearby community of Pine Brook Hills. The problems didn’t end there: Long after the blaze was put out, intense rainstorms periodically washed sediment and other particles downstream, disrupting water treatment and forcing the local water district to stop pulling water from Fourmile Creek, leaving it reliant upon water already collected in its reservoir.

“The water coming down Fourmile Creek would get so dirty that we simply would shut down moving any water (from the creek),” for days or even weeks, says district manager Robert de Haas. “If we hadn’t built the reservoir”—in 2006—“we’d have been in big trouble.”

Now, new research suggests that such water-quality problems might become more frequent across the West. Climate change is already causing a surge in wildfire activity. As a result, scientists expect to see a rise in erosion in most of the region’s watersheds in the coming decades. Sediment and ash running off burned hillsides into streams can clog reservoirs, smother fish and disrupt municipal water supplies.

In many places, however, water managers and other officials are already taking steps to prepare for both wildfire and its long-term aftereffects. For communities that rely on forested drainages for their water, “It is a key aspect of water supply and watershed protection to plan for a wildfire,” says Kate Dunlap, who works on source water protection for the city of Boulder.

In forested watersheds—the source of 65 percent of the West’s water supply—trees, soil and leaf litter soak up precipitation like a sponge, then slowly release it to aquifers, streams and rivers. But wildfires can sear the soil, making it water-repellant, and incinerate stabilizing plant roots. “Then, when it rains, all that water gets transported right off the surface,” ferrying sediment, nutrients and debris downstream, says Jeff Writer, a hydrologist at the University of Colorado Boulder. Sometimes precipitation triggers deadly mudslides that destroy homes and bury highways. Sediment can also shroud streambeds and reservoirs, forcing managers to dredge or conduct other costly fixes.

Floods of sediment and debris can also compromise water supplies. Spikes in nutrients can spark algae blooms, causing taste and odor problems. Small particles can clog filters. When organic matter reacts with treatment chemicals, it can create toxic compounds like chloroform. After the Fourmile Canyon Fire, Pine Brook Water District had to revamp its water treatment process to avert those noxious byproducts. “(These problems) can basically shut the whole plant down,” Writer says, though typically only for short periods of time. Still, the problem highlights the importance of having more than one municipal water source.

One of the lessons of the Fourmile Fire, which Writer and other researchers studied at length, was that both vigilance and patience are required post-fire. The fire occurred in September, leaving a 10-month gap before summer monsoons hit, causing severe erosion. Water managers may need to monitor flood forecasts, rainfall intensity and water quality for months or even years after fires.

“Even though fire is a natural component of (many Western ecosystems), there is a concern about increases in erosion and sedimentation, and increases in fire,” says Joel Sankey, a research geologist with the U.S. Geological Survey in Flagstaff, Arizona. Research he carried out with colleagues suggests that more than a third of Western watersheds could see their sediment load double by 2050, due to climate change and post-fire erosion, putting surface water supply and quality at risk. “There’s an opportunity for communities, watershed managers, to proactively respond to the information,” he says. Many are already doing so. Cities like Flagstaff, Arizona, Boulder and Fort Collins in Colorado, and Santa Fe, New Mexico, are thinning forests, stepping up water monitoring and studying watersheds to identify which areas are most susceptible to erosion.

Federal and local agencies can also reduce the threats to water quality by responding quickly after wildfires occur. Strategies include protecting bare ground with mulch to reduce erosion and building retention ponds to capture sediment before it can clog intake pipes at treatment plants, says Stephanie Kampf, a hydrologist and professor at Colorado State University. When blazes blast through urban areas, as this year’s deadly wildfires in Northern California did, toxic ash and remnants of paint and plastics add to the substances that can be swept downstream. Officials there are using sandbags to keep debris out of storm drains and taking other measures to protect water quality following the fires. “Wildfires are a natural part of the landscape—and they’re inevitable in the Western U.S.,” Kampf says. “I think that preparing for them, to minimize vulnerability to fire, is really the way to go.”