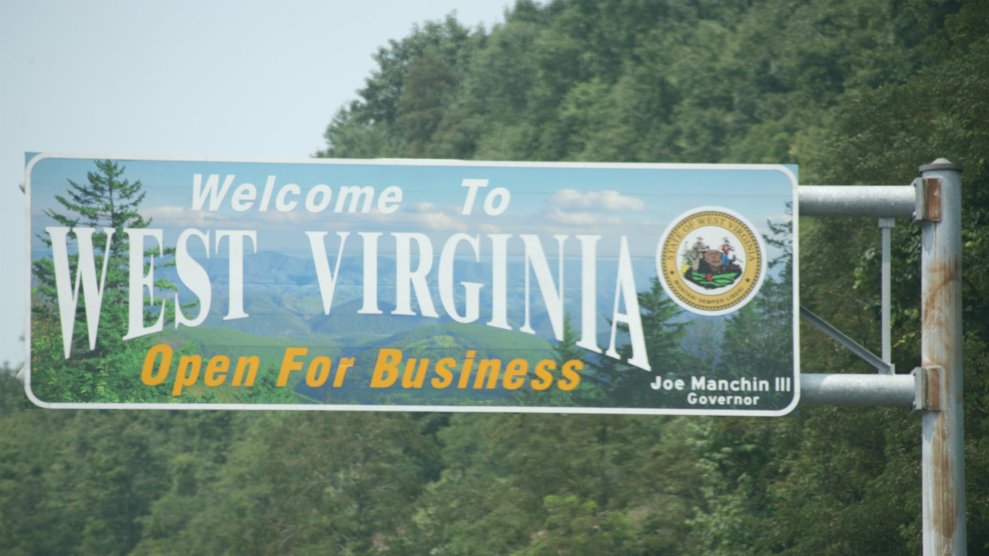 Annetta Coffman can name 35 people in her neighborhood who have recently died from cancer—and that includes her own family. Coffman’s mother died of cancer in 2007, and three years ago her 18-year-old son was diagnosed with cancer. “Every single neighbor I’ve had has died of cancer,” Coffman told Mother Jones.

Coffman lives in Minden, West Virginia, an impossibly small town of roughly 250 people in the heart of Appalachia, where coal mining once made it a thriving community. Now, all that remains are dilapidated homes and toxic waste that residents say is making them sick at an alarming rate. Fayette County, where Minden is located, struggles with high unemployment and poverty; the county of more than 44,000 people had an unemployment rate of nearly 8 percent in 2016, while 19 percent of the population lives in poverty.

The story of Minden is yet another example of how toxic pollution harms the poorest and vulnerable communities the most.

From 1970 to 1984, the Minden-based Shaffer Equipment Company built electrical equipment for the coal industry. Oil that contained polychlorinated biphenyls, or PCBs were used in the transformers and other equipment that was later disposed of into an abandoned mine site in Minden. PCBs, which are highly toxic and have been linked to certain types of cancer, were banned by the Environmental Protection Agency in 1979. But the chemical is stubbornly persistent.

In September 1984, the West Virginia Department of Natural Resources inspected the Shaffer site and found that old equipment dumped at the mine was contaminating the soil at Arbuckle, a nearby creek. The state asked the EPA to come in and investigate. In two separate clean-ups over the course of seven years, a team led by Bob Caron from the regional EPA office removed contaminated soil at the Minden site. The first took place between December 1984 and December 1987, while the second one lasted from November 1990 to January 1991.

One year later, the federal government sued the Shaffer Equipment Company and two other defendants that had disposed of materials at the site in order to recoup the $5 million it lost cleaning up the site—a common practice under these circumstances. There was just one problem: Bob Caron had lied about his credentials. The so-called hazardous waste expert claimed to have a Bachelor of Science degree from Rutgers University in New Jersey and a master’s degree in organic chemistry from Drexel University in Pennsylvania.

Shaffer was able to get the suit dismissed and distrust grew among the remaining Minden residents. A lot of people believed that because Caron was a fraud, “the work he was doing was subpar,” says Richardson. Meanwhile, residents say their health continued to suffer.

“The cap is a band-aid over a bullet wound. Here were are years later, and it’s still toxic.”

In 1997, an arsonist set the remaining building that contained contaminated materials on fire. The EPA returned to do another assessment and the US Army Corps of Engineers designed a cap for the toxic soil and building debris, which was completed in 2002. “The cap is a Band-Aid over a bullet wound,” Brandon Richardson, the founder of Headwaters Defense, a local environmental group, says. “Here we are years later, and it’s still toxic.”

Though residents feel as if the EPA has been ignoring their issues for years,  Roy Seneca, the EPA Region 3 press officer, told Mother Jones that “EPA’s responsibility to Minden is no different than any other city,” which suggests that the agency doesn’t believe it has failed the town.

Coffman began hearing stories about toxic waste issues when she was a young girl in the 1980s, but initially she didn’t give it a second thought. After her mother’s death from uterine, breast, and ovarian cancer in 2007, however, she began to wonder if all the cancer in her community wasn’t just a coincidences. Last year, she created a Facebook page where people can message her about their experiences with cancer in the area. “This isn’t a recent emergency,” Coffman says. “This is long-term neglect.” On the Facebook page, Coffman posts the photos and stories from the loved ones of cancer victims.

This isn’t a recent emergency, this is long-term neglect.”

Today, many people are on edge. Coffman has two nephews, aged 11 and 12, who come to visit her, but because they live so close to Arbuckle Creek,  “I don’t feel comfortable letting them go outside and be normal kids.”

Corman and others in the community began to pressure the EPA to return to their area, and finally, last  June, the agency went back to Minden to do more testing of the Shaffer Equipment site and Arbuckle Creek to determine if further action is required. According to the Fayette Tribune, of the 20 total sites tested, only one was done in the predominantly black neighborhood closest to the contamination site.

That same month, Dr. Hassan Amjad began going door-to-door to do a survey of cancer diagnoses in town. Dr. Amjad, who passed away unexpectedly in August, believed there was a link between the contaminated site and cancers.

Richardson’s environmental group conducted similar surveys. “We counted 110 people in the last four years who have been diagnosed or have died from cancer,” he says.

Still, the numbers seem to reveal a different reality, and residents say they feel slighted when officials tell them they’re not living in a cancer cluster. “It’s hurtful and it’s disappointing,” Coffman says. “I feel like if it was a community with better socioeconomics, it would be looked at differently.”

In October, the EPA announced it had found a “troubling” amount of PCBs at the sites it tested, but more testing needed to be done in order to determine next steps. In an email, Seneca said the agency is “examining the ongoing protection of the cap” placed over the site in 2002 and will “conduct cleanup” if any EPA sampling warrants it.

Meanwhile, Minden residents have been lobbying to be put on the EPA’s Superfund National Priorities List. Superfund is a program that identifies and cleans up toxic sites around the country. West Virginia currently has 10 such sites, but in order to be added to the list, the EPA must decide if the site is eligible and the state of West Virginia must agree with the listing. “Those events have not occurred,” Seneca said. “They may in the future.”

Since being appointed, EPA head Scott Pruitt has angered environmentalists with his broad attempts to roll back regulations designed to protect humans and the environment. But he has said cleaning up toxic sites are one of his main priorities.

Community members have also asked Republican Gov. Jim Justice to help move the residents of the entire town to another area. “Minden is so toxic,” Richardson says, “the majority of people want to leave.”

“Minden is so toxic,” Richardson says, “the majority of people want to leave.”

Relocating residents of toxic communities is not without precedent. Mossville, Louisiana, a historically black town in the state’s heavily polluted area known as Cancer Alley, faced its own potential demise in 2014, after a massive chemical plant sought to expand. The South African company polluted the air, water, and soil and made the overwhelming majority of residents fall ill with central nervous system disorders. By 2015, nearly all the residents had taken buyouts and moved away.

And that’s what Coffman wants for her community. “I love our community,” Coffman says. “I love the neighbors I’ve known since I was a little girl.” But still, she can’t fathom staying in her hometown for much longer. “I don’t want to wonder if I’m going to be the next person who gets cancer.”