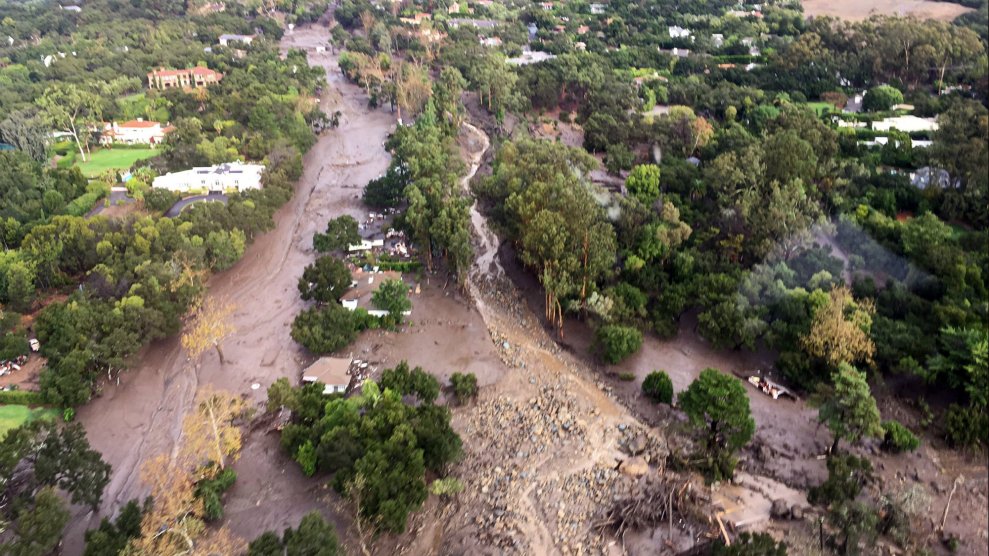 California is often the first state in the West to test new solutions to social and environmental problems. These days, the state is at the fore of a much more ambitious challenge, as it finds its progressive ideals—and its increasingly diverse citizenry—in frequent opposition to the policies of President Donald Trump. Every month, in the Letter from California, HCN chronicles efforts in the state to grapple with its role in the changing, modern West.

It takes two hours to drive along the coast from Los Angeles to Montecito, California. On a sunny day (of which there are, on average, 284 a year, according to the National Climatic Data Center), the Pacific Ocean glistens to your left as you head north, away from the city’s hubbub, past fields and picturesque beach towns until you reach the secluded hills of eastern Santa Barbara County.

If you can afford it, the unincorporated community of Montecito offers many things that Los Angeles doesn’t: open space, tree cover, seclusion. Its low crime rate and well-maintained infrastructure go hand-in-hand with its status as one of the country’s most expensive zip codes. Almost three-fourths of Montecito’s majority-white population lives in homes they own.

Montecito seems like an unlikely site for a violent disaster. But last December’s Thomas wildfire destroyed nearly 300,000 acres nearby, forcing 100,000 people to evacuate. Heavy rains followed within weeks, turning the scenic hills into a post-apocalyptic landscape. A wall of mud and debris thundered down, killing at least 21 people and destroying an estimated 75 homes.

The news was shocking. We’re not used to seeing the well-to-do as victims of natural catastrophes, as if they and their neighborhoods should be exempt by virtue of their economic power—as if life inside a well-constructed, gated compound guarantees security. But in this era of manmade climate change—as California’s rapid development collides with drought, fires, torrential rains—that illusion no longer holds. These disasters affect everyone eventually. Yet it’s when we try to recover from them that our class differences become starkest.

According to the U.S. Geological Survey, landslides happen in rich and poor neighborhoods alike, killing up to 50 people a year across the country. That’s because of the popularity of hilltop houses in the U.S. In much of the developing world, the urban poor are forced to live in overcrowded and eroded hilltops in cities like my native Caracas, Venezuela. But in the American West, hills offer the best views and most coveted real estate.

In much of the developing world, the urban poor are forced to live in overcrowded and eroded hilltops in cities like my native Caracas, Venezuela. But in the American West, hills offer the best views and most coveted real estate.

They also often host the biggest homes, though the risks of hilltop mansions are widely known. In fact, following the Thomas wildfire last December, the USGS warned of potential landslides in Montecito’s alluvial fans, places where sediment fans out from mountaintops towards the valleys.

Yet development on alluvial fans remains widespread in Southern California. For example, in the San Bernardino Valley, a four-hour drive east of Montecito, more than 500,000 new housing development projects were built atop alluvial fans between 2000 and 2006. In 2003, a local mudslide killed 16 people. “Every time there is a major flood event, we have task forces and we do studies,” Susan Lien Longville, chairwoman of the San Bernardino Valley Municipal Water District, told E&E News in January. But the findings are ignored.

“The Montecito case shows us that we—all of us, regardless of class or race—are at some level of risk,” Julie Maldonado, who teaches a class called “Risks, Vulnerability, Resilience, Disasters” at the University of California Santa Barbara’s Department of Environmental Studies, told me. “The impacts of climate change do not discriminate in the sense of whether they affect you or not, but to what extent? And what do the impacts mean not just to your survival, but to your overall wellbeing?”

Even before the fires and landslides, Montecito was in the midst of a slow-moving climate dilemma. It’s built on land without much access to water. Every semester, Maldonado invites local water resource engineers to explain how the struggle over natural resources affects this otherwise wealthy enclave. Often, guest speakers mention Oprah Winfrey’s 40-acre estate, the second biggest water user in Santa Barbara County, with an annual water bill of up to $125,000.

Still, their money helps the rich survive their troubles. They can usually rebuild or find medical help as needed. Maldonado points out that the recent fires and landslides affected a much wider range and diversity of people: Members of the Santa Ynez Band of Chumash Mission Indians, who were displaced by the fires, had to fight the flames to preserve their cultural sites. And roughly a third of those killed in the landslides came from immigrant families employed in local service jobs. The domestic laborers, teachers, and small business owners who cater to the wealthy community of 9,000 cannot escape the fallout from these twin tragedies.

The recovery from this natural disaster will be much harder for the less-visible, low-income residents of Montecito. They have fewer options than their wealthier counterparts do.

“We tend to focus on the extremes, but the vast majority of people live on that margin where they pay their rent this month, and all it takes is one bad incident to not be able to pay it the next,” says Maldonado. “That’s how disasters often affect people.”