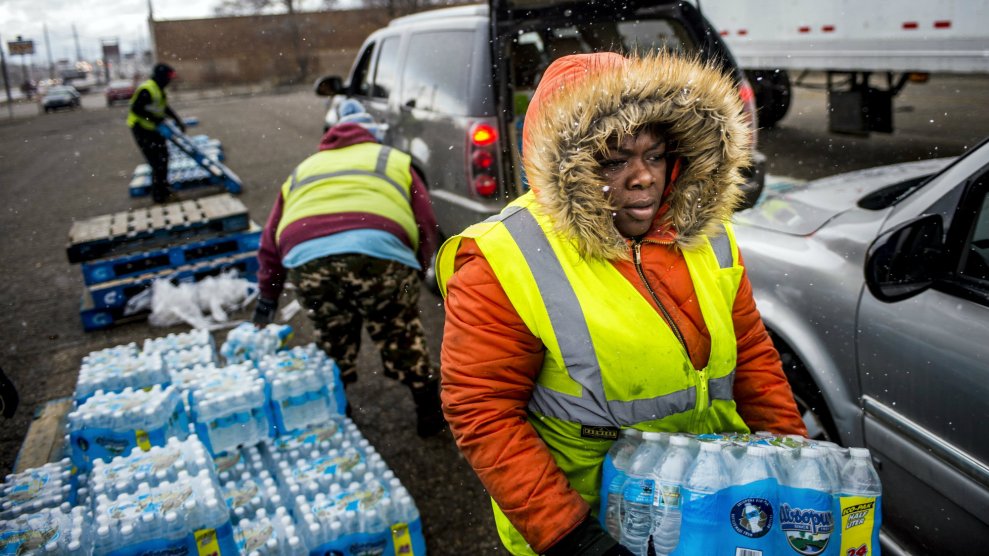 Four years ago, the city of Flint changed its water source from Lake Huron to the Flint River. Almost immediately, foul-smelling, discolored water began coming out of city taps. For almost two years, the mostly low-income and black residents were left to cook, drink, and bathe in water that was contaminated with lead. The crisis led to criminal charges leveled at more than a dozen state and city officials, thousands of children with dangerous levels of lead in their bloodstreams, and the collapse of confidence between residents and their government.

Now, at the fourth anniversary of the water crisis, state and city officials say the crisis has ended and Flint’s water is safe to drink. But residents aren’t buying it.

“Flint residents have had a long journey that started with betrayal by all levels of government,” Marc Edwards, a scientist and Virginia Tech professor who was among the first to confirm Flint’s residents’ fear about their water. “It’s understandable that they’re not going to trust anyone.”

During the crisis, one resident’s water had 397 parts per billion of lead. There is no safe level of lead for children, but the federal limit of lead in water is 15 parts per billion. As part of a $450 million federal and state aid package, Flint residents were able to receive free bottles of water for cooking, drinking, and bathing at various water distribution centers. By the end of 2016, more than two years after the crisis began, lead levels in the city had finally fallen to 12 ppb. “There are several hundred million dollars used in Flint to improve the water system, and we’re starting to see those benefits,” Edwards says. “It’s better than many of its peer cities, but the trust issue is real.”

So, earlier this month, Republican Gov. Rick Snyder announced that the bottled water program would be ending once the distribution centers ran out. “We have worked diligently to restore the water quality,” he said, “and the scientific data now proves the water system is stable and the need for bottled water has ended.”

But for residents, that reassurance meant nothing. Ariana Hawk, a Flint resident whose children developed rashes after bathing in the water, told WJRT, an ABC affiliate, shortly after Snyder’s announcement, “I don’t trust the filter, I don’t trust the water. Everything that me and my kids do from cooking to boiling their water for a bath, we’re using bottled water, I do not trust anything.”

Her lack of trust has deep roots. The crisis began because the water from the Flint River wasn’t treated properly, so it leached lead off old lead pipes fitted in homes across the city. After nearly two years of complaints from people living in the city and denials from state and city officials, an emergency was declared and Michigan attorney general Bill Schuette opened an investigation into the crisis. By the time the water was switched back to Lake Huron in 2015, thousands of children’s blood registered high levels of lead and at least 12 people were dead from a Legionnaires’ disease outbreak related to the water switch. Schuette has charged more than a dozen officials with crimes, including Nick Lyon, the head of the state’s Department of Health and Human Services, accused of involuntary manslaughter for the death of an elderly man in 2015.

“The data we’ve collected is now not in disagreement with the state showing that Flint is in the range of federal standards. But that doesn’t mean its safe.”

Edwards notes that worried residents may have a point. “The data we’ve collected is now not in disagreement with the state showing that Flint is in the range of federal standards,” Edwards explains, “But that doesn’t mean its safe.” While lead service lines, the pipe that connects homes to municipal water sources, are a big source of contamination, Edwards explains that there are others that are inside the home and not owned by the government, including the glue that’s used to hold pipes together and galvanized steel pipes, which can contain lead in the coating. “It’s a risk in any old city with lead pipes,” he says.

Through the Flint Action and Sustainability Team Start program, an initiative funded by the state and federal government, officials are aiming to replace the 18,000 lead service lines across the city. As of December 2017, more than 6,000 pipes have been replaced.

Dr. Mona Hanna-Attisha thinks the city should end the bottled-water service only when lead service lines can be replaced—which isn’t expected to happen until 2020.

Until all lead pipes are replaced, state should make available bottled water and filters to Flint residents.#FlintWaterCrisis https://t.co/z1gNVaDGXS

The Flint water crisis is playing a prominent role in the race for the governor’s mansion. Schuette, who is overseeing the charges related to the Flint disaster, has tried to distance himself from Gov. Snyder and his lieutenant governor, Brian Calley, who is the other top Republican in the race. As I previously reported, some see Schuette’s charges as an attempt to jockey for position in a close race:

The investigation has led to an increasingly tense relationship with Snyder. A particular point of contention has been Schuette’s prosecution of Lyon, a Snyder appointee who is the highest-ranking official to be charged in relation to the water crisis. Calley has accused Schuette of using the high-profile charges to exploit the Flint tragedy. “I don’t see how there can be any shadow of doubt that the process that [Schuette] has carried out has been highly politicized,” Calley said in November, according to the Detroit Free Press.

That’s a concern that has been echoed by some Flint residents, as well. “It’s political grandstanding,” says Nayyirah Shariff, a longtime activist with the Flint Democracy Defense League. She argues that the attorney general didn’t act until national media attention forced him to get involved.

Flint now has one of the best researched water systems in the country. But overcoming the well-deserved trust issue may be nearly impossible. Debra Coleman, a Flint resident, told WNEM, a CBS affiliate, “Point blank. I don’t trust the water. It could be five years from now, and I’ll still never drink this water.”