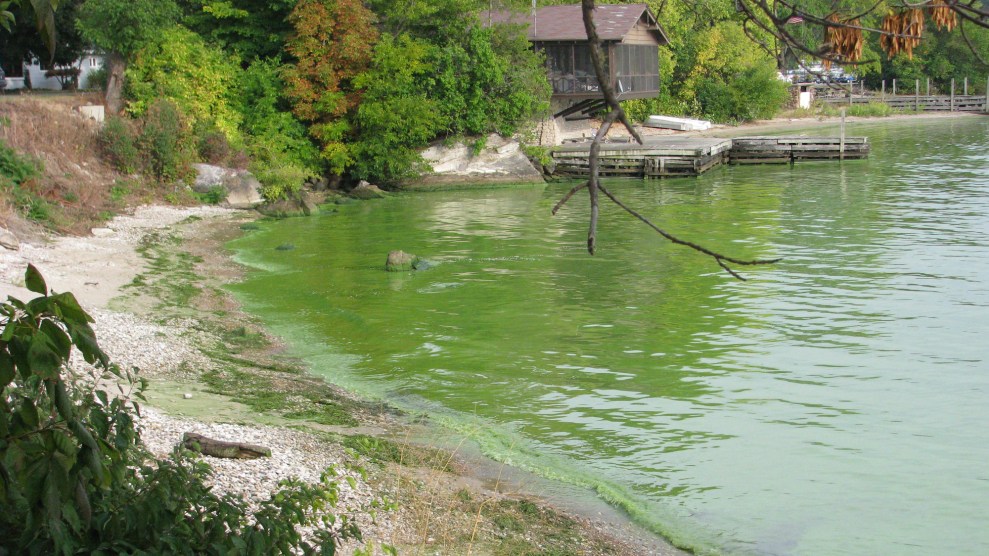 Every summer, a massive green-algae blob colonizes western Lake Erie. Last year’s bloom ranked among the biggest ever, blanketing 700 square miles—an area 1.5 times bigger than Los Angeles. The shoreline of Toledo, Ohio, “smelled like a sewer,” according to one reporter.

These fetid growths appear on lakes throughout the country and world. They’re known as “harmful algal blooms” because they generate toxins called microcystins, which when ingested cause nausea, vomiting, diarrhea, severe headaches, fever, and liver damage. “Pets and livestock have died from drinking water contaminated with microcystins,” the US Environmental Protection Agency reports. In the summer of 2014, the city of Toledo, which draws its water from the western end of Erie, had to warn residents not to drink or even bathe in tap water for days after it became tainted with microcystins. (The city has launched a $500 million project to upgrade its water-filtration system, partially in response to the microcystin threat.)

Algae-riddled lakes are much bigger emitters of the potent gas methane than was previously known.

Where do these green blobs come from? In short, we create them. In land upstream from the lake, farmers apply phosphorus as fertilizer for their corn and soybean crops. Every year, a portion of it leeches into the lake, where it fertilizes algae instead—a process called eutrophication. While Erie’s west-side drainage basin has been planted in millions of acres of farmland for decades, the state’s regulators have documented that the amount of biologically active phosphorus entering the lake each year spiked in the 1990s and has remained high ever since. The reason may be linked to the boom in no-till soybean farming that started in the 90s, as a 2017 paper by researchers from the National Center for Water Quality Research suggests

Poisoned water is only one of the consequences of the excess farm fertilizer that ends up in lakes. Another is accelerated climate change. A new paper—by a team that includes researchers from the EPA and the University of Minnesota—finds that algae-riddled lakes are much bigger emitters of the potent gas methane than was previously known. Methane is a greenhouse gas with about 30 times the heat-trapping effect of carbon.

All told, they found, methane from the world’s lakes emits methane equivalent in greenhouse effect to about 20 percent of all the carbon dioxide from fossil fuels burned globally—about twice the level of previous assumptions. And they directly tied these emissions to algae blooms. “The greener or more eutrophic these water bodies become, the more methane is emitted, which exacerbates climate warming,” the study’s lead author, University of Geneva researcher Tonya DelSontro, said in a press release. The paper found that even modest increases in eutrophication over the past century could add methane to the atmosphere equivalent in greenhouse gas terms to 13 percent of the world’s current fossil fuel combustion.

Meanwhile, last week, after years of pushing for voluntary solutions to Lake Erie’s algae woes, the Ohio EPA declared Lake Erie “impaired”—a move advocates hope will eventually lead to regulations that slow the flow of algae-feeding fertilizer into the lake. The state has established a goal of reducing phosphorus flows by 40 percent by 2024; in a report released Monday, the agency acknowledged that the state’s policies “haven’t moved the needle” on runoff reduction, despite “significant taxpayer and private dollars spent on incentives and voluntary nutrient reduction programs.” I have more on agriculture’s role in the plight of Lake Erie here and here.