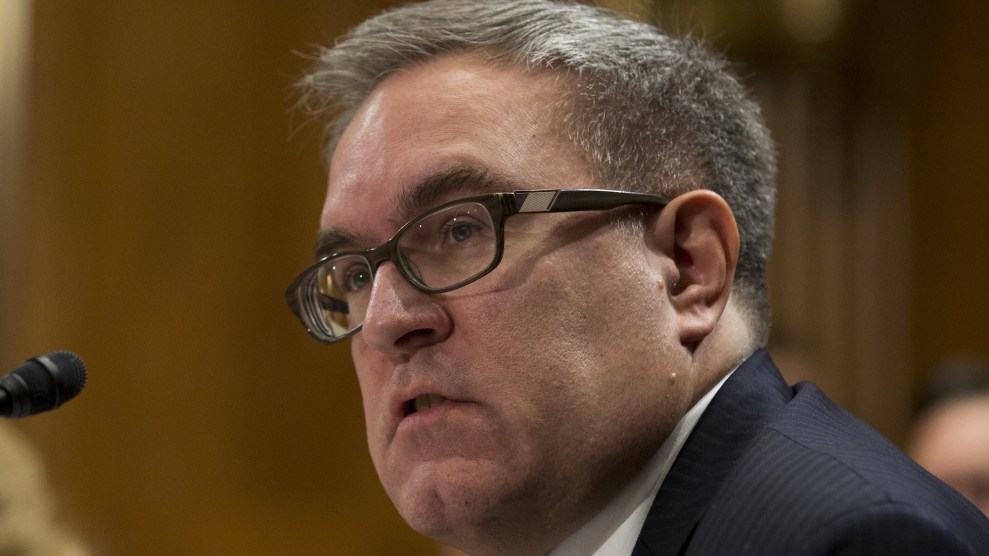 The fossil fuel industry now has yet another ally at the Environmental Protection Agency—one who would almost certainly take over as head of the agency if Scott Pruitt is forced to resign. In a 53-45 vote on Thursday, the Senate confirmed Andrew Wheeler—a coal lobbyist who once worked for DC’s  most notorious climate change denier—for the EPA’s second-most powerful position.

After lengthy delays following Wheeler’s confirmation hearing in the fall, the Senate Environment and Public Works Committee voted in favor of Wheeler in a party-line vote in February. The full Senate took up the nomination this week just as some Democrats and environmentalists unsuccessfully called for a delay so he could be more thoroughly vetted as a potential successor for Pruitt.

Having Wheeler run the EPA is like “having a tobacco lobbyist heading up the American Lung Association.”

Wheeler will join the EPA amid a long string of revelations that have sharpened congressional and White House scrutiny of Pruitt—controversies related to the administrator’s spending and travel habits and allegations that he retaliated against EPA staff who questioned his activities.

As deputy administrator—a powerful, if somewhat low-profile position—Wheeler will be responsible for implementing Pruitt’s vision. Wheeler is likely to have a hand in making appointments, overseeing operations, and working with regional and state agencies. “He would have a lot of opportunity to do long-term damage on the personnel front,” says Bruce Buckheit, a consultant who was the EPA’s head of air pollution enforcement during the Clinton administration.

In addition to his work on Capitol Hill for the climate-denying Sen. James Inhofe (R-Okla.), Wheeler has lobbied for the coal company Murray Energy. Bob Murray, the company’s CEO, is an outspoken Trump donor who has battled against efforts to reduce greenhouse gas emissions. In Wheeler’s time with the firm Faegre Baker Daniels, he also lobbied on behalf of the uranium mining company Energy Fuels Resources, the utility Xcel Energy, the biofuel firm Growth Energy, and the liquified natural gas company Bear Head LNG.

Bob Murray has been one of the most aggressive advocates for the EPA to review its endangerment finding. This finding, which forms the scientific basis for the EPA’s regulatory climate work, considers greenhouse gasses a public health threat. Shortly after Trump was inaugurated, Murray provided the administration a policy wish list in which rescinding the endangerment was a top priority. Wheeler admitted in his confirmation hearing that he was handed the same list (Wheeler was still lobbying on behalf of the company as recently as summer 2017).

Early in his career, Wheeler spent four years at the EPA during the George H.W. Bush and Clinton administrations. Afterward, he spent 14 years in the Senate working for Senator James Inhofe and his Environmental Public and Works Committee. (Inhofe is the author of a book on climate change entitled The Greatest Hoax: How the Global Warming Conspiracy Threatens Your Future.) As Wheeler’s own biography states, he worked on “greenhouse gas emissions legislation, the Energy Policy Act of 2005, the Energy Independence and Security Act of 2007, the Clear Skies Act and the Clean Air Interstate Rule”—but he omits that Inhofe’s staff often worked to undermine greenhouse gas regulation. According to Huffington Post‘s Alexander C. Kaufman, Wheeler cultivated a reputation as a “bully” for peppering environmental regulators with what they said were politically motivated congressional probes.

Wheeler takes after his former bosses. In 2010, he wrote that a controversy where climate scientists’ emails were hacked proved that the EPA’s climate endangerment finding should be reconsidered. “While the [Obama] Administration and their allies have tried to downplay this fact over the last few weeks, the fact is that this undermines their legal position as the Endangerment Finding is challenged in the courts.” And when Wheeler appeared before the Senate Environmental and Public Works Committee last fall, he misrepresented the scientific consensus about human contribution to climate change. “I believe that man has an impact on the climate, but what’s not completely understood is what the impact is,” he told the committee.

If Pruitt were to leave the EPA, Wheeler would be next in line to become acting administrator. Even if Wheeler were to rein in some of the agency’s questionable expenditures, it’s unlikely that his policies will depart from Pruitt’s deregulatory agenda.

Having Wheeler run the EPA is like “having a tobacco lobbyist heading up the American Lung Association,” Judith Enck, an Obama-era EPA official, told me.