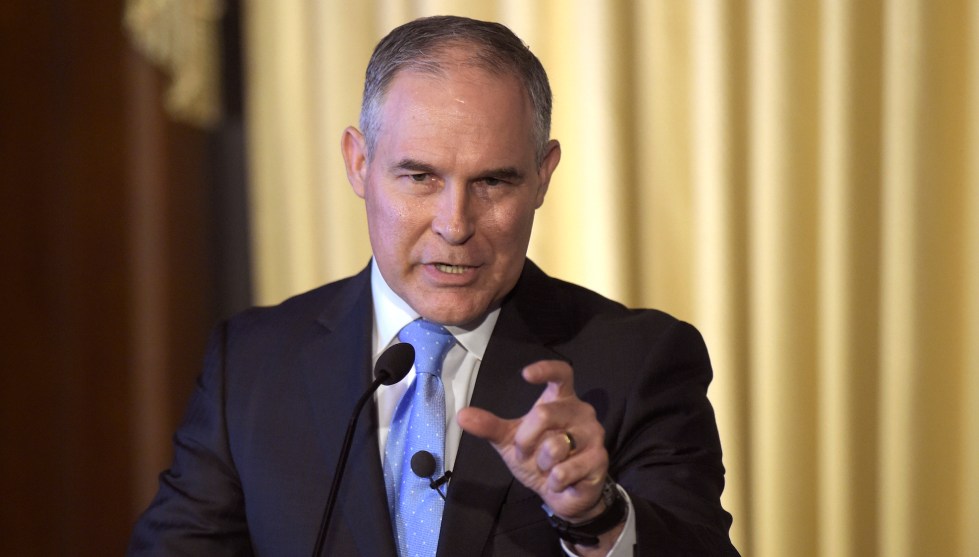 Adopting a strategy successfully employed by the tobacco industry, Environmental Protection Agency Administrator Scott Pruitt announced a sweeping new regulation that would restrict the kinds of scientific studies the agency can use in developing its regulations.

The EPA administrator, who has come under fire from both parties for his personal conduct and ethical scandals, announced the changes at an EPA event Tuesday, where he was surrounded by conservative allies and pollution skeptics. “I know many of you here have supported this through a number of years,” he told his audience, which did not include any reporters.

For years, EPA critics have pushed Congress to forbid the agency from relying on the studies that comprise the bulk of the independent research on fossil fuels on public health. Their strategy aims to sow doubt about the health effects of air pollution, while slowing down or weakening future rules targeting particulate matter and ozone. The proposed rule is modeled after bills introduced by Rep. Lamar Smith (R-Texas) in the House, which Pruitt described as the “codification of an approach.”

The centerpiece proposal—restricting the EPA’s use of the best available science in crafting policy—has been tried before. The tobacco industry laid out its strategy to combat “secret science” in the EPA’s work to rein in cigarette smoke in a 1996 memo, according to The Intercept, claiming that it was impossible to know the accuracy of studies in which the researcher didn’t make all their raw data public. The fossil fuel industry later borrowed the same strategy in an attempt to undermine the landmark 1993 Harvard “Six Cities” public health study on air pollution.

Many scientists note that, in practice, the policy will prove to be unworkable. It would drastically limit the kinds of studies available to regulators crafting the agency’s air and water regulations, because many of these studies rely on sensitive medical records that cannot be made public, or may be owned by private institutions not keen on publishing proprietary information.

“The irony is whenever the industry does these studies from their own angle, do they reveal all the data? No. It becomes this very disingenuous cry of someone playing dirty.”

The EPA’s critics “are forever trying to cut this data and saying the broad scientific community aren’t giving them all the information they need to disprove this data,” says Dan Costa, former director of the EPA’s Air, Climate, and Energy Research Program, who recently retired. “The irony is whenever the industry does these studies from their own angle, do they reveal all the data? No. It becomes this very disingenuous cry of someone playing dirty.”

According to emails obtained by the Union of Concerned Scientists through FOIA requests, Nancy Beck, a top political appointee at the agency, had noted her concern about this approach in January to Richard Yamada, the top political appointee in the Office of Research and Development. She suggested that industry studies also would be affected by the changes. “Such a requirement would be incredibly burdensome,” she wrote, “not practical.”

The proposed rule that will be published in the Federal Register appears to get around this obstacle for industry studies by granting Pruitt the power to personally decide what exemptions can be made. The generous carveout allows the “Administrator to exempt significant regulatory decisions on a case-by-case basis if he or she determines that compliance is impracticable because it is not feasible…”

Once implemented, the rule would have a far-reaching impact on the agency’s future policymaking and its rules on lead in drinking water and air pollution. For example, the agency is due to review regulations on particulate matter small enough to lodge into the lungs and cause serious health problems. “This is very transparently a way to attack the ozone and particulate matter standards,” Gretchen Goldman, lead analyst with the Union of Concerned Scientists says. “It’s written very prescriptively, focused on getting down to the inconvenient studies for those being regulated.” Every five years the EPA is supposed to assess the best available science on ozone and particulate matter and decide action from there, but with this policy in place, the work would either be slowed down to a crawl as researchers try to obtain the raw data, or it would end up being based on a skewed sample of studies.

For the “Secret Science Reform” bill introduced by Rep. Smith in 2014, the Congressional Budget Office estimated the implementation costs would be $250 million a year—half of the Office of Research and Development’s research budget. Though the EPA proposal is not as far-reaching, applying to economically significant regulations only, it is still burdensome for a cash-strapped agency. The CBO report estimated the cost would go up $10,000 to $30,000 for each study the agency uses; one way it suggests reducing costs is for the EPA to rely on “significantly fewer studies each year in support of its mission.”

The most effective way Pruitt can hollow out the EPA, besides gutting its staff, is to attack the heart of how the agency uses and studies science—the bedrock of the EPA’s work. And he’s taken aim at science in other ways, as he highlighted in Tuesday’s speech, such as changing the composition of the agency’s independent science advisory boards. He claimed that he was removing advisers because they had a “conflict of interest” because they received EPA grants. But by removing them, he paved the way for more industry-sympathetic views on the boards that are designed to serve as an independent check on the agency’s science.

Tuesday’s move advances that goal. Joseph Goffman, a former EPA attorney who is now director of the Harvard Environmental Law program, told me he was especially struck by “how transparent Pruitt is about rigging the process: Rigging the membership of the science boards, rigging the range of studies that will be incorporated in agency decision-making. And in both cases [he’s] excluding sources of information or expertise that would lead to outcomes that Pruitt doesn’t prefer.”

Goffman thinks Pruitt’s predecessors never went as far as Pruitt to change the agency’s internal processes to suit their political purposes. “He’s changing the internal rules of the game by which [the] EPA plays in order to rig it.”