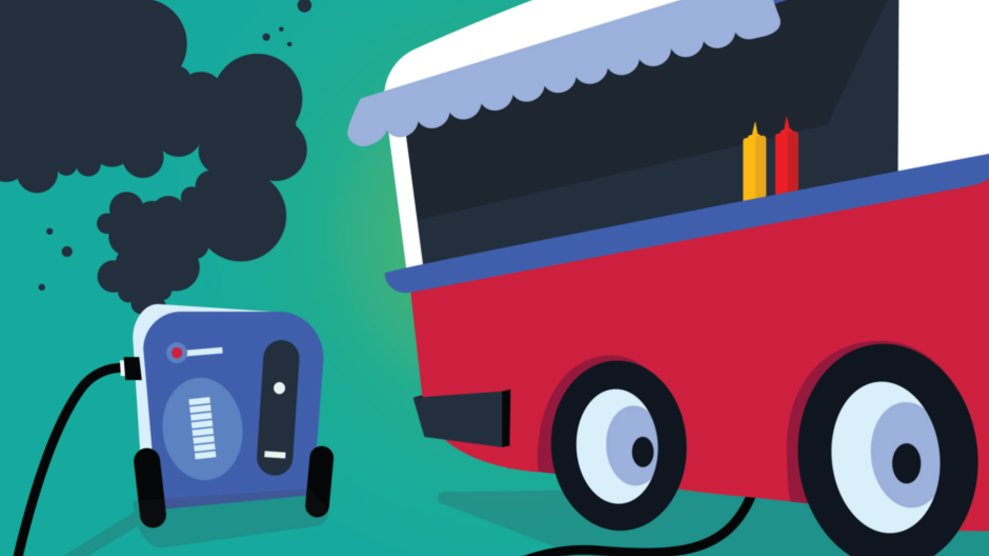 Much of that activity runs on mobile generators, many of which burn diesel fuel to make electricity. Burning diesel also creates air pollutants like particulate matter and nitrogen oxides. So could the power source behind your favorite summer event be poisoning the city’s air?

The short answer is: probably not too much.

Max Zhang, an engineering professor at Cornell University, has studied air pollution from diesel generators. In general, he said, diesel generators have an outsized impact on pollution compared to other sources of power: “Basically, they tend to be dirtier per unit of energy provided.”

“Basically, they tend to be dirtier per unit of energy provided.”

Where and when festivals and food trucks run their diesel generators can also be a problem, according to Zhang. The nitrogen oxides that generators emit combine with other compounds in the presence of sunlight to form ozone, a potent trigger for asthma attacks and other health problems. A sunny summer afternoon is prime time for that kind of air pollution—and that’s exactly when you’re most likely to attend a generator-powered event like a street fair or a block party.

Zhang’s research focuses on large diesel engines, such as those that provide backup power to buildings. As for the smaller units, “they’re so small, they typically aren’t regulated very much,” he said.

In New York City, for example, the fire department and the Department of Environmental Protection each require permits for generators producing at least 40 kilowatts—far larger than those used on food trucks or small outdoor concerts, which might generate anywhere from five to 20 kilowatts.

The U.S. Environmental Protection Agency, however, does have rules governing pollutants from what it calls nonroad diesel and gasoline engines, or generators. If a company gets caught selling generators that don’t meet emissions standards, EPA can fine them as much as $44,000 per dirty device sold. In 2014, the agency tightened its air emissions standards on mobile generators. Since then, the stricter regulations have been phased in, with a final deadline of December 31, 2018.

“Basically, the onus [to comply] is on the manufacturer,” said Joe Runnels, director of sales at Power Tech Generators in Florida. “We have to keep a very detailed log of what we sell and where.”

According to Runnels, festival-goers and pedestrians shouldn’t be worried about breathing the air around any new generator sold in the last four years. “Being at a food-truck round-up would be no more detrimental to your health than standing next to a crosswalk before you cross the street,” he said.

But what if a festival or food truck is using an older generator that predates the EPA’s 2014 standards?

Runnels said most small generators don’t last that long. “Especially in the food-truck industry, because they put so many hours on their generators, they could run up in excess of 3,000 hours a year”—more than enough to wear out a small unit, even if it’s properly maintained.

People in the industry acknowledge that some businesses are running outdated equipment or cheaper (and dirtier) generators that aren’t intended for use around crowds of people.“We’ve all talked about it,” said Matt Geller, president of the National Food Truck Association. “The first step is recognizing you have a problem.”

Some food-truck proprietors have turned to cleaner-burning propane, in part to cut down on pollution. And at least one food-truck manufacturer is experimenting with a solar-powered rig. But so far, those alternatives are few and far between, according to Geller, who estimated that “a majority” of food-truck operators use diesel generators.

“I would love to see a private company come into this space and say, ‘There’s a problem here,’” Geller said.

Richard Gomez is a customer sales engineer and plant controller at one of the country’s largest food-truck manufacturers, AA Cater Truck in Los Angeles. He said his company has sold 10 trucks outfitted with solar panels and battery systems, as well as LED lights to reduce energy consumption.

“We can’t keep up with the demand,” Gomez said. “Every [solar] truck that I’m building is being sold.”

The food-truck business has matured over the past 10 years, but so has the design of diesel and gasoline generators. Trucks and generators have also gotten more expensive.

Runnels’ company sells low-speed, liquid-cooled, less-polluting generators that can cost more than $10,000—twice what some older models might cost. That used to be out of reach for truck operators, he said, but it’s become a major market for the company in recent years.

“Eight years ago we all said, ‘Jeez, how many grilled cheese sandwiches do you have to sell to buy a Power Tech?’” Since then, he went on, “I’ve seen a big change in the industry. You’re seeing more professional, corporate, brick-and-mortar restaurants get into it.”

There may be another reason, apart from air emissions, for food-truck operators to opt for the newer, cleaner models over old clunkers: They’re quieter.

Environmental and noise concerns are influencing the organizers of generator-powered events. The St. Louis Earth Day Festival boaststhat its propane-powered generators “produce nearly 75 percent less emissions compared to standard diesel generators.” The Minneapolis Monarch Festival requires vendors to use state-approved generators and to either muffle them or place them 100 feet away to reduce noise.

Gomez, of the food-truck manufacturer, is banking on a major shift in his industry away from noisy, gas-guzzling generators.

“I think the future is solar panels,” he said.