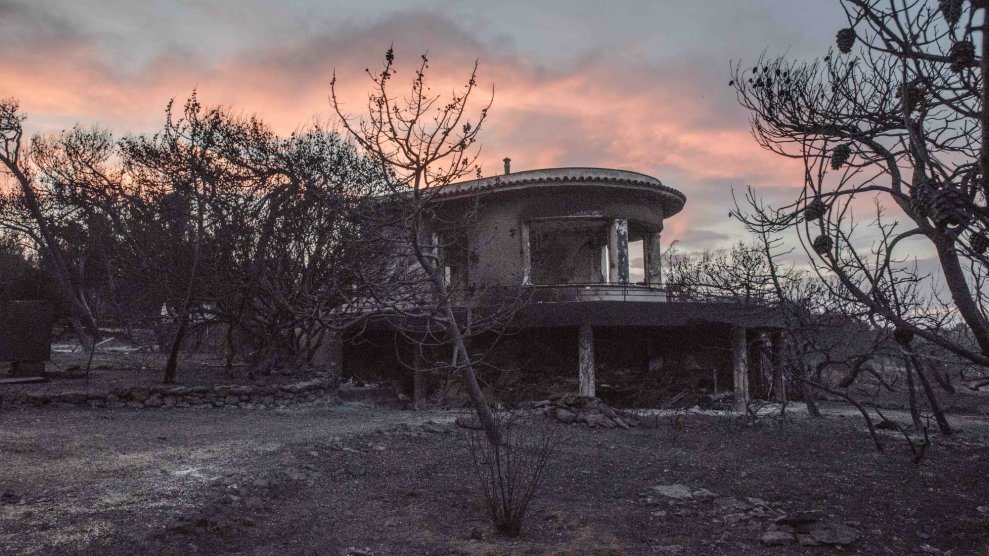 The point where 26 charred bodies were found following a deadly forest fire in Mati, a northeast suburb of Athens, GreeceDimitris Lampropoulos/NurPhoto/ZUMA Press

This story was originally published by CityLab. It appears here as part of the Climate Desk collaboration.

After forest fires raging since Monday killed at least 74 people in the region just north of Athens, the Greek government declared a state of emergency in the province of Attica today. Caused by especially hot and dry summer weather, details emerging from the disaster are horrific—notably the discovery of the bodies of 26 people, including children, who were trapped in the seaside resort of Mati while trying to escape the flames.

The severity of the situation has been greeted with shock in Athens, whose skies have darkened to a haze as smoke blows across the region. But it has not necessarily been met with surprise: Large swaths of Europe have been frying during a record-breaking heat wave.

While Greece’s experience has been the most lethal, farther north is actually where the hot weather has been most unprecedented, part of a string of broken records stretching as far back as early June. Sweden is experiencing its hottest July in at least 260 years, while Northern Ireland and Wales—typically an especially fresh, rainy fringe to the already fresh and rainy British Isles—experienced their hottest June temperatures on record. This stretch of hot weather doesn’t have an end in sight just yet, with highs expected to reach far past 90 degrees across large sections of northern Europe during the next week.

Unusual heat represents a particular public health danger in northern European cities, many of which are ill-equipped to deal with its effects. The average July high in Stockholm, for example, is usually 74 degrees Fahrenheit; this week, temperatures will crest 90, and there are 21 wildfires currently blazing across Sweden during its worst drought in 74 years. Some municipalities have resorted to sending leaflets to older residents to give them tips on how to manage the heat. Hospitals are shipping in otherwise rarely needed air conditioning units. Swimmers might be tempted to cool off in the city’s many waterways, but hot weather has caused giant algae blooms to appear within the Stockholm archipelago, making the water unhealthy to swim in.

Located away from the coast on the European mainland, Berlin is used to higher summer temperatures than Sweden. But here too the heat is posing problems. Daily highs are already past 90, and the mercury is predicted to push above 97 next week—dangerous for the elderly and young children in a region whose large-windowed, non-air-conditioned buildings are not designed to stand sustained, extreme heat. In the countryside surrounding the city, meanwhile, livestock are being slaughtered as the dried, yellowed grass proves insufficient to feed them. (A minor but uniquely German twist to the crisis: According to newspaper Berliner Zeitung, beer stocks are falling. German breweries bottle much of their product in returned bottles, and for some hard-to-fathom reason the prolonged heat has seen that supply dwindle.)

In the United Kingdom, severe dry conditions have also fed wildfires. Earlier this month, a large section of the grassy meadows at Wanstead Flats, on London’s eastern edge, burnt to ash—only to reignite again during another fire yesterday. This summer, parts of the London region have received only 6 percent of their normal rainfall, leaving parks brown and reservoirs dry.

Awareness of the dangers of urban heat is higher in Paris, where a heat wave caused thousands of deaths across France in 2003. The city has announced a heat alert at level three of a possible four. This means 8,000 people deemed vulnerable to extreme heat will be contacted by authorities and supervised by a heat watch team if found to be under stress.

In Britain, many are comparing this to the heat wave of 1976—a weather event so intense that it’s been partly held responsible for germinating the British punk movement. A quick comparison of 1976 and now, however, shows how much more alarming the current conditions are. That ’76 hot spell was confined to pockets of northern Europe and North America, while this year’s map looks as if the whole world is bubbling on a stove. It’s yet another sign that the dangers of a changing climate, which to many appeared as a series of somewhat abstract concerns about melting glaciers in distant parts of the globe, are becoming more difficult to ignore.