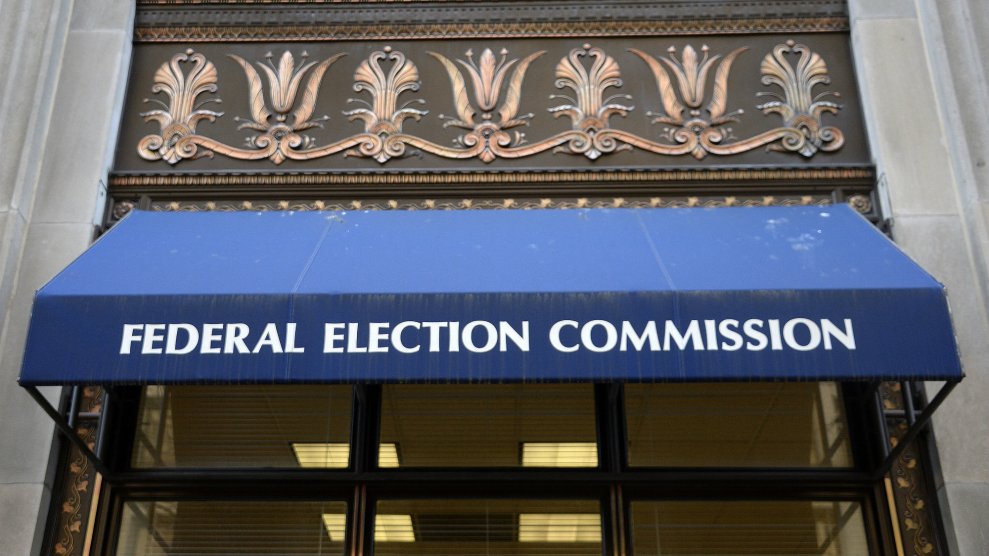 This story was originally published by the Center for Public Integrity and appears here as part of the Climate Desk collaboration.

Several Federal Election Commission employees are concerned they may have been unwittingly exposed to asbestos—a known carcinogen and lung irritant—while working at the agency’s downtown Washington, DC, headquarters during the mid-1990s.

A recent asbestos remediation notice taped to the entrance of the FEC’s former headquarters, which the agency vacated in March and is now under renovation, prompted alarmed employees to contact the National Treasury Employees Union, which represents some FEC workers.

Union officials said several employees recalled extensive interior work at the old FEC headquarters during the 1990s, and they’re worried asbestos could have then been released into the air.

“FEC employees and retirees are understandably anxious and deserve a complete accounting of any asbestos-related work that was done during the time the agency was leasing the facility,” National Treasury Employees Union President Tony Reardon told the Center for Public Integrity. “Workplace safety is of utmost importance to NTEU and the employees we represent, and we intend to help them get answers to their questions and concerns.”

FEC officials said last week they were unaware of asbestos-related concerns related to the agency’s former headquarters at 999 E. St. NW, a nine-story structure built in 1931 that sits across the street from the FBI’s headquarters.

“The commission is committed to safeguarding the health of FEC staff and has asked management to put union representatives in touch with the General Services Administration, which serves as the FEC’s property manager,” FEC spokeswoman Judith Ingram said.

It’s not uncommon for buildings of that era to contain asbestos, which was, at the time, a common construction and insulation material. The substance typically isn’t harmful unless disturbed and made airborne, according to the National Cancer Institute and Environmental Protection Agency.

And at present, there’s no evidence that any FEC employee or retiree was indeed exposed to asbestos during the 1990s.

An internal memo circulated last week among NTEU members acknowledges as much—while also noting that union members “must recognize the possibility that FEC staff may have been exposed to asbestos for unknown periods of time.”

Three top FEC officials who worked at the agency during the 1990s had varying recollections of work being done inside the FEC’s headquarters at that time.

Trevor Potter, a Republican FEC commissioner who served from 1991 to 1995, said he vaguely recalled remodeling at the agency’s former headquarters but “certainly never heard the word ‘asbestos’ mentioned in connection with remodeling.

“I obviously hope that whatever asbestos was present in the building was deeper than the remodeling and not disturbed,” Potter said.

Scott Thomas, a Democratic commissioner who served from 1986 to 2006, said he has no recollection of any asbestos concern at the FEC’s former headquarters during the 1990s or after.

Larry Noble, who served as FEC general counsel from 1987 to 2000, said he had a “very vague memory of some issue with asbestos” but didn’t recall any details.

The FEC is an independent federal agency charged with administering and enforcing the nation’s federal campaign finance laws and employs about 350 people.

In March, the agency moved from 999 E St. NW, where it had resided since 1985, to the upper floors of a modern office building north of Union Station in Washington, DC’s NoMa neighborhood.