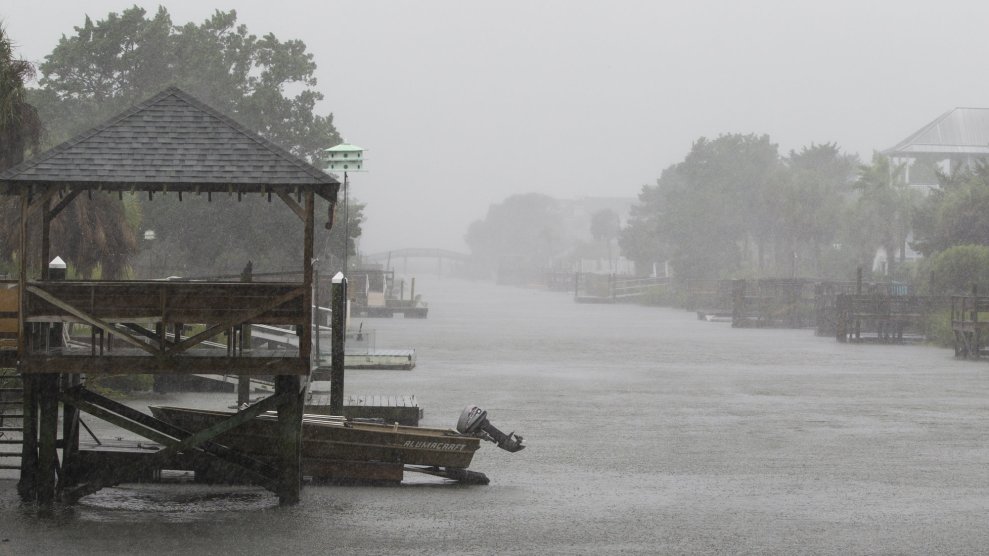 This story was originally published by CityLab. It appears here as part of the Climate Desk collaboration.

On Monday, Sheldon Scott flew from his home in Washington, DC, to Pawleys Island, South Carolina, where his mother and sister live. He was on an evacuation mission: With Hurricane Florence bearing in, he needed to get his family members to safety.

The decision to leave the island was not easy. “It’s the only home my mom has ever known,” Scott, an artist and performer, said by phone from DC, where his family is now, too.

Pawleys Island is a narrow, 4-mile long barrier island south of Myrtle Beach, connected to the mainland by a pair of causeways. The land Scott’s mother lives on was part of the rice plantation where their family members were enslaved more than 150 years ago, he said. Her mother, grandmother, great-grandmother, and great-great-grandmother all lived on the island—and generations before that, too. That’s the story of the Gullah/Geechee nation, an estimated 200,000 people living on the barrier islands of the Carolina, Georgia, and Florida coast. They carry on a distinct culture rooted in West Africa, where many of their ancestors were enslaved by British traders in the colonial era.

The low-lying islands are frequent targets for hurricanes and tropical storms, but historically, the Gullah/Geechee people have resisted evacuating their land, due to deep ties, a respect for tradition, and economic limitations. Many have stayed in the face of Florence, too. “We are people of faith and that is the reason that people do not just leave,” Queen Quet Marquetta L. Goodwine, the elected Chieftess of the Gullah/Geechee Nation, told CityLab via email. “Our souls are tied from the land.”

But as climate change brings more dangerous hurricanes and rising seas, and as the Gullah/Geechee network expands with younger generations living away from home, that connection may be fraying. Many neighbors in the small village where he grew up did leave this time, according to Scott. And they did so with the understanding that their ancestral homes face a double threat—the hurricane itself, and also a vortex of laws that imperil residents’ property rights.

If Scott’s mother’s home is damaged or destroyed, she could face huge barriers to rebuilding or receiving FEMA relief. Worse, a speculator could buy up the land from beneath her. That’s because the land is classified as “heir’s property,” a legal condition that leaves it particularly vulnerable, especially in a disaster. “It’s a constant conversation, but it becomes more sensitive and heightened during times like these,” Scott said.

Like many Gullah/Geechee people, Scott’s mother does not have a clear-cut deed for the land where she lives. Though she owns the trailer on it, pays property taxes and utility fees, and has demonstrably deep connections to the land, the property has never been probated in a will that specifies the exact owner. So her interest in the land is subdivided between a large number of family members who descended from the original holder, centuries ago.

This form of land ownership, called heir’s property, became prevalent through the South after the end of the Civil War, when African Americans freed from slavery bought or were deeded property. Though a comprehensive survey has never been done, one academic study from 2001 estimated that 41 percent of African American-owned land across the Southeast could be classified this way. According to a survey by the Center for Heir’s Property Preservation, a legal aid nonprofit, more than 108,000 acres between 15 counties in the South Carolina Lowcountry—home to many low-income black communities now threatened by Hurricane Florence—are likely heir’s property. “And we know that is an underreported number,” said Jennie L. Stephens, the organization’s executive director.

At any given moment, heir’s property is an unstable form of property for a number of reasons, said John Pollock, the founder and coordinator of the Heirs’ Property Retention Coalition, an Alabama-based nonprofit devoted to protecting the rights of ancestral low-income landowners. For example, when one heir’s property owner wants to build or rebuild on the land—or get a home loan or mortgage—every other heir has to agree. “All of those owners have certain rights to property,” said Pollock.

Many of the beautiful barrier islands in the Carolinas and Georgia where the Gullah/Geechee live have come under immense pressure from real estate and hotel developers in recent years; they’re home to golf courses, waterfront resorts, and vacation homes.

It can be an incredibly difficult to get consensus, especially when all parties might not even be in touch. Without the ability to finance their home, heir’s property owners can often wind up land-rich, but cash-poor. Many of the beautiful barrier islands in the Carolinas and Georgia where the Gullah/Geechee live have come under immense pressure from real estate and hotel developers in recent years; they’re home to golf courses, waterfront resorts, and vacation homes. Some heirs who don’t live on the island may be more interested in cashing out on their connections to this valuable property, selling the land rather than building it up themselves, Pollock explained.

More concerning, selling the land can be fairly easy to do. Any heir has the right to go to court and “partition” the property, or divvy it up into parcels, but without the consent of other heirs. In practice, courts will often simply partition the property by selling it at auction, divvying up the proceeds, even if most of the heirs oppose it, according to a 2018 case study of heir’s property issues by the legal scholar Gabriel Kuris.

Unscrupulous speculators are another threat. Outside buyers who’ve identified an undervalued heir’s property can prey on unwitting heirs, buying up one of their interests at a low price, obtaining a partition sale in court, and then purchasing the entire property for themselves—since, often, the original heirs do not have the capital to afford it themselves. Developers have been doing this to Gullah/Geechee beachfront since the 1970s, and it’s a pattern throughout the South, where African American property owners have lost millions of acres over the past century.

“All the owners, including the ones who’ve been living there for decades, get forced off,” said Pollock. “It’s a dramatic and draconian situation.”

So far, 10 states, including South Carolina and Georgia, have passed the Uniform Partition of Heirs Property Act, a law partly crafted by Pollock’s group that slows down the process and makes these types of sales harder for developers to achieve. But that protection does not exist in North Carolina, where heir’s property is also extensive, and where Hurricane Florence is now claiming lives and causing catastrophic flooding. One real estate data company estimated the storm’s worst-case scenario could cost $170 billion in damage.

In the midst of a natural disaster, these dynamics can leave heir’s properties uniquely threatened. When an owner goes to apply for disaster relief for her damaged home, but discovers her name isn’t on the deed, she will likely struggle to meet deadlines for state and federal assistance. Approximately 20,000 heir’s property owners were denied FEMA or HUD assistance following Hurricanes Katrina and Rita, because they weren’t able to show clear titles to their property, according to a 2017 study by the USDA.

It is possible for heir’s property owners to gain control over their land, but it requires legal action—and that demands financial resources that many heir’s property owners do not have. Stephens’ organization, the Center for Heir’s Property Preservation, extends pro-bono legal assistance to families who must go to court to prove ownership. It generally takes a minimum of six months, and sometimes several years, to get everything in order—perform title searches, find heirs, pay for a land survey. “Usually FEMA has a window in which you can apply for relief funds,” Stephens said. “You can’t resolve heir’s property in a matter of weeks. So what does that do for a family who can’t access those funds?”

In the coming weeks, Stephens expects an uptick in requests for help from heir’s property owners affected by Hurricane Florence. On Monday, when her team returns to the office, they’ll be blasting out notices about their services on social media.

In 2005, Hurricane Katrina shone a light on how many heir’s properties there are in the Southeast. Nearly 25,000 residents in New Orleans lacked a clear title to their home, according to a 2012 report by the Appleseed, a network of public interest legal service centers in the US and Mexico. Because it was so challenging for these largely low-income owners to qualify for FEMA and long-term recovery aid for storm repairs, many of them stopped paying taxes on their homes, and then lost them at public auction—another way that heir’s properties wind up slipping out of the hands of occupants. “It’s common to see a cascade of issues for low-income disaster victims,” said Laura Tuggle, the executive director of Southeast Louisiana Legal Services. “Everyone gets impacted by flooding, but not equally.”

“It’s common to see a cascade of issues for low-income disaster victims. Everyone gets impacted by flooding, but not equally.”

Hurricane Katrina awakened legal reformers to the extent of heir’s property issues through the Gulf Coast and up through the Southeast. As a result, FEMA is no longer quite as strict about the type of documentation owner-occupants must show to prove their right to the land. Several states have relaxed their disaster relief qualifications, too. Once state and federal relief funding packages are released for Florence, Pollock said, heir’s property owners will have a better sense of where they stand.

And in a few states, thanks to the Uniform Partition act, it has become harder for unscrupulous speculators to buy out family members and flip their land. “There’s been a lot of legal reform work to reduce that kind of abuse,” said Heather Way, a law professor and the director of the Entrepreneurship and Community Development Clinic at the University of Texas. Way pointed out that heir’s property issues also affect historically black neighborhoods in Philadelphia, the colonias of the Texas border, and many other predominantly low-income, minority communities nationwide.

But recent reforms designed to protect these property owners have not completely eliminated the risks. Pollock said he would not be surprised to see speculators grabbing up storm-wracked heir’s properties along the prime Carolina coast in the wake of Florence, if they manage to acquire interests in it.

And heir’s property owners affected by Florence may face a long and difficult road ahead; 13 years after Katrina, Kuggle said, her clinic still gets new cases related to the storm.

Scott described the potential loss of his family’s land on Pawleys Island as a distinction between a house and a home. “Most people evacuate with some assurance that, even if the house is gone, the home would still be accessible,” he said. For his family, Florence’s damage could be worse than that. Their ancestral land—their home for generations—could be gone, too.