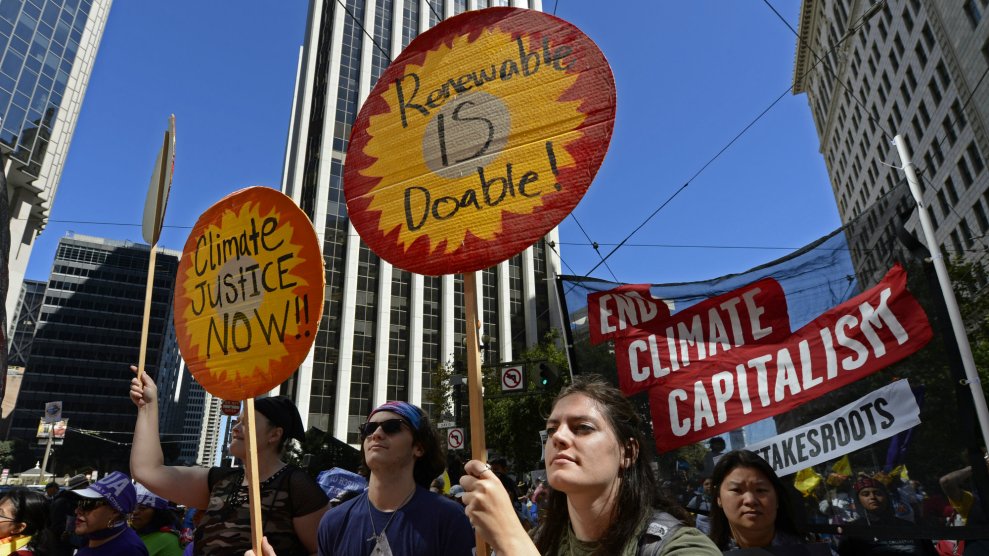 Among the motivating issues for voters in US elections, the environment is typically eclipsed by topics such as healthcare, the economy and guns. But the upcoming midterms could, belatedly, see a stirring of a slumbering green giant.

“The environmental movement doesn’t have a persuasion problem, it has a turnout problem,” said Nathaniel Stinnett, the founder of the Environmental Voter Project, which is aiming to spur people who care about the natural world and climate change to the ballot box. “This group has more power than it realizes. In the midterms we want to flood the zone with environmentalists.”

“The environmental movement doesn’t have a persuasion problem, it has a turnout problem.”

Any such voting surge would go some way to heeding the increasingly urgent warnings from scientists about climate change. A major UN climate report released this week said the world risks worsening floods, droughts, species loss and poverty without “rapid and far-reaching transitions” to energy, transport and land use.

“We show it can be done within laws of physics and chemistry,” said Jim Skea, a coauthor of the exhaustive report. “The final tick box is political will. We cannot answer that.”

An obstacle in the US is the large pool of environmental voters who don’t actually vote, according to public records and polls analyzed by the Environmental Voter Project. It estimates more than 15 million people who rank the environment as a top tier issue didn’t vote in the 2014 midterms. Since its creation in 2015, the voter project claims it has increased turnout of target voters by as much as 4.5 percent in elections.

In 2018, it is aiming to reach 2.4 million of these voters across six states as part of a turnout effort that could help swing some key races. An army of 1,800 volunteers will knock on doors, fire off text messages, make calls and send mailouts. The “punchline” of the Environmental Voter Project, Stinnett said, is that it doesn’t talk to voters about the environment at all. It simply tries to get them out to vote.

“We are already targeting people who care about the environment, all we want to do is get them to vote on election day,” he said. “Peer and social pressure are the best ways—we will send someone a letter saying ‘did you know 93 people in your building turned out to vote last time?’ We play to societal norms and expectations.

“Our focus isn’t to change the outcome of particular elections but there’s no doubt the number of non-voting environmentalists in some districts is so large that they will have an impact. We need to hold politicians’ feet to the fire on the environment, but first of all we need some fire.”

Americans of voting age who care strongly about the environment have been unusually reticent to make their voice heard, for reasons that are still unclear. Stinnett said demographics are part of it—the young, Latinos and black people are simultaneously most worried about climate change and least likely to vote—but this doesn’t explain the full story.

“It’s hard to figure out why,” he said. “Even among young people, for example, environmentalists are less likely to vote. The environmental movement has done a lot of things to change the way we eat, travel and work, but it hasn’t flexed its political muscles yet.”

“The environmental movement has done a lot of things to change the way we eat, travel and work, but it hasn’t flexed its political muscles yet.”

Beyond disasters such as hurricanes and wildfires, most politicians and the media, particularly broadcast news, rarely dwell for long on environmental matters. In 2017, the costliest year on record for climate-related disasters, a total of just 260 minutes coverage of climate change was broadcast across the six major TV networks, according to one analysis.

A year prior, no questions on climate change were put to Donald Trump or Hillary Clinton during three presidential debates. Trump has subsequently ignored the issue in office, save the odd disparaging tweet, while overseeing an administration that has systematically dismantled climate, air and water pollution regulations.

At first glance, the evidence suggests there will be only a mild voter backlash to this agenda. Voters asked recently by Yale to rank 28 issues placed global warming 15th, behind areas like tax reform, immigration, terrorism, healthcare and the economy.

The partisan split is stark, however—while liberal Democrats place global warming fourth out of 28, conservative Republicans rank it dead last. “The issue has become more polarized than abortion in terms of voting priorities,” said Anthony Leiserowitz, the director of the Yale Program on Climate Change Communication. “The most important factor in belief in climate science is political ideology.

“It is remarkable that the base of one of the two major parties in the US lists climate change as a top four issue. You wouldn’t have seen that five years ago. But those numbers drop among conservative Democrats and so candidates are afraid to touch it when reaching to the middle. And among conservative Republicans, the issue is just toxic.”

In a few close midterm races, this split is evident. In Pennsylvania’s redrawn 10th district, for example, Democrat George Scott, a former soldier and pastor, is up against incumbent Scott Perry.

While Scott has said there is an “obligation to our children and grandchildren to take immediate action” on climate change, Perry has done little on the issue other than to attempt to prevent the Pentagon from doing anything related to climate change and seemingly blame God for pollution in Chesapeake Bay. The Environmental Voter Project is targeting 31,292 seldom-voting and non-voting environmentalists in Perry’s district ahead of the election.

“This is Trump country and the environment and climate change isn’t a top issue here,” said Alex Bishop, a registered Republican who works in marketing for a tech company. Bishop lives in York, a city in southern Pennsylvania that is a key urban hub in the 10th district, and is involved in outreach to fellow conservatives on climate change.

The divisiveness of climate change can be separated from broader environmental concerns over the health of the air, water and landscapes. In Yale’s poll “environmental protection” ranks as a top 10 issue for Democrats and is number 11 for moderate Republicans, a group Leiserowitz describes as comprising roughly a third of the party that follows in the Teddy Roosevelt tradition of fondness for public lands and wildlife stewardship.

But in a new political landscape where energizing a core of voters is edging out the desire to reach a diminishing middle ground, climate change is vigorously debated by both sides only during Democratic primary races.

This partisan relationship has shown up in Yale’s polling of Republicans. In the two years before the election of Trump in 2016, belief that climate change is happening increased 19 percent among Republican voters, only to crash once the new president made clear his disdain for climate science and decided to pull the US from the Paris climate agreement.

A further 70 percent of those polled believe environmental protection is more important than economic growth—evidence, perhaps, that the huge swaths of political rhetoric about taxes and jobs is severely out of kilter with the public.

“The link between events like hurricanes and climate change is emerging as an idea in Americans’ minds, even as they are swamped by partisanship,” said Leiserowitz.

“It’s conceivable climate change will swing future elections but it’s also conceivable we will continue to ignore the issue. After all, it gets almost no ink in the media, so how can we expect people to think it’s important?”