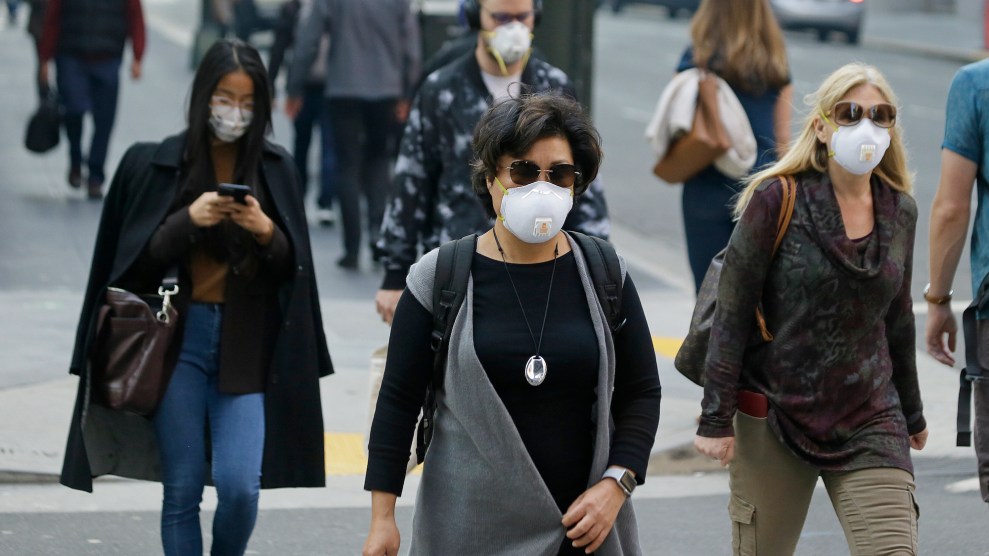 A report released Wednesday by the Lancet Countdown calls climate change “the biggest global health threat of the 21st century,” and warns that if it is not addressed, disease, poor air quality, and food insecurity will threaten millions of people.

The report, written by a team of international researchers, focuses on several climate-related impacts, including extreme heat and its effect on labor productivity and the spread of disease. In 2017, 153 billion hours of labor were lost due to heat—an increase of more than 62 billion hours since 2000. This correlates with a rise in exposure to heat waves and extreme weather events such as hurricanes and wildfires that have already made thousands of climate refugees and are expected to create millions more.

Many of those refugees, one of the report’s author notes, are American. In a press call on Tuesday, Renee Salas, a doctor of emergency medicine at Massachusetts General Hospital and lead author of the Lancet Countdown US Brief, described a recent experience close to home. “I had a patient who came from Puerto Rico, came with bag of luggage, bag of medication she hasn’t taken in days. She was truly a climate refugee who was in my emergency department,” Salas said. “I can’t think of a population more at risk of health effects than a displaced individual.”

Even small changes in temperature and precipitation can result in large changes in the transmission of vector-borne and water-borne diseases, the report notes. In 2016, there were significant increases in the the capacity for insect-borne bacteria and viruses—especially those that cause dengue fever, cholera, and malaria—to be transmitted. (This finding was echoed in last week’s federal climate assessment, which found that climate change would “alter the geographic range and distribution of disease-carrying insects and pests” in the United States.)

Meanwhile, the world’s capacity to grow food also appears to be under threat. An examination of agricultural yields shows declines in every region; 30 countries produced less food in recent years.

The Lancet Countdown’s report does include cause for hope. More electric vehicles were on the road in a 2017 than ever before, and investment in renewable energy has significantly increased, while coal consumption continues to decline. China is responsible for many of these changes. It claims more than 40 percent of all electric cars sold, and it is leading in the installation of renewable energy sources.

Yet spending on climate change adaptation remains well below the amount outlined by the 2015 Paris Agreement, which President Donald Trump has announced the United States will not abide by. And only 3.8 percent of that spending is dedicated to human health. Former Environmental Protection Agency Administrator Gina McCarthy, now the director of the Center for Climate, Health and the Global Environment at Harvard University, says it is crucial to recognize the impacts of climate change on health. She describes visiting California in the midst of the recent wildfire that spread smoke across the state. “It was so clear to see people with masks on literally walking on the streets of San Francisco and downtown Palo Alto,” McCarthy says. “This didn’t look like the United States of America.”

Fine particulate matter—what the masks McCarthy saw Californians wearing are designed to filter out—accounted for nearly 3 million premature deaths in 2015, according to the report. Pollution has actually worsened in nearly three-quarters of the world’s cities since 2010. Road fuel use increased by 2 percent from 2013 to 2015, and cycling—a main alternative to driving in cities—made up less than 10 percent of commutes.

The report, which is aimed at health professionals, argues that they must do more to educate the public about climate change. The impacts of inaction, the report’s authors write, cannot be overstated. As McCarthy notes, “I don’t think people question a diagnosis from their physicians just because a president decides he might not believe in something. This is not about a belief system. This is about science and facts.”