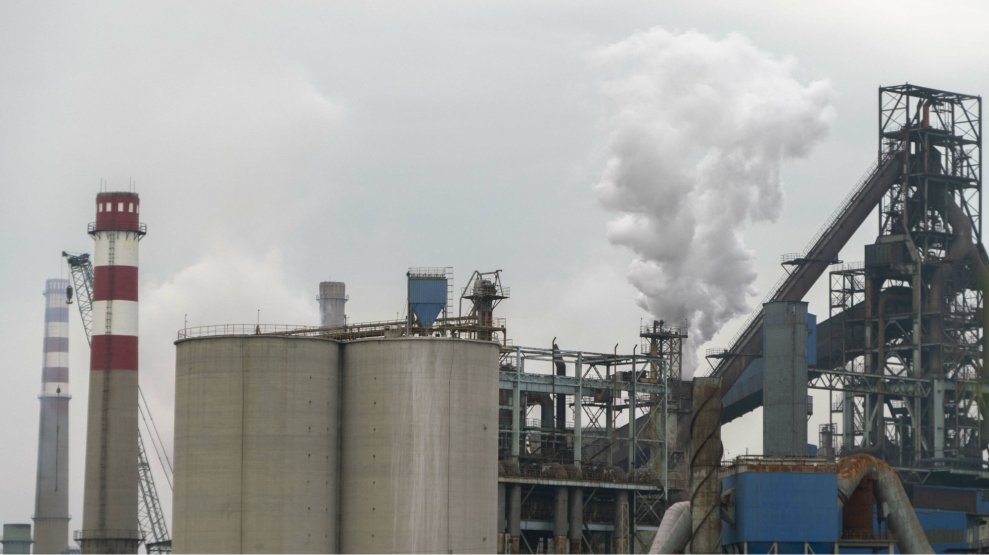 In Katowice, Poland, delegates from around the world have gathered to discuss how to curb emissions of greenhouse gases. The intent is to meet the goals that emerged from the 2015 Paris United Nations Climate Summit. But this year there’s a new top dog at the table.

The United States, led by a president who doesn’t believe in climate change or the scientists who study it, will take a back seat at this month’s climate summit, known as COP24. Meanwhile China, with its massive economy and growing green energy sector, has become the world’s climate leader.

That might seem like a good thing if it weren’t for a couple of problems. China is the world’s biggest carbon polluter, and its emissions won’t start easing for many years. Chinese leaders are also exporting dirty energy around the world through their “belt and road” development program, which is spurring economic growth throughout Africa and Southeast Asia. A construction boom in coal-fired power plants has accompanied that growth in places like Vietnam, Pakistan and Kenya, for example.

So having China as the big power at a climate summit doesn’t bode well for any new get-tough-on-carbon deals between now and the end of the meeting on Dec. 14, experts say. “The negotiations abhor a vacuum,” says Andrew Light, senior fellow at the World Resources Institute and a former climate negotiator in the Obama administration. “The US is not showing leadership, so China steps in.”

“The negotiations abhor a vacuum. The US is not showing leadership, so China steps in.”

The latest round of climate negotiations (held in the capital of Poland’s coal-producing region of Silesia) are focused on the technical issues of how best to measure and verify each country’s stated emissions reductions. Even though the negotiations are held under the flag of the United Nations, there’s no real carbon police out there. So it’s up to each country to self-report their carbon dioxide emissions from factories, automobile tailpipe emissions and other sources that end up forming a warming blanket in the Earth’s atmosphere. Those numbers are then fact-checked by other nations and NGOs.

A major report released in October by a panel of the world’s leading scientists says that the planet will experience severe environmental damage—wildfires, hurricanes, droughts and floods—that could top $54 trillion by 2040 unless there’s a big downward shift in carbon dioxide emissions. That’s going to require every nation to make changes, as well as individual cities, states and businesses.

“It will require things that are more aggressive, like shutting down existing power plants and by 2030, we probably need to reduce global coal power production by 70 or 80 percent,” says Nathan Hultman, director of the Center for Global Sustainability at the University of Maryland.

Hultman, who worked on climate issues in the Obama White House, says the solutions may be politically impossible for now. “Are we doing enough quickly enough?,” he said. “The answer is probably no. At the same time, we have to ask, how do we ramp up contributions toward limiting emissions.”

Still, Hultman and others see progress, and they see China as both a cause of the problem and a potential solution. China burns half the world’s coal and has added 40 percent of the world’s coal capacity since 2002. More than 4.3 million Chinese people work in coal mines, compared to 76,000 in the US (that’s fewer employees than work at Arby’s or in radio).

While China is gaga for coal, it also is more green than anyone else. China owns half the world’s electric vehicles and 99 percent of the world’s electric buses. One quarter of its electricity comes from renewable power like solar or wind. Its cheap silicon panels have driven down the price of solar energy worldwide, and Chinese manufacturers are now starting to export EV batteries to automakers in Europe, Asia and the U.S.

For Chinese leaders, boosting global green energy isn’t a moral issue, it’s an economic one, according to Jonas Nahm, assistant professor of energy, resources, and environment at the Johns Hopkins University School of Advanced International Studies. “It doesn’t come from an altruistic place,” Nahm said. “They are doing this as an economic development strategy.”

“It doesn’t come from an altruistic place. They are doing this as an economic development strategy.”

Nahm has been studying the disconnect between green energy targets announced by party leaders in Beijing, and the actions of local leaders in China’s far-flung provinces. He found that up to 40 percent of renewable energy is wasted because there’s no national power market in China. That means that wind and solar power generated in one province can’t be sent to an adjacent province, so more coal plants are fired up even if there’s cheaper green energy next door.

But China’s reliance on dirty coal has come back to haunt its own citizens, according to Nahm. “The air pollution crisis is a reason to get away from coal,” he said. “That’s the first environmental crisis that’s pushed the government to act, and then the impact of climate change. There’s desertification, water shortages, giant dust storms and some of these problems are getting more severe.”

Nahm and the other experts believe that China is headed in the right direction on climate change, but its economy is so big and so dependent on coal that it takes a while to get there. As for the climate summit in Poland, it’s possible that China might try to wiggle out of meeting even tougher new climate commitments, even as it becomes the biggest nation supporting the UN Paris agreement goals. President Trump said he plans to walk away from the Paris agreement; the earliest he can do that is in 2020.

There’s also the issue of checking up on each country’s measurements. Before the Paris agreement, China was considered a “developing” nation subject to less-stringent reporting requirements. That changed after 2015. But without a strong US influence to check it today, China might try to loosen the bookkeeping, says Samantha Gross, a senior fellow at the Brookings Institute, a Washington-based think tank.

“What will the reporting requirements be and how will they be verified,” said Gross. “That’s what the negotiators will be duking out in Poland. I’m curious to see how far they get.”

As for China, Gross says they hold the cards for the world’s climate future. “We’re all gonna fry if they don’t do something.”