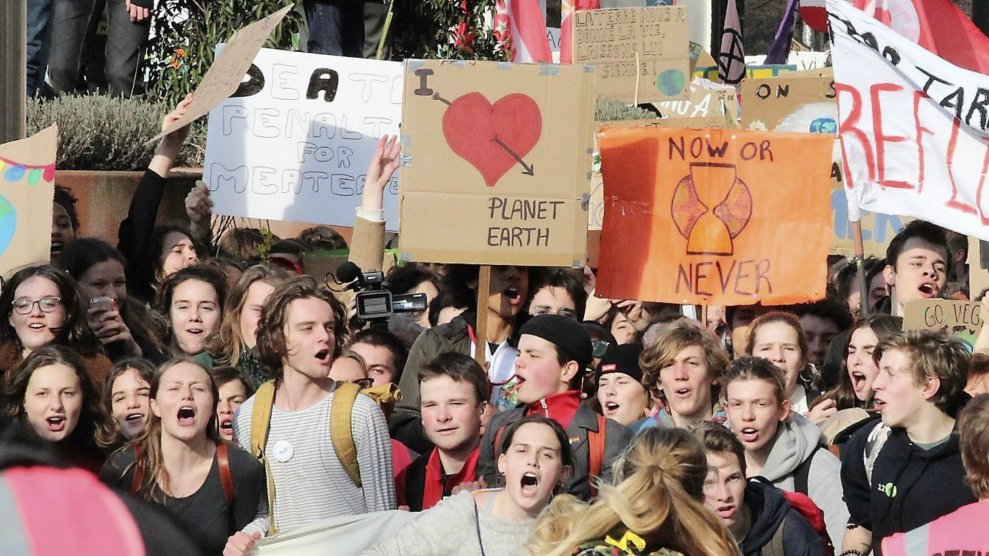 On Fridays at 9 a.m., 10-year-old Lilly Platt doesn’t head to school like other kids in her class. Instead, she takes placards and a keep-cup filled with hot chocolate, and stands outside the town hall in Zeist, just east of Utrecht in the Netherlands.

Her signs read “School Strikes for Climate.” For the last six months, Lilly has been on a peaceful protest for the planet.

“By missing school, I’m making a point about climate change, because what’s the point of learning if our future is being taken away?” Lilly asks.

Lilly echoes the rallying cry of the youth climate movement Fridays for Future, sparked by 16-year-old Swedish activist Greta Thunberg, who last year ditched school to protest outside parliament in Stockholm. Greta’s message was simple: She called for politicians to take action on climate change, and said she would strike from school—her main hold of power as a student below voting age—until the Swedish elections in September.

When Lilly saw videos of Greta’s activism online, she knew what she needed to do.

“She was talking about the Paris agreement and the next generation. I thought, I just have to do this,” Lilly says.

Lilly has to do this because she believes her generation’s future is at risk. A landmark United Nations report last year warned we have less than 12 years to cut emissions by half and keep the planet’s warming to less than 1.5 degrees Celsius above pre-industrial levels to avoid the worst effects of climate change.

“I would like to see a world that still has the Amazon, that doesn’t have species going extinct every five seconds.”

The Netherlands is one of the largest greenhouse gas emitters in the European Union, and in October, a Dutch appeals court ordered the government to cut emissions faster than planned—by at least 25 percent by 2020 (compared with 1990 levels). Now, Lilly wants to hold politicians to account.

“I’m protesting so the politicians will start to listen, and all governments will align to Paris agreement” and keep the planet from warming more than 1.5 degrees, she says. “School is the only thing children have. If the children strike on the weekend, it doesn’t make a difference.”

Originally from London, Lilly’s family moved to the Netherlands in 2014. She decided she wanted to try to save the planet three years ago, at age 7, after counting 91 pieces of plastic waste while she was out walking with her grandfather. “My grandpa told me everything that falls on the ground eventually comes to the ocean. Then I decided I have to do something about this, I have to pick it up.”

She started a litter-picking campaign, sharing photos and videos on social media through Lilly’s Plastic Pickup. She’s since been invited to international environment conferences, and is now a youth ambassador for the Plastic Pollution Coalition, an anti-plastic alliance based in California, and HOW Global, a global development NGO.

It may seem a lot for one 10-year-old to take on, but she’s not so different from other children. Lilly has an encyclopedic knowledge of dinosaurs, a love of drawing and Studio Ghibli. And it’s her wide-eyed, youthful energy that gives her this passion and ability to see things in black and white. She picks up plastic trash from the ground. She avoids single-use plastics. She sits outside her town hall holding placards. Because, if she doesn’t do it, who will?

Lilly has been striking since Sept. 21. With official permission, she strikes for an hour on Fridays, before heading back to school. She’s always accompanied by her mom, Eleanor Platt, a former teacher. Over time, she’s had storytellers, journalists, activists and even the town mayor sit with her in the civic center.

The mayor “said he wanted to show appreciation of what she’d been doing for the climate,” says Eleanor Platt. “He said Lilly was really a teacher, and they are the pupils.”

Throughout her campaign, Lilly has watched the youth climate movement spread across the world. Tens of thousands of teenagers and children have taken to the streets in Australia, Belgium and the UK to voice frustration about the older generation’s inaction on climate change.

Similarly, in the US, more and more young people are rising up to demand action. Kids from almost 30 states have signed up for a climate strike in the US next month, while Rep. Alexandria Ocasio-Cortez (D-N.Y.) pushes for her Green New Deal, a sweeping climate plan for the US to decarbonize in just a decade.

“It’s amazing that people are going this far to protect the environment and nature,” Lilly says.

But as her voice gets louder, she is exposed to more criticism. Lilly has attracted the attention of trolls and climate deniers through social media. They claim she’s been forced to do this by her mother, and denounce her protest as truancy.

Eleanor Platt supports Lilly, but says she is not driving her agenda. Lilly continues to do well at school, and after all, misses just one hour a week.

The online abuse has been overwhelming at times. Eleanor Platt says she has had to log Lilly out of social media accounts (her mum supervises the accounts and they use social media together), as the 10-year-old has received hateful messages and comments comparing the climate protestors with child soldiers who have been indoctrinated.

“As a parent you can support your child, but you really have to [police] this whole thing properly, to make sure they are safe,” her mom adds.

“Sometimes people write to me and say, you really need to let her be a child.”

Lilly interrupts her mom: “But this is what I want to do! I don’t want to look back on a few years and think, ‘Why didn’t I do anything?’ I don’t want to be the person to just sit back and watch the world become warmer and warmer.”

Lilly’s thick-rimmed glasses drop down her nose when she jumps up with excitement. “Let the children be what they want to be, and not what you want them to be,” she says. “Let them have this green heart and help the environment, instead of you trying to control them to go back to not caring for the climate.

“Also, I do not want to play with dolls or Lego. This is what I want to do.”

Lilly will continue her Friday strike until the global climate protests on March 15, an international day of strikes led by students. More than 40 countries have already signed up, from Germany to Uganda, and at least 30 US states.

“Children can make a change,” Lilly says. “It’s not only grown-ups who can save the planet.”