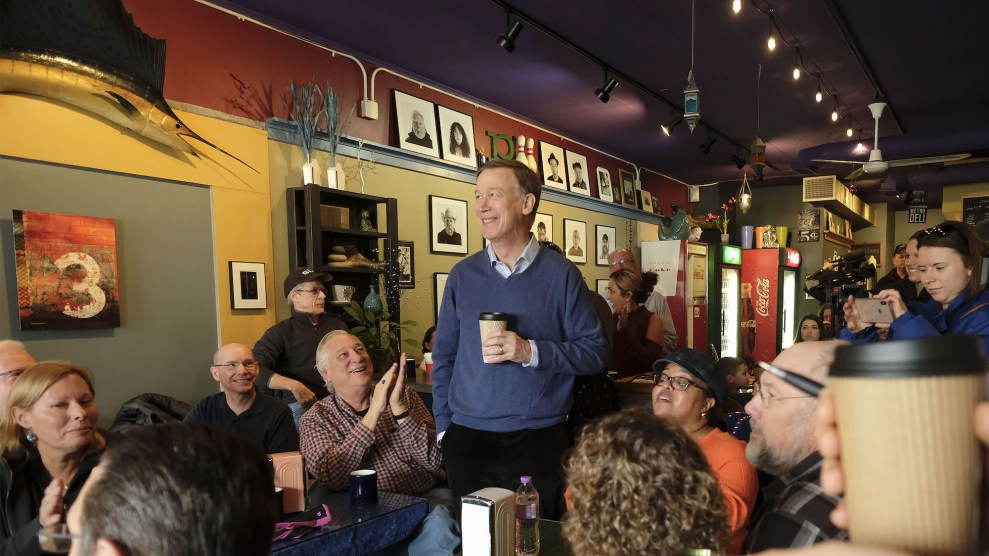 John Hickenlooper is probably the only 2020 presidential candidate who knows what fracking fluid tastes like. In a meeting with an oil and gas representative once, the then-governor of Colorado politely took part in a “ritual-like” sampling of the fluid used to extract natural gas in hydraulic fracturing.

Although he remains at 1 percent in the polls, Hickenlooper represents the uncomfortable balancing act that a Democratic candidate who has had close ties with the fossil fuel industry must sustain when trying to demonstrate his concern with the threat of climate change. At the annual economics-focused oil and gas confab CERAWeek held in Houston, he was the only 2020 candidate to appear, and as a former geologist for an oil and gas company he was quite at home.

Onstage with Daniel Yergin, an oil historian and energy consultant, Hickenlooper read the room, explaining his view of regulations that the industry representatives would be able to stomach. “One of the reasons we became geologists is we love being in these amazing landscapes, and we’re environmentalists at heart,” he said. But “both sides,” meaning environmentalists and industry, “are deeply suspicious. I think that’s the key with all these regulations—you’ve got to get the parties with the strongest self-interest. You’ve got to get them to a point where they feel that it’s a level-playing field.”

None of this is enough to remove the nickname “Frackenlooper” that his environmental critics bestowed on him for his long-held position, described in his 2016 memoir, of fracking as “good for the country’s energy supply, our national security, our economy, and our environment.” Ever since launching the Keystone XL pipeline into a national debate, climate activists in the keep-it-in-the-ground movement have demanded that political leaders block new fossil fuel infrastructure. That is different from the approach that Hickenlooper points to with pride.

The former governor of the fifth-largest oil- and gas-producing state considers his signature climate success as “getting the oil and gas industry to sit down with the environmental community” to create the country’s first regulations on methane, an especially potent greenhouse gas. “I mean, these people hate each other,” he said at a CNN town hall in Atlanta this week as he described his efforts over the course of 14 months to bring the two sides to some agreement.

The rule that they came up with in 2014 required companies in the state to install infrared cameras and other equipment to detect leaks at wells that might be from a loose valve or an opened hatch. The state would then monitor the companies by spot-checking to determine if they were cutting back not just on methane leaks but also volatile organic compounds that contribute to the state’s persistent problems with smog.

After Colorado put its rule forward, other states and the Obama administration’s Environmental Protection Agency and Bureau of Land Management followed with similar rules to monitor methane nationally and on public lands. Today, the Colorado and California rules remain on the books, while the Trump administration is taking a sledgehammer to the federal ones.

He “promoted this belief that we could somehow frack our way to a safe climate.”

Colorado points to its efforts as a success story, citing a 75 percent drop in the number of sites with leaks. Hickenlooper calls it a model for other environmental regulations, neglecting the fact that some industry lobby groups fought not just his proposal but also the EPA and BLM’s versions—a dynamic that set the stage for the Trump administration’s early attacks.

There’s one problem with pointing to the methane rule as his signature climate solution environmental win: “The thing that we keep struggling with is production has gone up,” says EDF’s senior director of state programs, Dan Grossman, who was one of the environmentalists at the negotiating table in Colorado. With overall gas production up 3 percent and oil up 37 percent between 2014 and 2017, the methane footprint keeps rising; there’s always methane escaping into the atmosphere. Plus, it’s difficult to pinpoint exactly how bad the problem has become. The EPA claims oil and gas operations lose 1.4 percent of methane overall; Environmental Defense Fund estimates a more dangerous 2.3 percent while other researchers put it even higher.

Hickenlooper told CERAWeek that it’s better to have a “pretty good” regulation that’s durable and leads to progress on fugitive emissions than have opposing sides paralyzed in a standoff.  He “promoted this belief that we could somehow frack our way to a safe climate,” says Jeremy Nichols with the Colorado-based environmental group WildEarth Guardians. “What will solve the climate crisis is moving away from oil and gas. There are others in the Democratic Party who share that perspective as well.”

Partly because of environmental activism and partly because of fracking’s poor public image from groundwater contamination and the massive Aliso Canyon gas leak, few candidates in the 2020 Democratic primary are describing natural gas as a “bridge fuel” to cleaner energy in their stump speeches the way President Obama and Hillary Clinton once did—though there are major exceptions: Joe Biden has been supportive of fracking in the past, and so has former Rep. Beto O’Rourke, who walked the line in his 2018 Senate campaign by asserting that fracking should be done “in a responsible, safe way that does not jeopardize the environment.”

Speaking from the state that’s been the frontline of the nation’s fracking boom, WildEarth Guardians’ Nichols says the “Democratic Party has to have a come-to-Jesus moment in the 2020 election—that they can’t save the climate with support of fracking.”