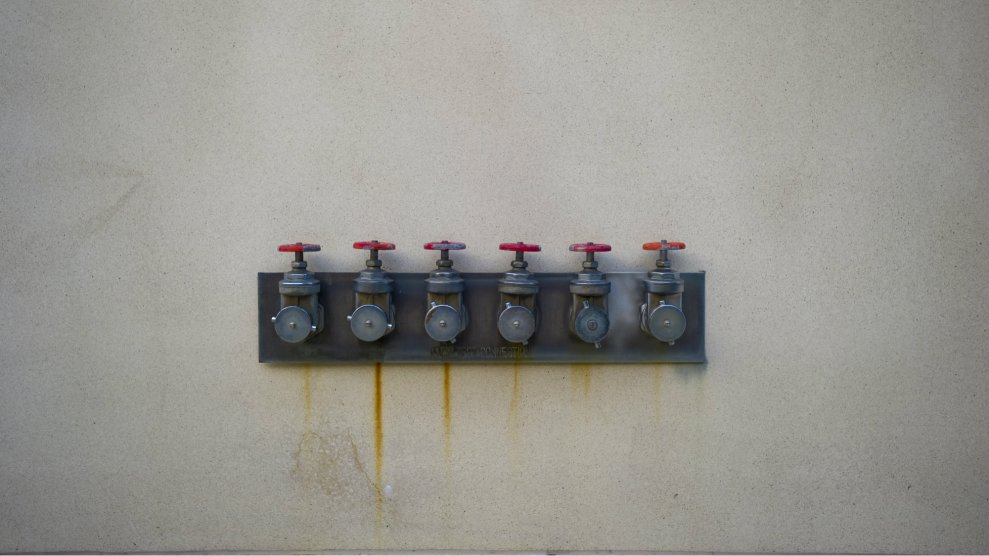 When Shakima Thomas came home one day last October, she found a piece of paper wedged in her door telling her the water in her home could be contaminated with lead.

Thomas, a social worker in Newark, New Jersey, knew what it meant—that the tap water she and her four-year-old son Bryce had been drinking could have profound effects on their health.

“My kid loves water—he loves it—so it was difficult telling him not to drink the water,” Thomas said. “He’s four years old and doesn’t understand.”

A century-long war to remove lead from Americans’ daily lives has been successful on some fronts, but a lack of regulation, political will and funding has meant the contamination of drinking water remains a public health crisis.

There “is no known level of lead exposure that is considered safe,” the World Health Organization has warned. The heavy metal, used widely in the past manufacture of water pipes, can cause serious health problems in adults including high blood pressure and kidney damage as it accumulates in the body at high levels of exposure.

But children are particularly vulnerable to its toxic effects, which can affect the development of the brain and nervous system. Even low levels can impair a child’s IQ, academic achievement and ability to pay attention. US studies have shown lead-exposed children are more likely to be aggressive, leading to bullying, truancy and even jail.

“Unfortunately, it’s a problem that was swept under the rug for many years, even though many experts were well aware there was excess of lead in their tap water.”

“Unfortunately, it’s a problem that was swept under the rug for many years, even though many experts were well aware there was excess of lead in their tap water,” said Erik Olson, a senior director of advocacy at the Natural Resources Defense Council, about lead in schools in particular.

“Lead is a neurotoxin, it drops IQ scores, it’s linked to aberrant behavior and violence,” said Howard Kessler, a retired doctor based in Tallahassee, Florida, who is part of Physicians for Social Responsibility.

“The concern is that while we are not taking much action, children are being damaged on a generational level. We are supposed to provide them with a safe environment, not poison them,” he said.

Elevated levels of lead have been found in schools across the US in the wake of the toxic water scandal that has roiled Flint, Michigan, since 2014. In Newark, officials had first found lead in school water fountains and taps nearly two years before Thomas was warned of its possible presence in her drinking water at home.

More than half of public schools in Atlanta were found to have high levels of lead, in some cases 15 times above the federal limit for water systems. Schools in Baltimore, Portland and Chicago were all found to have significant amounts of lead in drinking water.

The most startling problems arose in Detroit, where the school district shut off water in all 106 school buildings last year. A total of 57 Detroit schools tested positive for lead, copper or both. Students were told to switch to bottled water. The city is now looking to spend $2m on new filters and water fountains.

Communities outside major urban areas have not escaped exposure to lead. Two dozen schools and daycare centers in Maine were found to have high levels, while authorities in Vermont have vowed to test more of its schools after a report found 16 of them had lead contamination.

Often, when schools detect lead in fountains or taps, they are simply temporarily shut down, and children provided with bottled water, or fitted with filters—short-term solutions which experts say have serious flaws.

For Newark’s residents, the water crisis means a burden they can scarcely bear. While some neighborhoods have experienced a renaissance in property values, more than one in four residents live in poverty, double the national average.

It took Thomas, who relies on public transportation, almost two weeks to get a water filter from the city after a computer erroneously showed she had already received one. While filters provide only temporary relief from lead-contaminated water, they are often necessary as cities and residents work together to remove dangerous lead plumbing connecting homes to water mains.

“It’s really unfair and I think it’s sad,” said Thomas. “Kids have to go to school with the water being toxic, and they have to come home and the water is toxic. I just think it’s poor leadership.”

In June, the Natural Resources Defense Council launched a lawsuit against the city, joined by a group of Newark public school teachers, seeking to force its hand in confronting the problem. Mayor Ras Baraka has called on President Trump not to build a wall—but to use that money to fix water infrastructure in places like Newark.

Yvette Jordan is a public school history teacher and one of a handful of plaintiffs in that lawsuit against the city of Newark.

“There wasn’t the public outcry because people were so overloaded with the vicissitudes of life,” she said. The reaction was, ” ‘I gotta worry about water too? Are you kidding me?’ ”

When Thomas found the notice stuffed in her door jamb she was probably unaware a 1988 law—the Lead Contamination and Control Act signed by Ronald Reagan nearly 30 years to the day before she found that slip of paper—was meant to prevent this.

In the US, lead was nearly phased out of gasoline and paint by the mid-1980s. This, alone, was a huge public health victory that was years in the making, and showed nearly immediate benefits.

“When we took lead out of gasoline, the blood lead of Americans went down by 80 percent,” said Ellen Silbergeld, a MacArthur Foundation genius award winner who was at the forefront of toxicology research and advocacy at the time.

“In my life working on environmental problems, I’ve never seen anything like it,” she said. “Within three months you saw the results. That’s astounding.”

After removing lead from the welds of tin cans, gasoline and paint, “It was almost like, ‘Hey! We solved this,'” said Silbergeld. “We were really overlooking the potential for lead in drinking water.”

The LCCA was meant to further these public health laws by requiring schools and daycares to test for lead-in-water, but in 1996, it was unexpectedly gutted in a New Orleans court. Two families whose children were exposed to lead-tainted water at school sued Louisiana for failing to notify schools in a timely manner about lead-lined water coolers. They won in lower court, but the state appealed, and they were sent before a three-judge panel in the fifth circuit.

Judge John M Duhé, a Reagan appointee, wrote the decision for the majority, and it meant schools no longer had to test for lead in water. Without the obligation to test water, schools and daycare centers did almost nothing to address the problem for decades.

Across the US, four in 10 school districts did not test for lead in the previous 12 months, a 2017 report by the US Government Accountability Office found.

The scale of the problem is only gradually becoming apparent. Across the US, four in 10 school districts did not test for lead in the previous 12 months, a 2017 report by the US Government Accountability Office found.

Of the 43 percent of districts that had tested, which cover 35 million students, more than one-third found lead. The Environmental Protection Agency and federal Department of Education agreed with the report’s recommendations that lead testing in schools should be encouraged, but testing remains voluntary.

While the EPA works on devising a new standard for lead levels at which schools should take action, some states have acted on their own. In Florida, there are two separate state legislature bills that would ensure filters are put on water fixtures in schools built before 1986.

Still, said Christina Hecht, a researcher with the University of California Nutrition Policy Institute, one of the key takeaways from her study of state lead testing policies is the wide variation in how lead is meant to be tested. The problem, “Calls out for federal attention.”

Unlike removing lead from gasoline or paint, addressing lead in water requires infrastructure investment and widespread renovation. Plumbing in buildings and under sidewalks is often the source of lead contamination in water, and digging them up is expensive and time-consuming.

Estimates of how many billions of dollars it would take to gradually remove lead from schools vary widely, but experts believe the investment could save as much as $84 billion annually—the estimated cost of healthcare, education and incarceration of children harmed by lead annually.

In the meantime, schools that are determined to rid themselves of lead are often hindered by a lack of funding, as well as the labyrinthine task of checking and rectifying dozens of taps, water fountains and other fittings in school buildings.

“If you go about testing in a school you’ll likely find lead in water fountains or faucets, but to replace everything is cost prohibitive,” said Siddhartha Roy, an engineer at Virginia Tech who has worked on water testing in Flint and elsewhere. “The interim solution is filters, which aren’t ideal because you have to maintain them and replace cartridges on a regular basis. It’s a tragic situation.”