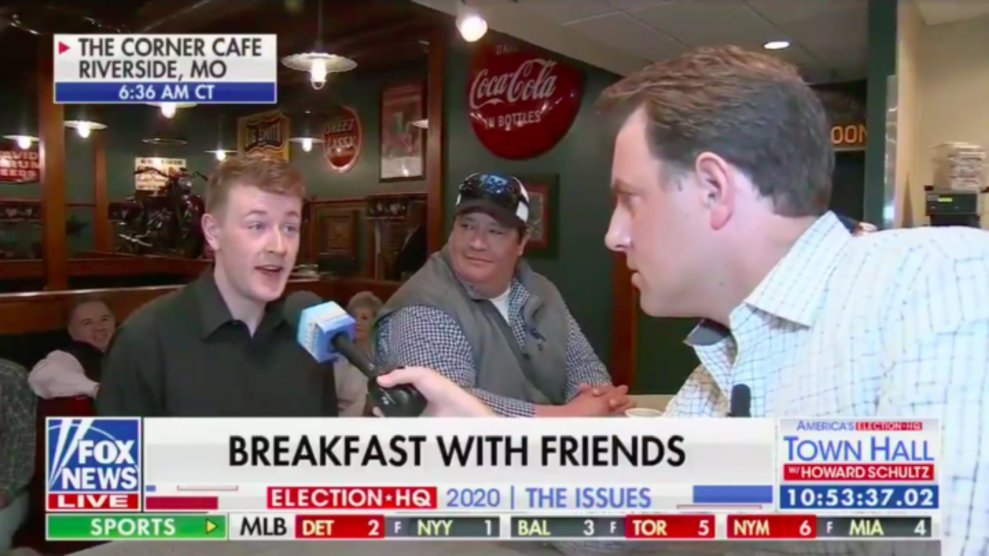 Jack Vandeleuv’s Thursday night went like this: He went to a diner in Riverside, Missouri, ordered himself a vegetarian omelet and served up arguably the most clear-eyed defense of the Green New Deal yet broadcast on Fox News.

In a series of rapid-fire responses, the 23-year-old library worker from Kansas succinctly laid out the scope of the climate crisis. When Fox News’ Todd Piro pressed him repeatedly on the cost of a Green New Deal—a favorite Republican talking point—Vandeleuv’s sober, confident replies seemed to catch the host off guard. A researcher with Media Matters for America tweeted the clip that went viral Thursday night. It drew praise from Rep. Alexandria Ocasio-Cortez (D-N.Y.), the Green New Deal’s lead proponent in the House, who called Vandeleuv an “MVP.”

“How did we pay for World War II?” Vandeleuv asked. “At the end of the day when something is this important our economy is going to suffer if we don’t pay for it.”

Piro, incredulous, asked if he agreed “with the sentiment that this is as big a deal” as the deadliest war in history.

“A little over 400,000 Americans died in World War II,” Vandeleuv said, then cited a World Health Organization estimate of the number of people killed globally from warming-linked extreme weather, drought and disease: “Climate change is killing 150,000 people per year, at least.”

Piro again returned to the cost: “Let’s talk about the money, because that’s a huge part of this. How are we going to pay for it?”

“During World War II, for one thing, the government just pushed some of the cash up front and raised some taxes on some folks,” Vandeleuv said. “But at the end of the day, it stimulated the economy so much everyone benefited.”

“During World War II, for one thing, the government just pushed some of the cash up front and raised some taxes on some folks,” Vandeleuv said. “But at the end of the day, it stimulated the economy so much everyone benefited.”

“To review,” Piro asked once more, “you are in favor of raising taxes in order to support the Green New Deal?”

“If that’s the optimal solutions economists sort out, I’ll go with that,” Vandeleuv said.

In his first interview since the clip aired, Vandeleuv told HuffPost he’s surprised by his sudden viral fame. A friend had tipped him off earlier that day, telling him a Fox News producer was camped out at the diner looking for subjects to interview ahead of a town-hall broadcast with billionaire Starbucks founder Howard Schultz, who is considering a centrist run for the Democratic presidential nomination.

“The short answer is, I didn’t really prepare for it,” he said. “I just walked into that diner not knowing what to expect at all.”

The last few months have been a formative moment for the recent college graduate’s climate politics. He understood the threat of climate change since he was a kid and first watched Al Gore’s 2006 documentary “An Inconvenient Truth.” But the ceaseless spate of historic natural disasters—from the back-to-back hurricanes of 2017 to last year’s deadly wildfires—made the phenomenon realer than before. Then the United Nations report in October, warning that the world must halve global emissions over the next decade or face catastrophic warming, set a harrowing deadline.

“I was really inspired by that,” he said. “Like, ‘Wow, I can actually participate in this in my community.'”

He’s now helping to organize a town-hall meeting next month in Kansas City to educate voters about the promise of a Green New Deal.

He said it’s fair to ask about the cost of a Green New Deal. But, on Fox News, it seems to be an obsession, he said. Republicans on the channel frequently claim the Green New Deal would cost $93 trillion—a completely bogus number, as Politico reported. In reality, it’s impossible to put a price tag on the Green New Deal because it’s not yet policy. The only existing legislation on the Green New Deal is a joint resolution Ocasio-Cortez and Sen. Ed Markey (D-Mass.) released in February outlining the core tenets of what future bills should include. The resolution is a statement of purpose, not a policy itself.

Guessing the questions would be loaded and asked in bad faith, he weighed whether it was appropriate to appear on the channel at all.

“What I come back to over and over again is that when it comes to climate change, there is very real value in talking about it all the time,” he said. “It’s something that has slipped people’s minds for years and years. Even if you’re a Fox News viewer and sympathize with the Fox News viewpoint, I want you to talk about it.”

That approach appears to be working for him. After the segment, the man sitting to his right at the diner, a self-declared “very conservative voter, not on board with the Green New Deal or climate” spent about 20 minutes talking to Vandeleuv.

“If anything resonated with him, it was the analogy to World War II,” Vandeleuv said. “He remembers there was a great problem in America. The government stepped in and funded this great, massive military to fight the Nazis.”

“People understand the broader strokes of history,” he added. “Focusing on that can be very helpful.”