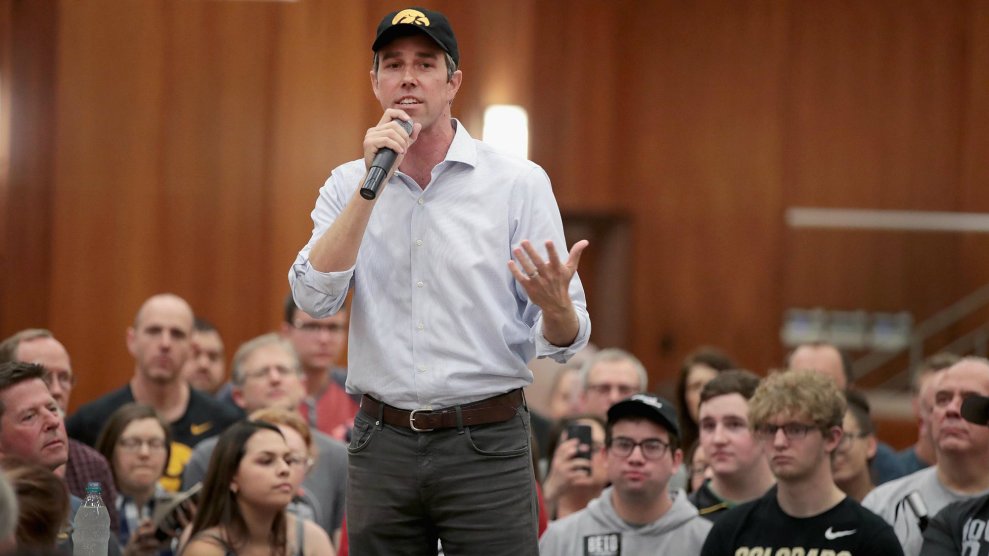 In 2015, current Democratic presidential candidate Beto O’Rourke twice bucked his own party to vote with Republicans to end the 40-year restriction on selling US oil overseas.

In October that year, O’Rourke voted on a bill to outright lift the ban. But the legislation stalled in the Senate. In December, he voted to approve an amendment to a budget bill that ultimately passed in the Senate.

The export proposal, which the League of Conservation Voters called “anti-environment,” helped flood global markets with US oil just as fossil fuel emissions rapidly warmed the planet and threatened catastrophe within a generation. It’s also a mark against O’Rourke, whose record on climate change is facing new scrutiny as his presidential campaign heats up.

At the time, O’Rourke called the export ban “outdated policy” and said lifting it “means that America can compete with other oil-producing nations” and make allies “less dependent on energy from other volatile areas in the world.”

Now, as the United States is poised to surpass Saudi Arabia as the world’s No. 1 oil and gas exporter, his campaign has echoed that defense.

In a lengthy statement to HuffPost, Chris Evans, a spokesman for O’Rourke’s presidential campaign, said former congressman believed the vote would ensure “the resources we consume—even as we work quickly to transition to renewable energy—are governed by the strictest environmental laws, safeguards, and standards implemented by our country but not by others.”

The position is also widely touted by oil and gas lobbyists, whose ranks ballooned to 300 by the end of the third quarter of 2015 as the industry spent $38 million ahead of a vote to lift the export ban, according to the nonpartisan Center for Responsive Politics.

But it wasn’t where most Democrats stood at the time. In a committee report during the legislative debate, Rep. Frank Pallone (D-N.J.), then the ranking member on the House Committee on Energy and Commerce, called the effort to lift the ban an “extreme approach” that “not only repeals current crude export restrictions, but also ensures that no export restrictions – for any reason – could be implemented or enforced in the future.” He warned that “the vaguely drafted provisions of the bill could have potentially vast consequences for consumers, the environment and climate change, and national security.”

The argument swayed Texas Democrats, as the nonprofit news site Capital & Main reported last year. On the first vote, six of the 11 Democrats in the Texas delegation approved the bill. But on the second, O’Rourke was among just three who voted for it.

O’Rourke’s campaign noted that the vote “ultimately also allowed for the extension of a renewable energy tax credit for wind and solar, which was a major boost to both industries critical for Texas’ role as the number one producer of wind energy and the number one state for solar potential.” Analyses at the time praised the tradeoff. But the campaign said the Obama administration’s efforts to increase regulations on drilling, carbon dioxide and methane emissions factored heavily into the vote. O’Rourke would oppose lifting the oil export ban today as President Donald Trump rolls back rules for the industry, Evans said.

“Ultimately, if the same vote were held today during the Trump administration—which has rolled back methane standards for oil and gas, appointed fossil fuel lobbyists to run the EPA, and weakened enforcement of our clean air and clean water laws—Beto would not be able to support the bill,” Evans said.

The statement comes days after the O’Rourke campaign shifted its stance on the former El Paso congressman’s 2016 vote against Democratic legislation to bar federal funding to study oil and gas exploration in the eastern Gulf of Mexico.

“He wouldn’t cast that same vote today with all that he knows and all that he has heard from people,” Evans told the Texas Tribune last week.

O’Rourke sports a lifetime score of 95 on the League of Conservation Voters scorecard. But in June 2017, he joined 68 Democrats to back a GOP bill designed to protect utility companies from liability for causing forest fires. During a floor debate, Rep. Raúl Grijalva (D-Ariz.) called the bill “nonsense” and said it “shifts an incredible burden and risk on to American taxpayers.”

Last September, O’Rourke voted to pass a Republican bill to make it easier to export low volumes of natural gas in a way that eight environmental groups warned limited “the power of communities neighboring these facilities to participate in our Government’s environmental decisions.”

O’Rourke’s campaign told HuffPost the utility bill better managed “the risk of forest fires by cutting government red tape for utilities that proactively engage in vegetation management and maintenance activities.” On the natural gas legislation, the campaign played down the risks to communities and stood by what it called the bill’s “economic benefit and job potential.”

Since 2015, the severity of the climate threat has come into clearer focus. Extreme weather events are becoming routine, with annual records set for deadly hurricanes, floods and wildfires. In October, the United Nations warned that unless world governments halve emissions, rapidly scale down fossil fuel use and begin removing carbon dioxide from the atmosphere, average global temperatures are guaranteed to surge past 2.7 degrees Fahrenheit above pre-industrial levels. That degree of warming is forecast to kill millions and cause upward of $54 trillion in damages. A month after the UN report, a congressionally-mandated report from 13 federal agencies confirmed the findings.

In January, an analysis by scientists at more than a dozen environmental groups found that US oil and gas drilling, spurred in part by the export boom, threatened to unleash 120 billion metric tons of carbon dioxide—equal to 1,000 coal plants’ worth of climate pollution—into the atmosphere by 2050, making the UN’s reduction goals nearly impossible.

David Turnbull, a spokesman for the environmental group Oil Change USA, said surging production shows that trading renewable energy incentives for oil exports “was a terrible deal that’s resulted in an emergency of oil and gas production in the United States.”

“It’s driving our climate off the cliff. Anyone who took that vote needs to reckon with the reality that lifting the crude export ban was a terrible decision.”

“It’s driving our climate off the cliff,” Turnbull said. “Anyone who took that vote needs to reckon with the reality that lifting the crude export ban was a terrible decision.”

O’Rourke wasn’t the only 2020 presidential contender who voted to lift the export ban. Sens. Cory Booker (D-N.J.), Kirsten Gillibrand (D-N.Y.), Amy Klobuchar (D-Minn.) and Elizabeth Warren (D-Mass.) joined a majority of Democrats to approve a budget bill that included a provision ending the export ban. Sen. Bernie Sanders (I-Vt.) voted against it. Yet O’Rourke voted for a bill that explicitly made the change, which a majority of members of his party opposed.

The vote complicates O’Rourke’s efforts to appeal to a Democratic base increasingly demanding radical action to curb greenhouse gas emissions. Last year he was removed from the list of politicians who’ve taken the No Fossil Fuel Money pledge after he received $430,000 from individuals in the oil and gas industry during his race to unseat Sen. Ted Cruz (R-Texas.). It’s difficult to avoid small-dollar donations from the industry for which Texas is best known, but 75 percent of O’Rourke’s donations exceeded the $200 threshold the pledge bars. Twenty-nine came from oil executives.

“A vote that seemed safe just a few years ago now is toxic to candidates who want the support of young people and people who care about climate change in the 2020 elections,” said Stephen O’Hanlon, a spokesman for Sunrise Movement, the youth-focused grassroots group whose protests propelled the Green New Deal into the political mainstream. “If Beto O’Rourke wants to be taken seriously on climate change, he needs to show that he’s willing to stand up to the oil and gas lobby.”

His voting record won’t be the only ammunition opponents use to question O’Rourke’s climate record. Business tycoon William Sanders, O’Rourke’s wealthy father-in-law, helped finance his political career and has served as a lightning rod for criticism ever since. Until recently, Sanders served on the board of an oil company, Mother Jones reported.

Still, O’Rourke told HuffPost in January he supported “the concept” of the Green New Deal, the national industrial plan to zero out emissions over the next decade and provide high-wage clean-energy jobs to millions of Americans. In February, O’Rourke called the resolution Rep. Alexandria Ocasio-Cortez (D-N.Y.) and Sen. Ed Markey (D-Mass.) released outlining the core tenets of a Green New Deal “the best proposal” he’s yet seen “to ensure that this planet does not warm another 2 degrees Celsius.”

His campaign did not respond to questions Wednesday about how he’d implement the plan set out in the resolution.