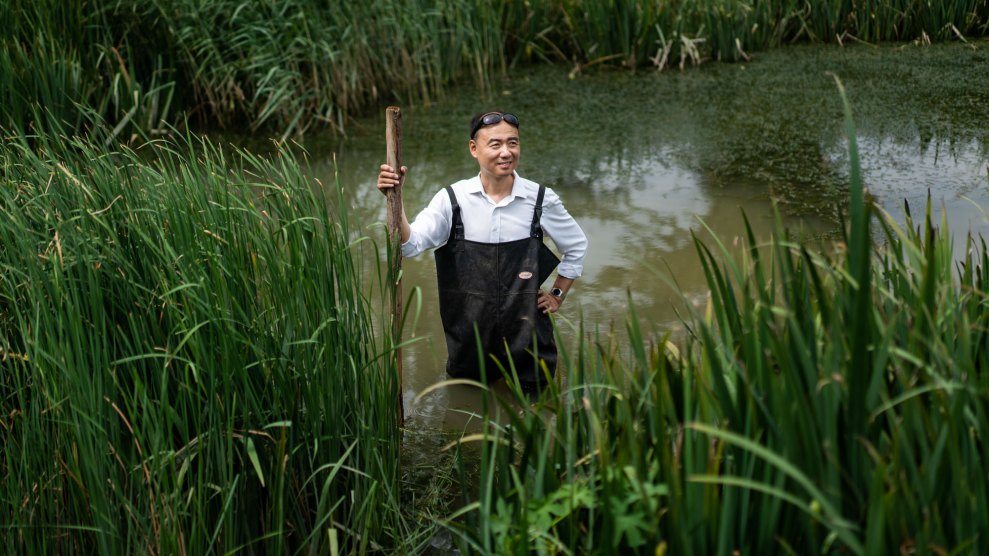 One humid July day, the Chinese environmentalist Ma Jun stood in front of an alley sandwiched by two warehouses at the factory of an Apple supplier called Catcher, a two-hour bullet-train ride south of Beijing. He wore safety goggles and scribbled in a notebook. Two Apple executives flanked him.

Guides from Catcher toured Ma around towering black tanks and large sheds containing vats and pipes that disposed of the toxic chromium waste produced in manufacturing parts for iPhones, iPads, and MacBooks. Apple and Catcher said the state-of-the-art system processed the waste without any discharge. Ma’s group, the Institute of Public and Environmental Affairs (IPE), was considering writing a report on the technology, if it could verify the claim. After a tour of the nearly 500-acre facility, Ma and the executives adjourned to an office conference room on the campus. The atmosphere was cordial, one of partners rather than adversaries.

“There were all these fire-breathing Greenpeace types—and then there was Ma.”

Apple’s meetings with Ma weren’t always like this. The first one, at its California headquarters in 2011, when he confronted the company about environmental problems at multiple factories, was tense. IPE had issued a damning report on the behavior of tech companies in China, and Apple took a year and a half to set up a meeting with IPE. The discussion lasted about five hours, with Apple ceding little beyond a vague statement about transparency. More than seven years later, IPE has helped audit many of Apple’s factories and suppliers in China, and the group now ranks the company first on its list of the most transparent companies.

Apple isn’t the only company that Ma has helped push toward reform. Since IPE was founded in 2006, his team has gotten more than 1,300 factories to address environmental messes such as discharging waste into rivers. The secret to Ma’s success is a clever tool: IPE has compiled a database of more than 1.3 million environmental violations committed by Chinese factories. It publicly displays this information in an online map and a smartphone app, pushing factories and the brands they supply to clean up. Many of them do, agreeing to third-party audits approved by IPE and its partner organizations to clear their records from IPE’s database. With this, Ma has convinced two of the world’s most opaque institutions—international corporations and the Chinese government—that publicly monitoring pollution is in their interest. For his accomplishments, he has won the prestigious Goldman Environmental Prize and many other awards, making him a major face of China’s environmental movement.

Despite the accolades, Ma’s demeanor is humble and self-deprecating. He sees his work as an effort to help companies, not undermine them. His modesty is likely one of the reasons the Chinese government doesn’t feel threatened by him. “There were all these fire-breathing Greenpeace types,” one observer of the Goldman award ceremony told me. “And then there was Ma Jun.”

On smogless days in Beijing, the city’s west side is visible from IPE’s office tower. Ma Jun, 50, grew up there in the early years of the Cultural Revolution, born in 1968 to an engineer and government administrator. Mao Zedong had disbanded traditional schools, and Ma spent much of his childhood playing with crickets and beetles and exploring farmland. His childlike curiosity has stayed with him, though the fields have been overrun by Beijing’s sprawl. After graduating from college, he found a job as an assistant for the South China Morning Post, Hong Kong’s leading English newspaper. He cut out every environmental story he found, studying what few articles he came across, and spent vacations reporting on water pollution in China. The country’s rivers, he discovered, were catastrophically polluted and overdrawn. He wrote a book about the issue that reached a wider audience than he’d expected, and soon, among global environmental circles, it began drawing comparisons to Rachel Carson’s Silent Spring.

After the book’s publication, Ma worked for an energy consulting firm in Beijing and then left to study at Yale’s World Fellows program, which helps train up-and-coming leaders from around the world. He studied American environmental law, contemplating which regulatory tools could be best applied in China. By the end of his time in New Haven, he’d written a new book that argued for progressive legal reforms to Chinese environmental law, including ones that emphasized greater environmental transparency from both government and corporations along with remedies for the victims of pollution. Editors in China were afraid to publish it. “They told me I’d forgotten where I was,” he recalls.

Instead of publishing the book, he decided to implement its ideas through a non-governmental organization. For its first project, in 2006, Ma’s three-person staff mined every available government record of water pollution in China, transcribing them by hand, then publishing a rudimentary interactive map online. “In the beginning, all that work felt useless,” says Wang Jingjing, one of IPE’s early staffers, and now married to Ma.) IPE’s first breakthrough came after Panasonic executives contacted it about one of their factories on the map. Together with IPE, they orchestrated a full cleanup. Soon, other companies began contacting IPE for help, often after journalists or activists used IPE’s map to expose factories’ environmental violations.

“What we’ve done is kind of like Chinese acupuncture. You press one spot in one place, and that causes a reaction in another.”

IPE’s reputation continued to grow within environmental circles, and in 2014, it released a pollution-tracking app now called the Blue Map. The app’s greatest success came amid somewhat awkward circumstances: in China’s most famous environmental documentary film, Under the Dome—which the government first promoted and then censored—Chai Jing, the film’s reporter-director, gave the app a shout-out, encouraging people to download it. The film received around 300 million views within a week of its release, and the app crashed. To get it back online, IPE turned to software engineers who manage train ticketing systems during China’s lunar new year, the greatest annual migration in the world, when 400 million people return home for the holidays.

For thousands of years, Chinese rulers have struggled to enforce laws passed in Beijing at the local level. “Heaven is high and the emperor is far away,” goes one proverb. Local officials are largely promoted based on economic growth, which makes them wary of enforcing costly environmental laws. It’s common, for example, for officials to tip off factories before environmental inspections occur, reminding them, say, to turn on the scrubbers that clean the emissions passing through a smokestack. Regulators and judges have limited power to prevent such moves, since they’re subordinate to these officials or can be easily ignored. In the short term, it’s often more effective for IPE to sidestep local governments and directly contact brands and factories about the information it’s collected. After seeing their records made public, factory owners often agree to address them. “What we’ve done is kind of like Chinese acupuncture,” Ma told me. “You press one spot in one place, and that causes a reaction in another.”

If IPE can persuade companies to behave better, Ma argues to skeptical officials, this makes the Communist Party look more effective and enhances social stability—the only performance metric the government considers as important as economic growth. It’s working: Over the years, as Ma has won the trust of China’s leaders, his access to them has increased. A few weeks after the Catcher visit, he spent two days in a neighboring province training local officials on the benefits of transparency. “It’s funny, local regulators love him,” says Alex Wang, a former lawyer at the Natural Resources Defense Council, who is on IPE’s board.

Moving hundreds of China’s millions of factories toward compliance, “is only a drop in the bucket,” Ma admits.

In China, environmental activism tends to be tolerated more than other types of advocacy, even under President Xi Jinping’s more repressive politics. Yet Ma is careful not to push the government too far. Scholars who study Chinese politics sometimes refer to its authoritarianism as strategically “consultative” of civil society; officials have actively asked for comment and feedback from grassroots groups and independent experts on major policies like the 2014 Environmental Protection Law. Influential public figures like Ma have developed a kind of expert status in official circles, and they’ve worked hard to keep the Chinese government open to allowing—and even inviting—such public feedback. Sometimes, maintaining that cooperation requires backpedaling and finesse. Once, a team from one of IPE’s partner NGOs was driving around the countryside with a camera, photographing factories with violations listed in IPE’s database. It posted the photos on social media, revealing the precise locations of the pollution. Ma received a firm order to halt the project, which was unnerving the government. He assented, knowing that alienating officials could result in IPE losing favor, or even being shut down.

Ma knows that this delicate dance means progress is slow. Moving hundreds of China’s millions of factories toward compliance, “is only a drop in the bucket,” he admitted to me. IPE, with 37 staffers, cannot monitor all of Chinese manufacturing on its own, and it will need more reform and resources from the government to scale up its approach. State-owned enterprises, too, will need to become more transparent.

At the Catcher tour, the wrap-up meeting in the conference room ended well. Ma smiled and said he was impressed with the factory’s efforts. There was just one matter left to be sorted out: At the end of the disposal system sat a white container about the size of a doghouse, holding the final waste product, which was shipped to a recycler. For Apple and Catcher to receive the zero-discharge rating they sought, IPE would have to confirm that the waste was being properly disposed of offsite. The executives promised to follow up on that, and the mood in the room remained jovial.

In the car ride back to the train station, Ma was reflective. A week earlier, in Beijing, Dell officials had arrived to discuss speeding up their environmental auditing process, challenging Apple for the top spot in IPE’s rankings. “To see what the best companies can do now,” he said optimistically, “it’s just incredible.”